Born and raised in New York City, Shawn Rickenbacker is an architect and creative technologist. He holds a bachelor of Architecture from Syracuse University, a Master of Architecture of the University of Virginia and a Certificate in Advanced Interaction Design from NYU. He is a partner at the design firm Rickenbacker + Leung llc founded in 2005, notable for such projects as Re: Vision Dallas and the Renaissance Ballroom redevelopment in New York.  He also is co - founder of the technology, data and design consultancy Urban Data + Design, currently working on the design and implementation of ambient and embedded technologies in the physical environment intended to enhance spatial awareness and cognition.  As a founder of UDD he was selected as a Finalist in 2012 to be PopTech Social Innovation Fellow, a one-of-a-kind Fellows program designed for one-of-a-kind social innovators who have the talent, passion and potential to change the world.

Shawn has lectured throughout the US, Canada, London, Helsinki, Barcelona and Havana on his research and professional work which has also received numerous awards, exhibited and appeared in The New York Times, CNN International, Global Architecture and Fast Company to name a few. He's taught in London at the AA, Ohio State, Syracuse University and is currently an adjunct faculty member at the University of Pennsylvania Graduate School of Design where he teaches design studios and spatial physical computing There he also heads the Futures Interaction Lab, a Motorola funded design research lab, conducting research on the convergence of digital and physical space. In April 2015 he was the organizer of the Motorola / University of Pennsylvania Stuart Weitzman School of Design Symposium Non-Discrete Architectures: Digital Prosthetics, Connectivity, and Augmentation, which explored the evolution of new spatial design paradigms addressing the multi-dimensional world and the culture of technology, including coding, data, spatial networks, robotics and augmented space. 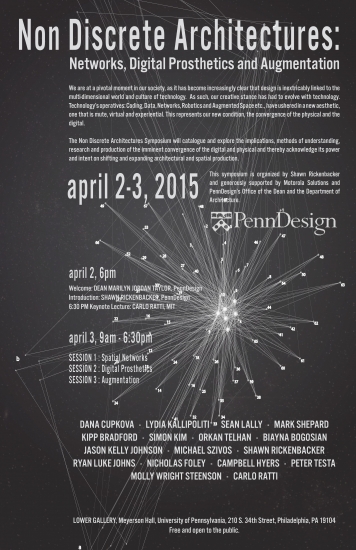