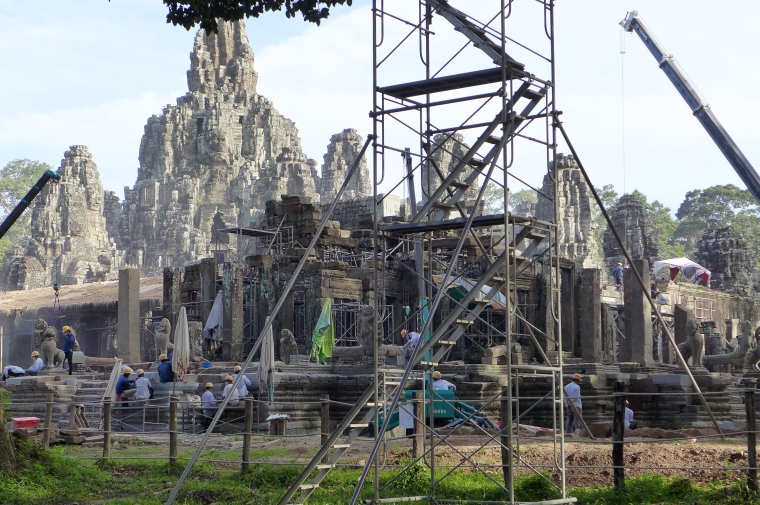 Conservation efforts under way at Bayon Temple at Angkor, Cambodia, one of the UNESCO World Heritage sites studied by Lynn Meskell and her students.
Photo: Lynn Meskell 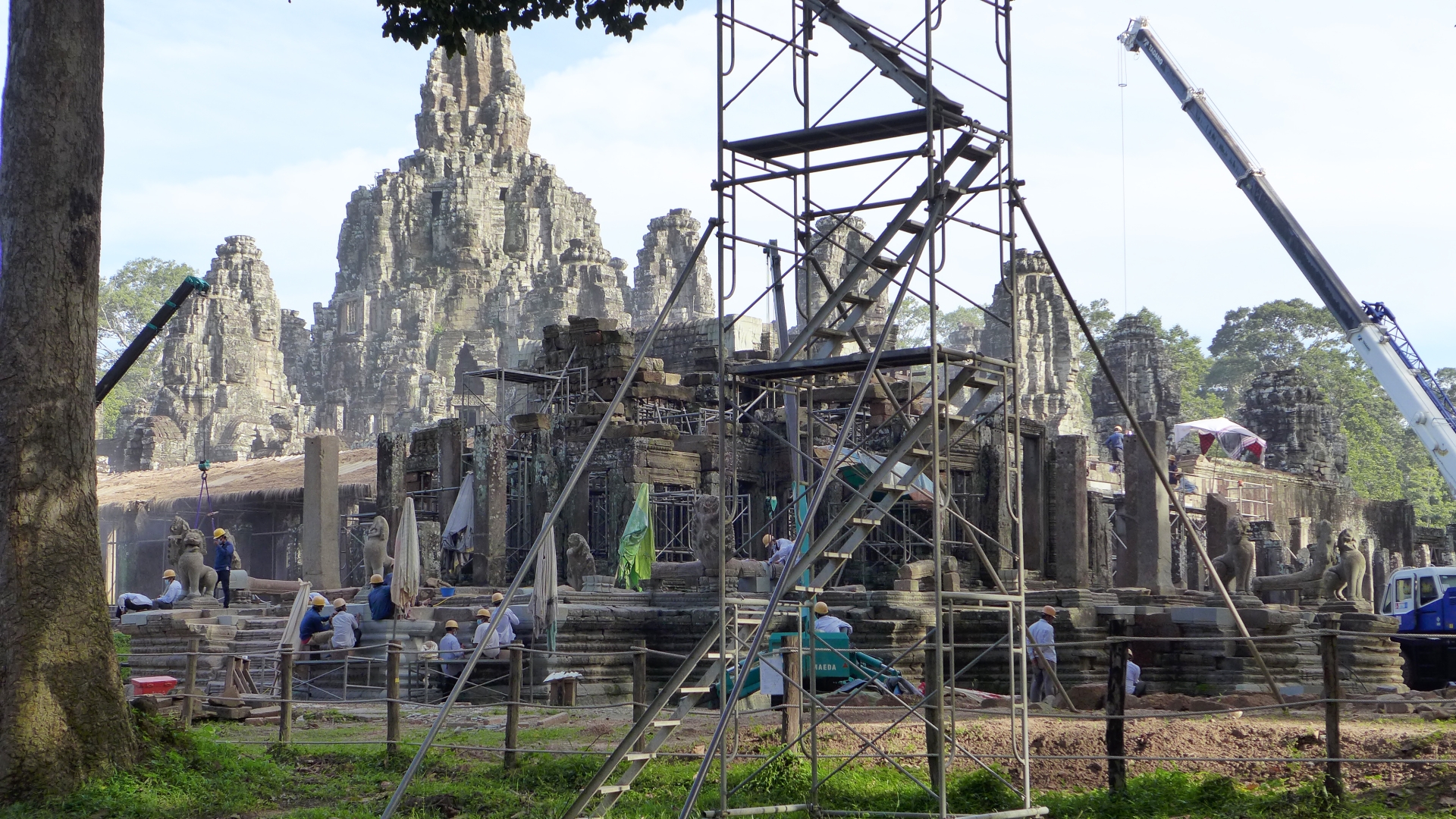 Conservation efforts under way at Bayon Temple at Angkor, Cambodia, one of the UNESCO World Heritage sites studied by Lynn Meskell and her students.
Photo: Lynn Meskell

UNESCO—the United Nations Educational, Scientific, and Cultural Organization—was born in London on November 16, 1945, rising from the still-burning embers of the dystopian global conflagration that was World War II. It took upon itself the utopian charge to, in the words of celebrated archaeologist Lynn Meskell, “end global conflict and help the world rebuild materially and morally.” In her award-winning book A Future in Ruins: UNESCO, World Heritage, and the Dream of Peace (2018), Meskell—who was appointed Penn Integrates Knowledge University Professor and the Richard D. Green University Professor in 2020—documents, analyzes, and critiques UNESCO and its World Heritage program, which recognizes and protects landmark sites of profound cultural, historical, or scientific significance. For the Fall 2021 semester, Meskell is teaching World Heritage in Global Conflict, in which she and 18 students—undergraduate and graduate from across the University, including Weitzman’s Graduate Program in Historic Preservation—are deepening the investigations she documented in A Future in Ruins and bringing them to the present.

In the book, Meskell draws lessons from UNESCO’s trajectory from an organization shaped by the loftiest humanistic ideals of the mid-20th century to its 21st-century reality as an entity compromised and constrained by the influence and actions of superpower states, corporations, non-state actors such ISIS, and the shortcomings of UNESCO’s formative perspectives on a world composed, as characterized by Meskell, of “the West and the rest.” A surprising revelation of the book is that while so many World Heritage sites are ancient and known to us, in part or in total, through the efforts of archaeologists, UNESCO does not “routinely engage prominent archaeologists in major intellectual projects.”

Among Meskell’s overarching goals for World Heritage in Global Conflict is to impart to students an understanding that while “We think we know so much about how World Heritage and UNESCO work” since so many of the most famous archaeological sites are on the World Heritage list, “we, as practitioners, are not directly involved with UNESCO and don’t know how UNESCO works.”

“I want the students to become world citizens who can never be accused of ‘privileging the stones’—of caring about places, not people.”

In her syllabus for the course, Meskell writes, “Heritage is always political” and notes that for UNESCO and World Heritage, as intergovernmental systems, the inherent and growing politicization of heritage is “especially fraught”–concluding that UNESCO “has found its own history increasingly entwined with that of international politics and violence.” For example, while the World Heritage campaign (begun in 1992) to save Angkor Wat—the “city of temples” in northwest Cambodia built in the 12th century that remains the largest religious complex in the world—is upheld by UNESCO as one of its greatest achievements, in conserving the temples UNESCO “legitimated the brutal Khmer Rouge, and in the decades to follow, harsh restrictions were placed on local communities by state authorities.”

UNESCO and World Heritage have become mired in conflict, Meskell shows. To counter this while transcending Western-centric perspectives, reemphasizing long-term “cultural understanding and uplift, a culture of peace no less” rather than a narrow emphasis on “short-term technical assistance,” and ensuring that “the people who matter most”—those whose heritage is being conserved—are placed at the center of World Heritage efforts, Meskell prescribes recentering “UNESCO’s foundational utopian promise,” continuing to provide financial, technological, and professional assistance, and adding a “one-world archaeology focused on the greatest civilizations of the ancient world” to produce  “a new slant on a future in ruins.”

The course at Penn embodies Meskell’s prescription for UNESCO. Its content draws upon the work of philosophers, legal theorists, international lawyers, moral philosophers, architects, conservation managers, anthropologists, political scientists, and economists—"the full range of disciplines that we need to bring to bear in thinking about and working with monuments, World Heritage, and conservation.” She is gratified and galvanized that this interdisciplinary approach is reflected in those taking the course, who represent disciplines including international relations, economics, political science, policy, anthropology, architecture, landscape design, historic preservation, and area studies in India, the Middle East, and China.

“I was first intrigued by Dr. Meskell’s course because of her outstanding reputation—she is a powerhouse in the heritage world! Having read some of her work previously, I was excited to get the opportunity to learn from her in-person,” explains Annie Greening, a second-year graduate student in Historic Preservation. “The course offers me a chance to expand my knowledge of preservation and heritage issues beyond the United States, examining the ways conservation policies have played out on the global stage.”

Meskell is gratified, as well, that “the students come from different countries, different backgrounds. It’s their own expertise, backgrounds, their perspectives and their ability to engage their very different disciplines and schools that we have on campus—that is always mind-blowing. I learn a lot from them.”

Looking toward the future of her students’ experience of the class—and, through those students, the future of work in World Heritage and other sites—Meskell says “I want the students to become world citizens who can never be accused of ‘privileging the stones,’ of caring about places, not people. I want them to be people who can engage the full range of ideas but also do something practical: excavate and preserve a site when they are invited. And Penn is the leading place for this. That’s why I came here.”