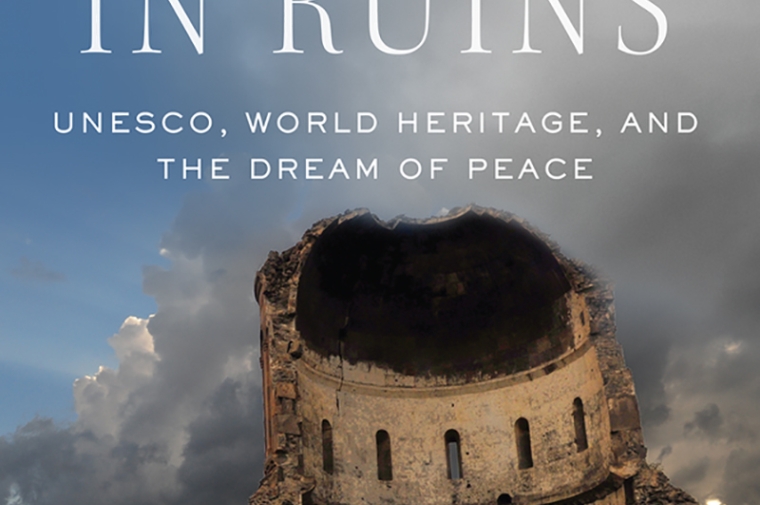 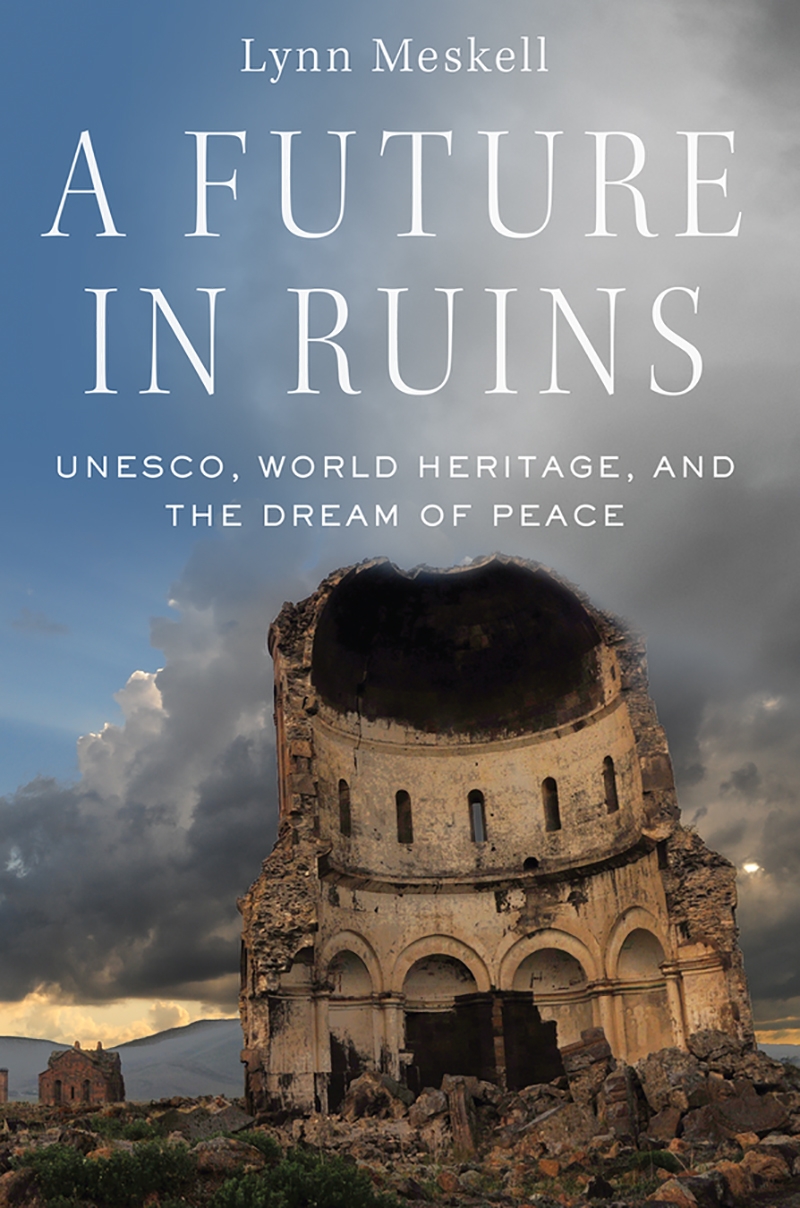 A recent book by Lynn Meskell, a newly appointed Penn Integrates Knowledge Professor with an appointment in the Graduate Program in Historic Preservation, lays out the complex history of UNESCO and its World Heritage program. In an excerpt from A Future in Ruins: UNESCO, World Heritage, and the Dream of Peace, Meskell writes that for “conservation to fulfill its midcentury promise for the future, it must strive to include the people who matter most, whose heritage it is, and to consider those who have most to win or lose in the fate of World Heritage sites.”

It is not possible to fathom the creation of UNESCO’s programs without understanding the history of UNESCO itself, its dystopian beginnings, and its utopian promise. In autumn 1942 the Allies set up a Conference of Allied Ministers of Education in London and assembled authorities from the field of education from eight governments then in exile. They were there to plan the reconstruction of education systems in a liberated Europe. Libraries and books were needed, coupled with an ideological program to combat the fascist propaganda that had poisoned the continent. Cultural reconstruction was also on the agenda in the face of international outrage at Nazi looting and the decimation of Europe’s artistic treasures and heritage. By 1943 the idea of a permanent organization addressing educational and cultural reconstruction began to take shape. In an attempt to sum up the vision and mission of UNESCO in a single sentence, one historian replied, “Following the catastrophes of the twentieth century, there is a need to reconstruct and above all to educate, in a scientific frame of mind, human beings that are equal and different, possessing the means to communicate, in order to protect and safeguard peace, the diversity of cultures and ultimately life itself.” There is still much in this explanation that remains relevant today.

Ruins were also on the agenda for reconstruction. But it was not simply that great buildings, museums, and art were affected by the war and required rehabilitation. It was the regulation of the past itself, and how it might be recovered, that was deemed part of a new world order. How archaeological excavations were conducted around the world and the resulting discoveries disseminated also required restructuring. Ultimately, archaeology’s spoils were to be divided up for Western advantage, echoing earlier recommendations made by the League of Nations and its International Committee for Intellectual Cooperation. The past would be managed for the future. UNESCO capitalized upon an already existing momentum for a world-making project devoted to humanity’s heritage. What followed was an inevitable progression from the vast conservation and restoration efforts needed in the wake of destruction after two world wars toward a more lasting project of rehabilitation and recovery. Many critical accounts and analyses of UNESCO have been written, coupled with official histories and narratives by well-placed insiders. Together they tell the story of an imperfect organization that began with midcentury optimism but rapidly devolved from an assembly of statesmen to a tyranny of states. Originally a globally oriented organization, UNESCO was transformed into an intergovernmental agency, a mere shadow of its former ambition for a world peace and mutual understanding between peoples. The overreach of powerful governments has come to permeate all aspects of its functioning. This is reflected in the workings of many of its high-profile programs, including World Heritage–the program that seeks to identify, protect, and preserve outstanding cultural and natural heritage sites around the world. While there are considerable problems, as this book reveals, they should not detract from UNESCO’s achievements in creating a planetary concern for heritage preservation and its ability, however circumscribed, to exert pressure on its Member States to honor the treaties that they have ratified.

While there are considerable problems . . . they should not detract from UNESCO’s achievements in creating a planetary concern for heritage preservation.

Entreating the world to conserve its cultural and natural places in the face of escalating industrialization and destruction can surely only be a positive step, yet how nations mobilize that call and at whose expense reveals a more complex dilemma. For example, the campaign to save the Cambodian site of Angkor is upheld by UNESCO as one of its greatest conservation achievements. Yet in conserving the temples the organization also legitimated the brutal Khmer Rouge, and in the decades to follow, harsh restrictions were placed on local communities by state authorities. These are the complicated stories of conservation, the underneath of things, that UNESCO cannot officially recount, since the nation-state is the ultimate arbiter of World Heritage. That tension between international aspiration and national machination on the ground constitutes a central strand that runs throughout this book, and while such statist self-interest has been there since UNESCO’s beginnings, the politico-economic intercalations have multiplied over the decades. Given UNESCO’s founding and purpose, the organization is required to tell the story of successful salvage; it cannot afford to dwell in the messiness of history.

UNESCO’s major contribution may be its pioneering of international legal instruments such as the 1972 World Heritage Convention. Perhaps more subtle is its development of a body of general principles and customary norms of international law in the field of cultural heritage protection. Its legal framing, resting upon an assembly of States Parties, provides its structure but also its limitation, premised on the goodwill and civility of states, both to each other and to their citizens. In a world where nonstate actors are now some of its most destructive combatants, the agencies of the United Nations have struggled to make adequate provision. UNESCO’s inability to mediate during the destruction of religious sites in Mali and ongoing assaults in Syria, to name just two settings, remains a conundrum. Prosecuting one individual for war crimes against cultural property seems to lose sight of the larger impetus for attacks in the first place. UNESCO’s failure to censure the illegal occupation in Crimea or the bombardment of Yemen, both perpetrated by its Member States in breach of various international treaties, reveals further fatal shortcomings.

Much valuable research on the World Heritage Convention has appeared since its establishment in 1972, from a range of different disciplines and perspectives. Academics, activists, local communities, and indigenous peoples have, however, expressed dissatisfaction with UNESCO’s philosophies, procedures, regulations, impacts, and exclusions. It is not only issues of nationalism and sovereignty that rankle, but the inability of today’s World Heritage regime to incorporate the living aspects of heritage that necessitate rights of inclusion, access, use, and benefits. This view further bolsters the point that the organization cannot continue to privilege the technical, but must revisit its early commitments to creating a better world. In some cases that may entail not inscribing sites on a list but rather allowing groups to determine their own path for heritage. For UNESCO’s part it may mean intervening more strongly when its Member States attempt to forcibly relocate people, refuse to collaborate with them or include them in World Heritage processes, or fail to consider their needs for site use and management. For conservation to fulfill its midcentury promise for the future, it must strive to include the people who matter most, whose heritage it is, and to consider those who have most to win or lose in the fate of World Heritage sites. And finally, we have to be more attendant to history, to the actions of empires and nations that still influence the future of sites and regions, and specifically those conflicts that continue to haunt and recur. We forget that heritage at our peril.