Why do we save white monuments and let Black history rot?

by Starr Herr-Cardillo (MSHP '17) and Research Associate for the Weitzman School of Design department of Historic Preservation. This essay first appeared in WHHY

The statue of former Police Commissioner and Mayor Frank Rizzo, on Saturday, became a target for protesters’ righteous anger as they defaced it, set it ablaze, and attempted to pull the hulking mass to the ground. By 8:00 a.m. Sunday, fresh from a power wash, the statue gleamed. It would soon be encircled by a dense blockade of more than 50 police officers and Pennsylvania state troopers—an extravagant use of taxpayer dollars, as some pointed out—a monumental statement refreshed, a projection of Philadelphia’s municipal priorities for restoring an image of order.

As Queen Muse put it in an op-ed for Philadelphia Magazine calling for the immediate removal of the statue, “Whether the decision was intentional or haphazard, by rushing to have the Rizzo statue cleaned this weekend, Kenney sent a message to marginalized residents of this city that the issues that undergird their pain are not important to him.”

Yesterday morning, I scrolled through my social media feeds and expressions of distress and dismay that the heart of our city, and cities across the country, had been torn to pieces. It is hard to see a place you love smashed up, bruised, burned. But it is unbearable to see Black fathers, mothers, sons, and daughters brutalized and killed by police on what feels like a never-ending loop, reduced to pixels and funneled straight into our most personal of devices, week upon week, month upon month, and year upon year.

It goes without saying: damage to buildings is repairable, the murder and psychological torment inflicted by police brutality is not.

As someone working in the field of historic preservation, I’m used to seeing—and am occasionally criticized for—posts that overemphasize buildings, affirming their importance, mourning their ongoing or imminent destruction. Windows were smashed, walls were tagged, and structures were burned this weekend, but this moment is not about buildings.

This moment in time demands of us a more critical reflection. As we sweep up the glass, and assess the damage, we must reflect on what our environments—buildings, statues, and public spaces—symbolize, who they include and exclude, and what values they convey.

In protests across the country this weekend, we saw anger directed at police precincts, corporate stores, government buildings, and unequivocal monuments to racism, like the Market House in Fayettville—where human beings were bought and sold—the headquarters of the Daughters of the Confederacy in Richmond, and here, the monument to a racist, bigoted former mayor that looms from Thomas Paine Plaza, a historical site of protest, and salutes City Hall.

We need to take this as a moment to reflect on the legacy of racism in our country, the narratives and values that are embodied in architecture and monuments, and why they are being challenged right now. We need to remember how political uprisings in the past have brought about change.

Part of what’s being communicated through this unrest is the fact that the current way of operating is disproportionately and violently harming Black Americans and people of color. This violence takes the form of police brutality, as it did this month for George Floyd and Breonna Taylor, but also manifests in lack of access to healthcare, disinvestment, predatory lending, poverty wages and income gaps, homelessness, ICE raids, and inhumane immigration policies.

We can sweep up broken glass and restore the facades in Center City, but that doesn’t change the fact that during the 1950s and 60s, Philadelphia and other urban centers were left completely defunded and neglected during white flight, or that in the ensuing decades they have been taken back over, gentrified and tidied for a white audience, their spaces policed accordingly. 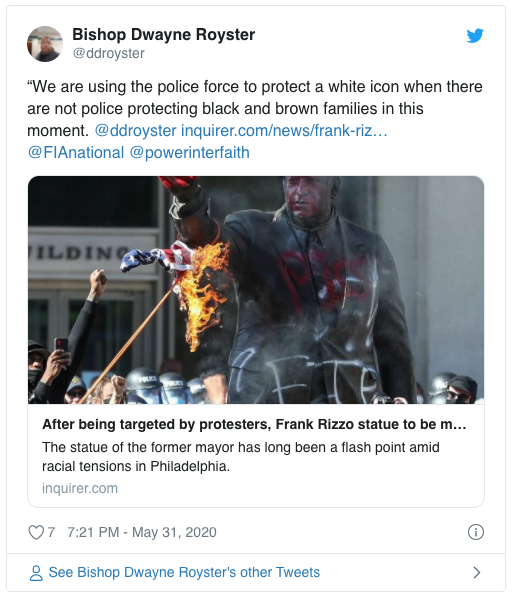 Our cities and environments are shaped by prevailing value systems, by systems of power. And preservation—what we deem valuable and the “official” narratives we attach to it—is indelibly connected.

Fixating on buildings at this moment is inappropriate. It’s not about restoring facades and restoring normalcy. We need to think about what these historic events say about where we are as a society. We need to work inclusively to rebuild our cities and institutions so that they work for all of us.

Just as preservation recognizes that buildings embody and convey cultural values, it should recognize this kind of damage to them for what it is: the rightfully furious and desperate backlash to the failure of our system to recognize the humanity of all of our fellow citizens.

How far would the resources that have been put towards protecting the statue of a racist go towards preserving sites related to Black history? Rasheda Phillips, creator of AfroFuturist Affair/Black Quantum Futurism and Community Futures Lab, pointed out the pattern of hand-off neglect that has defined much of the city’s approach to Black history to date.

“They’re so worried about property but won’t protect the John Coltrane house, Dox Thrash house, the Checker club or any number of historical Black properties and monuments destroyed by the violence of developers and city neglect.” 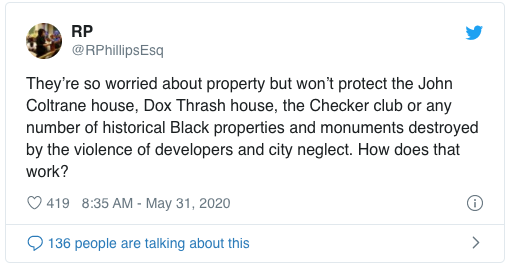 How can we progress from here? From a preservation and cultural heritage standpoint, there’s a lot of work to do. First, we need to reckon with the fact that the movement, particularly in Philadelphia, is overwhelmingly white. It shouldn’t be. Both formal preservation education and local advocacy efforts have to become more inclusive, accessible, and relevant.

We can also ease back on the obsession with architectural purity, which favors high style architecture, wealthier neighborhoods, and places unnecessary burdens on lower income households and owners by imposing strict guidelines and review processes.

We have to work to expand the basic criteria used to recognize places as important, which emphasize connections to important historical events, architects, and people, reinforcing all of the usual (white and male) historical biases. We need to come up with ways to recognize spaces that aren’t buildings, local institutions, buildings less than 50 years old, and places that undergo frequent change in order to survive.

We need to include different narratives, invite new authors, and figure out how to communicate different stories in unexpected places, recognizing that there are far too few sites of “achievement” and “progress” and the sort of superlative, feel-good stories that we’re used to that represent all classes, races, genders, or sexual orientation. Intersecting identities have always informed who is and isn’t able to contribute, whose contributions are recognized, and whose are given credibility.

We must eschew the illusion of neutrality, engage in anti-gentrification activism, and support neighborhood organizations that are already doing the work. We need to be critical and realistic about the role preservation plays and has played in gentrification and displacement.

And we can be smarter, eager, and much more proactive about working intersectionally with other urgent social justice-oriented causes like environmental justice, sustainability, climate change, and affordable housing by championing creative and flexible adaptive reuse, material reuse, property tax deferrals, and community land trusts.

When we are able to move forward and begin to recover from this unrest and from the coronavirus pandemic, we cannot look away from the appalling inequity that has been so brazenly laid bare. We need to see these well-intentioned goals as more than just goals; we need to look beyond buildings, and we need to see this work as imperative.

Preservation Roundtable: Preserving the Recent Past