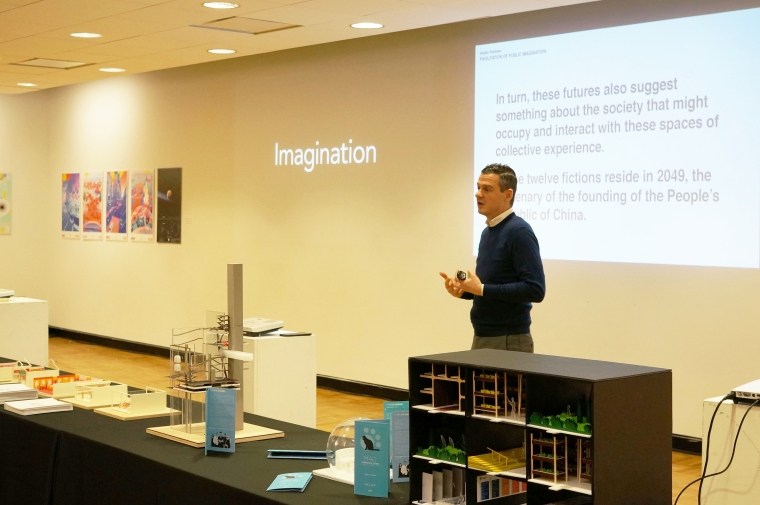 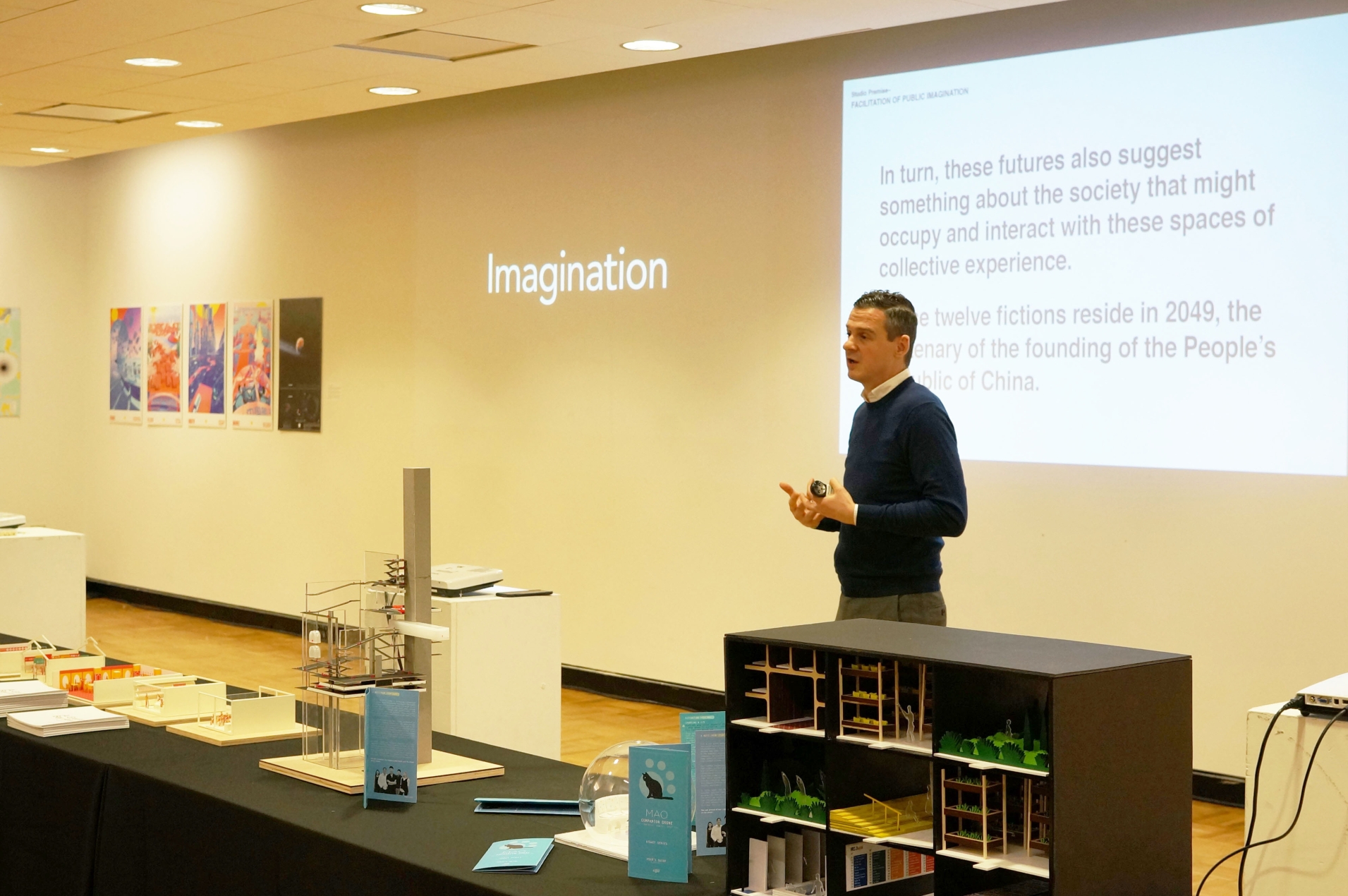 The video opens with a family sniffling sadly before the portrait of a departed loved one. A boy walks through a corridor and embraces his mother, a star dimly illuminated above her head. Together they make their way through a park. They read in the café and play in the playground. Other visitors shuffle by, some with stars above their heads. The boy grows up, gets married, and has a child of his own. They return again to visit his mother. She hasn’t aged. The video fades out to show the family in front of a computer screen. “Order now,” it says. It’s tagged with the name Beyond City Development, and the seal of the People’s Republic of China: Ministry of Posthuman.

“It’s a physical space,” explains Anni Lei (MLA’18), who created the video in a Landscape Architecture studio at the University of Pennsylvania Stuart Weitzman School of Design last fall. “It’s an actual theme park that allows dead people to retrieve their physical body for a limited time and join their relatives and friends in the physical realm.”

Lei thinks of her project more as urban design than landscape architecture. She began by thinking about the role of the cemetery as a public space. Then she thought a generation ahead, and even further: Humans are carbon-based now, but how could cemeteries be designed for silicon-based lifeforms?

That kind of speculation was the whole point of the studio, which was focused on the emerging megaregion around China’s Pearl River Delta, says Associate Professor Christopher Marcinkoski. The studio, A Greater Bay Area? (Or Urban Futures with Chinese Characteristics), was designed as an opportunity for students to engage with a region that is far larger than what they may have worked with in the past, and think through how it might work in the future. It grew out of a desire “to use the studio as a bit of a place of experimentation as opposed to a place of problem-solving,” Marcinkosi says.

Or, as he put it in the course materials, “This studio is NOT interested in attempting to comprehensively describe or enable the future Greater Bay Area. Rather, we will speculate upon what uniquely Chinese, technologically conditioned urban futures might look like a full generation from today.”

Hence videos like Lei’s, imagining the possibility of a digital afterlife. Marcinkoski says, “What would it mean for a country of 1.2 billion people if those people lived forever?”

“We were trying to think of transportation networks, ecological structures, employment opportunities and cultural issues that would work for a massive organism of over 100 million people.”


Immortality was one thematic focus of the studio. Others included Identity, Imagination, Patriotism, Ecology, and Surveillance. Faye Nixon’s (MLA/MArch ’19) project imagined a future in which every citizen of the Greater Bay Area was issued an autonomous surveillance drone; to take off some of the sting of being constantly monitored, the drone, called MAO PENGYOU (“Cat Friend”), takes on “the disarming form of a cuddly house cat.”

“The intent was very much to have the students immerse themselves in a place that they could never fully know, but then figure out how they could engage within it,” Marcinkoski says. “The projects were really intended to open up and say, If this happened, what does this mean? It was really about trying to promote and start a conversation; to engage the public imagination.”

The studio was one in a series of studios focused on urbanization in Chinese megaregions which were offered as part of the Weitzman School China Research Initiative. A previous studio, focused on the Jing-Jin-Ji megaregion around Beijing, was led in 2016 by Richard Weller, professor and chair of landscape architecture and Meyerson Chair of Urbanism, with Professor of Architecture and former dean Marilyn Jordan Taylor, and Practice Professor of City and Regional Planning Robert Yaro.

“The studio looked at what kind of planning ideas and policies and forms it would take if you wanted to kickstart a megaregion,” Weller says. “We were trying to think of transportation networks, ecological structures, employment opportunities and cultural issues that would work for a massive organism of over 100 million people.”

In a country with a centralized government as powerful as China’s, massive and rapid changes to the landscape are possible, Weller says. The studios were designed to think through how urbanized environments might change at the regional scale as well as the local.

Weller also led a Fall 2017 studio with Valerio Morabito, adjunct professor of landscape architecture on China. Entitled Beautiful China, it explored traditional and contemporary notions of beauty and how they can be critically applied in the Chinese landscape today. Students were asked to redesign Tiananmen Square as a “People’s Park.” “Our Chinese students were particulary wary of how to approach such a politically sensitive place,” Weller notes.

The activities of the Weitzman School China Research Initiative aren’t confined to studio work. Since 2015, faculty members in landscape architecture, architecture, city and regional planning, and historic preservation have organized various exhibitions and symposia in China. Next month, Weller will return to the topic of “Beautiful China” in a one-day landscape architecture forum as part of a three-day event at the Central Academy of Fine Arts in Beijing. The topic refers to President Xi Jinping’s declaration in a 2017 speech that the state would work toward creating a beautiful and clean environment across China. But as yet, Weller says, the meaning of “Beautiful China” is still undetermined: “No one really knows what it is, and it seems to mean all things to all people” he says. As part of the Penn-China Design Dialogues, the forum will bring together younger and older generations of Chinese scholars to talk through the concept. The forum will be held March 8, and is free and open to the public.

The landscape and planning studios and the design dialogues are working on some of the same questions.

“What’s a landscape of modernity with Chinese characteristics?” Weller says. “It’s all about the anxiety of losing identity or changing identity as people get swept up from agricultural environments and move into cities. And while that’s exhilarating, it’s also disorienting. So the landscape in China is sort of an anchor of identity.”

Thanks to AECOM for their continued support of this studio.