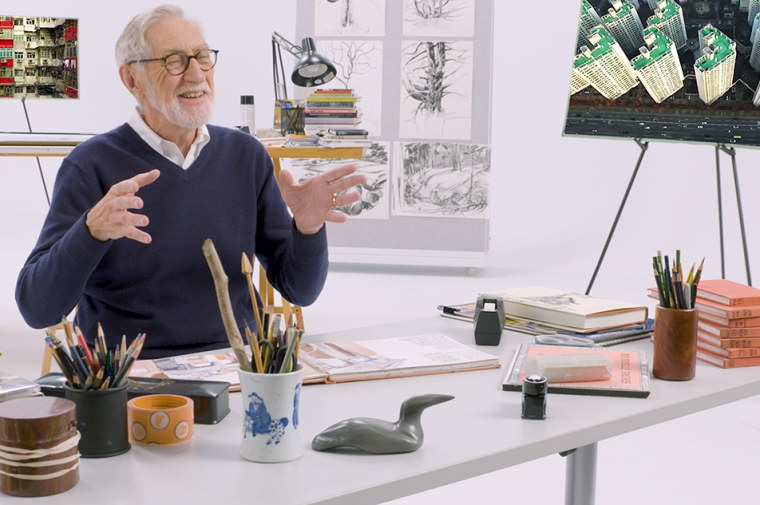 Laurie Olin on the set of 'Sitting Still'

Laurie Olin on the set of 'Sitting Still'

To be a designer, says Laurie Olin, you have to be an optimist.

“If you’re not an optimist, you’re a preservationist,” he explains during an interview for Sitting Still, a new documentary in production for release next year. “If I didn’t think I could make the world better through my efforts why would I do this?”

Described by some as an “irreverent urban warrior” with a “profoundly social vision,” Olin, a distinguished teacher, author, artist, and one of the most renowned landscape architects practicing today, is the focus of the in-the-works film.

“The title, Sitting Still, grew from Olin saying that one of the best methods devised to learn from the world is to actually be in it and sit still,” says Gina Angelone, the filmmaker. “That’s what Laurie does: He wanders out into the world with a sketchbook in hand, sits, draws and observes life.”

Ironic indeed, Angelone also notes that there is a “double meaning” in the film’s name.

“Here is a man in his 80th year who is constantly jumping an airplane headed to some far-away place. He quite literally never stops moving,” she says. “I really like the idea that for 90-minutes, this very dynamic man will sit still and talk about his unique take on the world, his deeply social concerns and his push for art and humanity in design.”

Olin, practice professor emeritus of landscape architecture at the University of Pennsylvania Stuart Weitzman School of Design, where he taught for 40-plus years, is known for his “people-centric” landscapes gracing cities around the world. He has guided many signature projects as founding principal of the Philadelphia-based OLIN, including the Washington Monument Grounds in Washington, D.C., Bryant Park in New York City, the Getty Center in Los Angeles, Apple Park in Cupertino, California, and the Barnes Foundation in Philadelphia. For four decades, Olin, who received an honorary Doctor of Arts at Penn this year, has also contributed significantly to the master planning and development of the University’s campus.

Angelone, who has done a majority of the filming in Philadelphia, at OLIN’s offices, and on Penn’s campus, explains she is not cataloguing the award-winning landscape architect’s sites. Instead, she says, “this is a film that gets inside the mind of an iconoclast and urban visionary and asks him the big questions about how people connect to place.”

“To make a film on this great American and global leader in landscape architecture is a truly wonderful idea,” says Richard Weller, professor and chair of landscape architecture, Meyerson Chair of Urbanism, and co-executive director of the Ian L. McHarg Center for Urbanism and Ecology. “Honored with a Medal of Arts from President Obama in 2012, Laurie Olin is quite probably the world’s preeminent living landscape architect.”

David Brownlee, the Frances Shapiro-Weitzenhoffer Professor of 19th Century European Art in Penn’s School of Arts and Sciences, and a historian of modern architecture, who has worked with Olin for years, notes a similar sentiment in support of the film.

“[Olin’s] work does what great art must do: It makes us see with our eyes and feel with our hearts the otherwise unnoticeable things that surround us—and then guides us with its invention and imagination to conceive new things that human hands and minds can make,” says Brownlee. “In short, I think that the proposed film, which itself promises to be a significant work of art, can show to a wide public audience, as well as students and educators, what one man’s art has done—and to give them confidence that art can do still more.”

Angelone has an inkling the film will have a broad spectrum of interest, outside of just folks working in urban design or landscape architecture. From film festivals to showcasing public screenings for communities at the parks Olin has designed, her hope is that the film helps viewers understand how landscape defines and unifies the human experience.

“Especially when we can sit still and take it in,” she says.

For more information about Sitting Still, and to stay up to date on the documentary’s latest developments, visit www.sittingstillmovie.com.