Excerpt: "Designed for Disease?" in 'LA+' 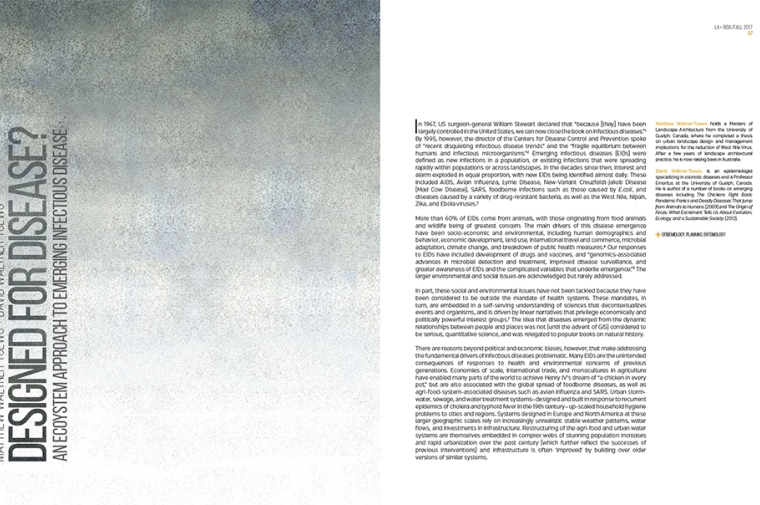 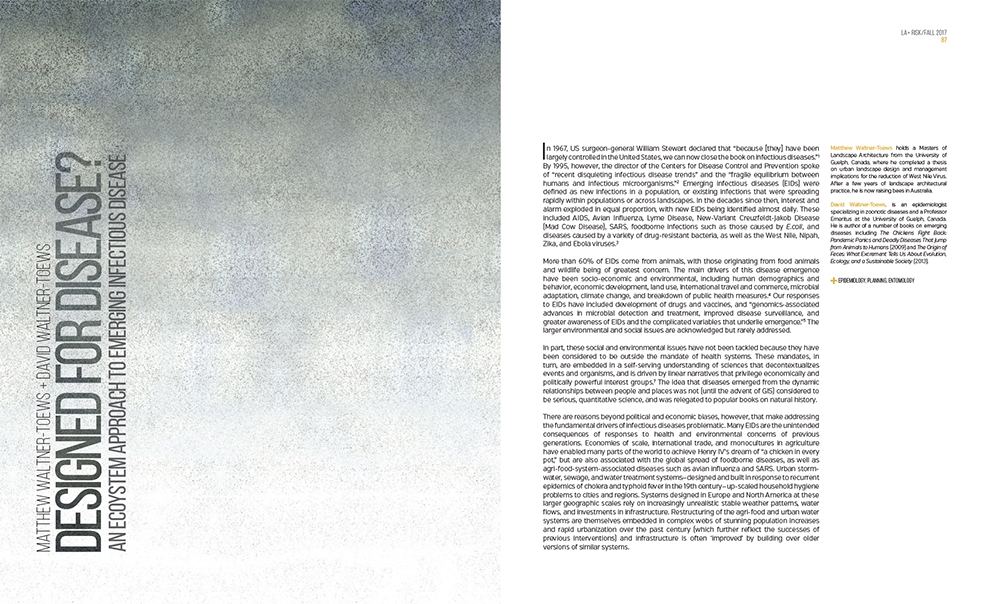 This excerpt of “Designed for Disease? An Ecosytem Approach to Emerging Infectious Disease,” by Matthew Waltner-Toews and David Waltner-Toews, was originally published in LA+ RISK, the Fall 2017 issue of he interdisciplinary landscape architectural journal of the Stuart Weitzman School of Design. Matthew Waltner-Toews holds a Master of Landscape Architecture from the University of Guelph, Canada, where he completed a thesis on urban landscape design and management implications for the reduction of West Nile Virus. After a few years of landscape architectural practice, he is now raising bees in Australia. David Waltner-Toews is an epidemiologist specializing in zoonotic diseases and a professor emeritus at the University of Guelph, Canada. He is author of a number of books on emerging diseases including The Chickens Fight Back: Pandemic Panics and Deadly Diseases That Jump from Animals to Humans (2009) and The Origin of Feces: What Excrement Tells Us About Evolution, Ecology, and a Sustainable Society (2013).

In 1967, US surgeon-general William Stewart declared that “because [they] have been largely controlled in the United States, we can now close the book on infectious diseases.”(1) By 1995, however, the director of the Centers for Disease Control and Prevention spoke of “recent disquieting infectious disease trends” and the “fragile equilibrium between humans and infectious microorganisms.”(2) Emerging infectious diseases (EIDs) were defined as new infections in a population, or existing infections that were spreading rapidly within populations or across landscapes. In the decades since then, interest and alarm exploded in equal proportion, with new EIDs being identified almost daily. These included AIDS, Avian Influenza, Lyme Disease, New-Variant Creuzfeldt-Jakob Disease (Mad Cow Disease), SARS, foodborne infections such as those caused by E.coli, and diseases caused by a variety of drug-resistant bacteria, as well as the West Nile, Nipah, Zika, and Ebola viruses.(3)

More than 60% of EIDs come from animals, with those originating from food animals and wildlife being of greatest concern. The main driver of this disease emergence have been socio-economic and environmental, including human de9mographics and behavior, economic development, land use, international travel and commerce, microbial adaptation, climate change, and breakdown of public health measures.(4) Our responses to EIDs have included development of drugs and vaccines, and “genomics-associated advances in microbial detection and treatment, improved disease surveillance, and greater awareness of EIDs and the complicated variables that underlie emergence.”(5) The larger environmental and social issues are acknowledged but rarely addressed.

In part, these social and environmental issues have not been tackled because they have been considered to be outside the mandate of health systems. These mandates, in turn, are embedded in a self-serving understanding of sciences that decontextualizes events and organisms, and is driven by linear narratives that privilege economically and politically powerful interest groups.(6) The idea that diseases emerged from the dynamic relationships between people and places was not (until the advent of GIS) considered to be serious, quantitative science, and was relegated to popular books on natural history.

There are reasons beyond political and economic biases, however, that make addressing the fundamental drivers of infectious diseases problematic. Many EIDs are the unintended consequences of responses to health and environmental concerns of previous generations. Economies of scale, international trade, and monocultures in agriculture have enabled many parts of the world to achieve Henry IV’s dream of “a chicken in every pot,” but are also associated with the global spread of foodborne diseases, as well as agri-food-system-associated diseases such as avian influenza and SARS. Urban storm-water, sewage, and water treatment systems—designed and built in response to recurrent epidemics of cholera and typhoid fever in the 19th century—up-scaled household hygiene problems to cities and regions. Systems designed in Europe and North America at these larger geographic scales rely on increasingly unrealistic stable weather patterns, water flows, and investments in infrastructure. Restructuring of the agri-food and urban water systems are themselves embedded in complex webs of stunning population increases and rapid urbanization over the past century (which further reflect the successes of previous interventions) and infrastructure is often ‘improved’ by building over older versions of similar systems.

What kind of strategy might enable landscape architects and public health workers to navigate this complex terrain and design reasonable responses? The “ecosystem approach” was developed as an approach to environmental management and sustainability based on ecological thinking and research. Initially articulated by the scientific advisory committee of the International Joint Commission of the Great Lakes Basin, the approach has diversified over time such that it has now come to be applied not only to the study and achievement of outcomes related to biodiversity and species conservation, but also to the health and well-being of selected species, including people. Rooted in a complex systems understanding of the world—where social and ecological variables interact in uncertain and unexpected ways—this approach offers a useful way to think about EIDs and how one might prevent them.(7)

The ecosystem approach entails an integration of systems thinking with public involvement, bringing together interested people from the community with a wide range of experts and professionals. This changes the nature, and evaluation, of allowable evidence, and tends to shift the focus away from what is seen as pure science to something more akin to professional practice. The goal is to achieve sustainable health outcomes through more adept managing of human-environmental interactions.9 In practice, ecosystem approaches to health are grounded in participation by stakeholders living in defined landscapes and ecosystems. This being the case, who speaks for the ecosystems, or the land? Who speaks for the diversity of non-human species that live around us? And if future outbreaks are embedded in complex interactions among ecosystems, non-human species, and people, we might ask: who speaks for how we might design a convivial landscape for future generations?

The full text of the article is available without a subscription from LA+ on Issuu.