Excerpt: Julian Bolleter on Placemaking in Dubai in ‘LA+’ 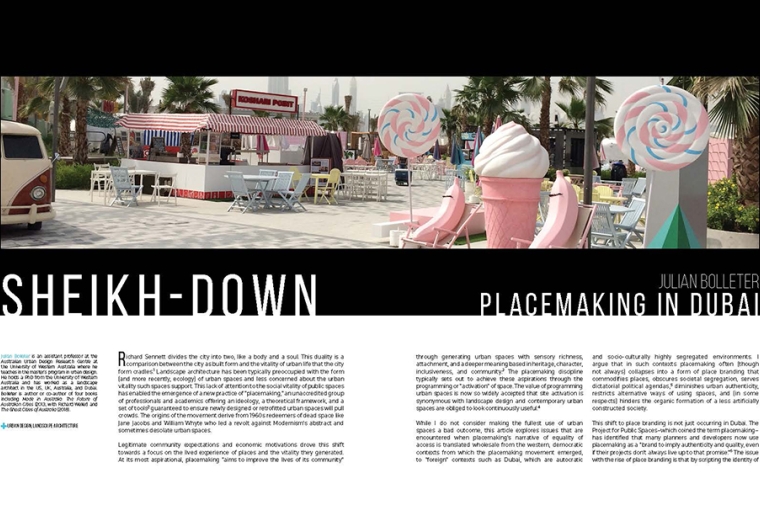 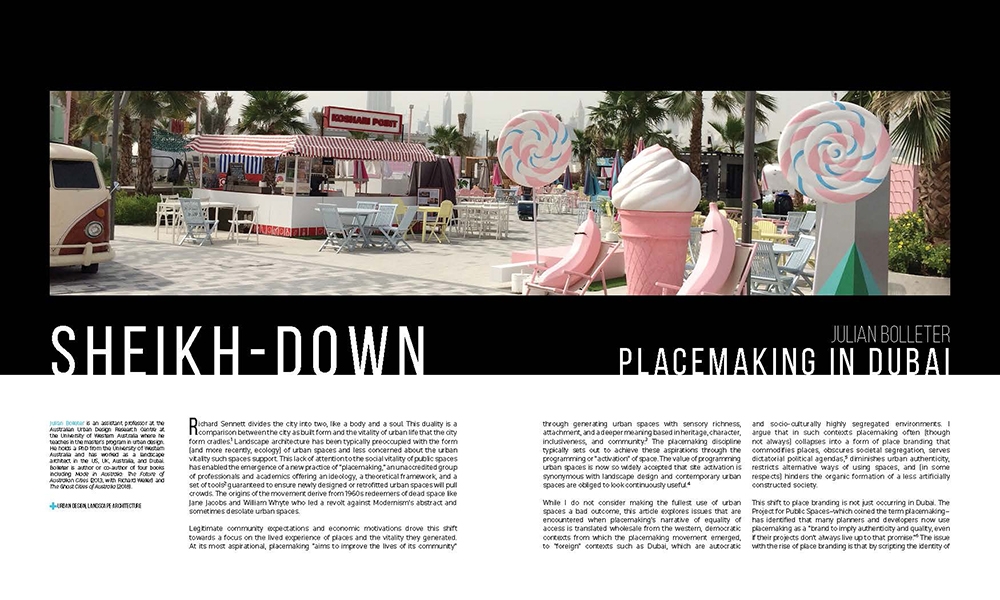 Julian Bolleter is an assistant professor at the Australian Urban Design Research Centre at the University of Western Australia where he teaches in the master’s program in urban design. He holds a PhD from the University of Western Australia and has worked as a landscape architect in the US, UK, Australia, and Dubai. Bolleter is author or co-author of four books including Made in Australia: The Future of Australian Cities (2013, with Richard Weller) and The Ghost Cities of Australia (2018). This excerpt was originally published in LA+ VITALITY, the interdisciplinary landscape architectural journal of the Stuart Weitzman School of Design. The editors are accepting abstracts for LA+ GREEN through March 15.

One of the key values of urban public space is that it carries the potential for random social encounters. Richard Sennet argues that such encounters with difference is the key quality of true urbanity – that the density and diversity of people in public space has a civilizing function that produces tolerance of difference, and enables the formation of new identities.(14) Sennett refers to this ideal as “the open city” in that it frees people from the straitjacket of the “fixed and the familiar, creating a terrain in which they could experiment and expand their experience.”(15)

Clearly, a very multicultural city such as Dubai could function as Sennett suggests; however, this is (often) not the case. Instead, placemaking in Dubai carefully packages urban projects to offer highly choreographed and exclusive experiences for wealthy consumers, whether tourists or locals. Dubai’s unskilled migrant underclass is effectively denied entry to such heavily place-branded projects – not by fences, but by various “soft” strategies including high parking fees, lack of public transport, and aesthetic codes that signify a project’s exclusiveness.(16) The result is that such projects often become “protected playgrounds” that strip away the uncertainty and anonymity from urban life.(17) As Kim Dovey suggests, this “avoidance of risk leads [to the] sanitization” of the urban experience,(18) which otherwise enriches a city’s culture. Dovey advocates that in most urban spaces, spatial and programmatic under-determination is in fact the better approach, as an overdetermined design and management regime often locks in one “right” way of using a place and precludes other ways of using and occupying a space.(19)

It is well known that creativity flourishes best in a unique social environment. One that is stable enough to allow continuity of effort, yet diverse and broad-minded enough to nourish creativity in all its potentially subversive and non-scripted forms.(20) The issue for Sheikh Mohammed is that, as he strives to transition Dubai into a “cultural hub that attracts creative artists,” he needs to allow genuine subversion – subversion which could loosen his hold on power over the longer term.