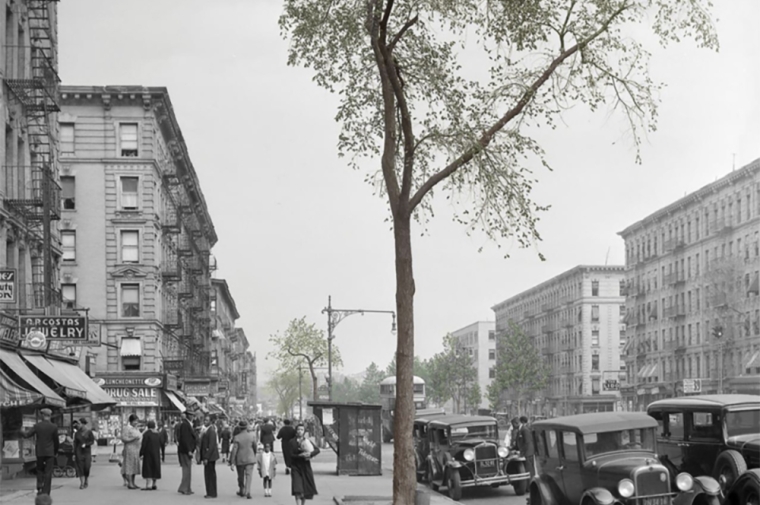 In the academic year starting in 2020, Dümpelmann will be on fellowship at the Institute for Advanced Study (Wissenschaftskolleg) in Berlin. She was formerly an associate and assistant professor at Harvard University, the University of Maryland, and Auburn University. In this Q&A, Dümpelmann discusses her new book, Seeing Trees: A History of Street Trees in New York City and Berlin (Yale University Press, 2019). She previously wrote Flights of Imagination: Aviation, Landscape, Design (University of Virginia Press, 2014). Dümpelmann is now working on an edited volume on the history of sports landscapes. The conversation has been edited for length and clarity.

You’re from Germany but you’ve held a series of posts in American universities. Why have you chosen to live and work in the U.S.?

What took me to the U.S. was a post-doc that began in 2004. I was working in a job in historic preservation which was not permanent, and before that I had been working as a landscape designer in Switzerland. So I had worked in different environments, but what was always missing was the research part and the scholarly part. So I applied for a post-doc with the German Historical Institute in Washington D.C. I didn’t quite know what I was going to do afterwards because I didn’t necessarily want to enter German academia at the time. Some of the other fellows at the Institute were American and on the job market, talking about academic jobs in the U.S., and at some point somebody said, ‘When are you going to apply for a job?’ It seemed like a joke at the time because I did not know anything about the American university system, but then I slept on it and I thought, ‘Well, maybe. Academia in the U.S. is certainly going to be very different. Maybe that’s actually what I do want to do.’ And then I applied for jobs and got my first position at Auburn University in Alabama.

How would you describe your approach to research?

I would describe it as bridging cultural, environmental and landscape history.

It seems like in your new book, trees stand in for a range of ideals and values that are contrasted with a lot of the urban characteristics that people associate with excess and decay. They represent nature and public health and community and all that. How has the meaning of street trees evolved over time?

One interesting thing is that today street trees play a big role in discussions about the urban and global climate, which is, at the moment, a very important topic, of course. Trees contribute to mitigating air pollution and the urban heat island effect. What I found, however, is that this climatological concern always played an important role in discussions about urban trees. It was the guiding factor when trees were first planted systematically along streets in many cities. The other aspect was, of course, the trees’ aesthetics, but in certain contexts, and in the context of New York City, for example, public health issues were very important for the first systematic street tree plantings. You’ll find similar situations in other cities as well. In Berlin, public health reformers in the 1870s and 1880s were talking about the exact same thing. They mentioned parks, but street trees in particular came into the discussion as a primary mediator of the urban climate.

I was interested in the way you talk about street-tree planting and care as ways to construct relationships with the city, and how trees have been used by various communities in making a claim for a right to the city.

One of the examples that I use in the book that you’re probably alluding to is the example of Bedford-Stuyvesant in New York City, where it was the African-American community during the Civil Rights Movement that used trees to reclaim the city. Street tree planting became a means for them to reclaim their right to the streets they were living on and to improve their living environment. They actually managed to get the attention of the mayor at the time. As a result of that, New York City Parks and Recreation instituted a program which gave additional trees to those block associations that had raised the money to plant a couple of trees on their own. So a whole urban program was set into motion by one of the most disenfranchised and discriminated- against parts of New York’s citizenry. This was empowering. In the decades that followed similar grassroots initiatives would occur in a number of communities and cities — Oakland is another example, on the west coast.

It’s a very common thing today as well, and there are other groups, too, who are initiating urban tree planting campaigns. A group called Fallen Fruit which is operating as an art collective has initiated several projects in Los Angeles and beyond. At the beginning they were collecting fallen fruit from trees growing on private property which were shedding their fruit on public land. The fruit would be turned into marmalade at community gatherings, bringing people together. They’ve expanded this initiative and have organized a number of different community initiatives and have actually planted trees as well, with the goal of empowering communities and creating and protecting public space. It’s activism around environmental and social concerns.

Do you have a theory as to why trees have become such an effective tool or symbol in those efforts?

Everybody probably can relate to a tree. Even if, say, you’re living in a desert country, you can still probably relate to a tree, or maybe in that case it’s not strictly speaking a tree but a palm. I think there’s something very primeval about the attachment to another living being that cannot move as we can but that can outlive us human beings. Trees give us a sense of permanency. There is also the fact that we can care for trees. In urban environments they often require our care. I think there’s a relationship between caring for humans and caring for trees, which is also seen in the Civil Rights initiative of tree-planting in New York City. You could say that if you care about humans you probably also care about trees and vice versa. Obviously this is generalizing, but in many cases I think that is true.

You’ve just come to Philadelphia from the Boston area, and I was curious if you’ve had any observations about how the proliferation of street trees is different here than there.

One first impression is that there are a lot more ginkgos here than in Cambridge where I lived. Many trees unfortunately are in a very sad shape, I think. They also have very little space. That’s partly the result of a city initially built for pedestrians, horses and carriages which has over time had to accommodate automobile traffic. Philadelphia’s lots were initially intended to accommodate single houses surrounded by open land. William Penn’s initial plan, which I find quite beautiful, did not foresee the densification which has occurred since then and which, of course, also provides us with a great urban quality. I think the first appearance of street trees on a map depicting Philadelphia is in the late 18th Century. But Philadelphia also lives from its park and square spaces, where there can be a greater concentration of trees than along streets. These are just some first observations after having lived here for not even two months now.

Anything else you want to say about your work at this point?

I think of the projects that I’ve worked on thus far, the tree project was probably one that I enjoyed the most. So there will definitely be more on trees!