This fall, Daniela Fabricius, an architectural theorist and historian, joined Weitzman as an assistant professor in the Department of Architecture. She is teaching Architecture and Labor while working on two books,The Ethics of Calculation: Architecture and Rationalism in Postwar Germany and an edited collection of the work of the critic Jennifer Bloomer. Here, she talks about her explorations of labor, feminism, and work/life balance issues in architecture. 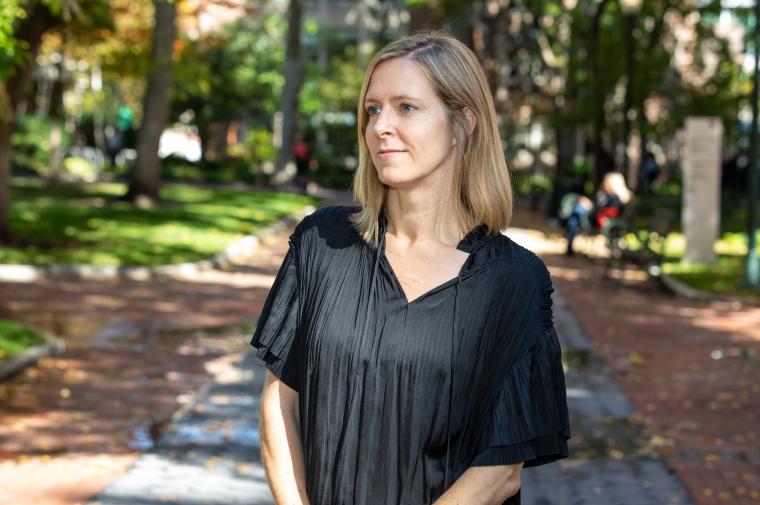 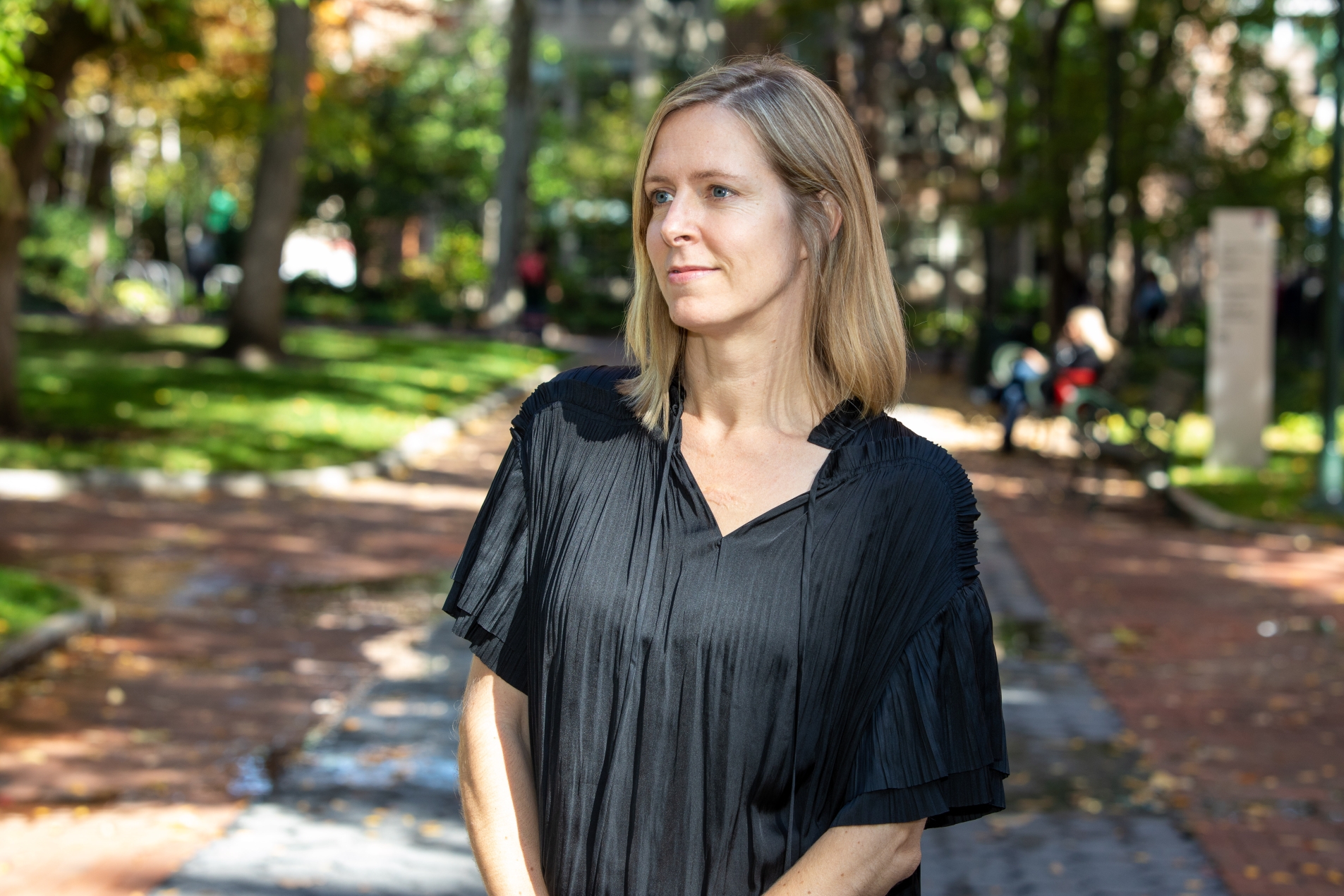 This fall, Daniela Fabricius, an architectural theorist and historian, joined the Weitzman School of Design as an assistant professor in the Department of Architecture. Fabricius, a New York native who lives in Brooklyn, had her first teaching job at Penn more than 15 years ago, under former chair of architecture Detlef Mertins. She holds a PhD in Architectural History and Theory from Princeton University, an MArch from Columbia University, and a BA in Visual Art and Comparative Literature in French and German from Brown University. At Penn, she is teaching “Architecture and Labor” while working on two books, including The Ethics of Calculation: Architecture and Rationalism in Postwar Germany, based on her research at Princeton, and an edited collection of the work of the critic Jennifer Bloomer. She recently spoke with the Weitzman School about her teaching and research. The conversation has been edited.

Can you tell us about your classes?

I’m teaching a course on labor and architecture. There’s a historical component that starts in the 19th century and looks at the architecture that organizes labor, like factories, and how Taylorization and other forms of spatial design and spatial control were used to make labor more efficient. It goes a bit into modernist architecture and to some extent art and how there were some movements like the Russian avant-garde or the Bauhaus in Germany where there was also interest in designing for industrial labor—for the working class.

I also do quite a bit on women and labor and feminism and questions of labor in the household. And then I go into more contemporary issues like migrant workers, the highly exploited labor used in the construction industry today, and how digital tools and digital design have changed the relationship to labor, both on the construction and design side. The students and I also talk a lot about work/life balance issues in architecture and how they see themselves as laborers. They are very interested in talking about that.

I’m also working on a course on what I call spatial reparations. It considers the idea of reparations in a really expanded way: Coming to terms with history, trying to heal with past traumas in different cultural contexts. It’s about how that takes place through space, through landscape and urban design, through buildings and also objects, like in the example of artworks being repatriated. It also incorporates ideas of ecological repair. The idea is that a lot of historical traumas have these different scales of damage and different types of damage and are very complex in terms of how to address them and find a way for societies to move forward. My background is German, and in Germany, facing history is a big part of the culture and there are lots of really interesting examples to look at. So there would be discussions and a comparison of international case studies—how landscape architects, architects, designers and artists have approached this. I’m hoping to get an interdisciplinary group together. It would be an undergraduate course open to the whole university.

What do you want to say about the books you’re working on?

One of them is based on my dissertation, and it’s called The Ethics of Calculation: Architecture and Rationalism in Postwar Germany. It covers the very specific cultural and political construct of postwar West Germany. It starts with the immediate postwar moment, which was characterized by a historical reckoning and very ambivalent feelings around modernism, largely due to the influence of people like Theodor Adorno and the Frankfurt School who were very critical of rationalism in the form of both fascism and capitalism. The discussions around architecture at this time are really interesting and they’re impregnated with the ethical anxiety around how to move forward, and what the role of modernism is. This issue of rationalism and rationalization is kind of at the center of that.

When I was trying to figure out how to talk to students about the influence of feminism in the 90s in architecture, I came across the writing of a woman named Jennifer Bloomer. It’s some of the most experimental, far-out theory writing that I have come across in architecture. It’s just incredible.

Can you unpack rationalism a little bit in the architectural context?

In Germany, rationalism becomes something that’s seen as morally and ethically positive. It’s seen as a way of moving forward from fascism and its myths and lies. There’s something about it that’s seen as compatible with democracy. One strong example was the Ulm School of Design. There was this idea of creating a clear and rational way of designing objects or buildings. Rational in this case meant: efficient, almost a kind of celebration of scarcity and efficiency, a sort of purity. It had a mathematical clarity. It’s the avoidance of arbitrariness or arbitrary will—in German it’s Willkür. Designing according to systems, according to efficiency, with a lack of ornament, and that grew more into systems theory, computational systems, numbers. That’s one part of it. And by the way, that School was sponsored by the American government, so it’s this idea that rational design is ethical and democratic, and is a bulwark against communism also.

Another case study is Berlin in 1968, which is so interesting. Oswald Mathias Ungers’s teaching at the Technical University of Berlin—it’s this crazy, hyperrational urban planning, very much based on the grid, kind of technocratic, very flat, mathematical, almost algorithmic. Another example I look at is Frei Otto’s work, and in his case, a search for a kind of ethical, democratic architecture that is very related to nature. But the argument I make is that it’s also the result of efficiency and austerity because of this constant search for a minimal structure. I go deeply into both Ungers and Otto because they’re really also the most influential architects of the ’70s in West Germany. They both worked on the cusp of computation, one could say. I argue that the more they follow this rationalism or an idea of a minimalism, an efficiency, rule-based design, the more it starts to become very irrational. That’s an argument that Adorno also makes—that capitalism is actually irrational in spite of its rationality. I equate that a little bit with postmodernism and its surrealist tendencies within late capitalism.

And there’s a second book?

I have a background in comparative literature and visual art. I did that before I went into architecture and I have a pretty strong foundation in theory in general and an interest in it. When I was teaching history surveys at Pratt, I was working quite a bit on the 1990s: How do we historicize the 90s? When I was trying to figure out how to talk to students about the influence of feminism in the 90s in architecture, I came across the writing of a woman named Jennifer Bloomer. It’s some of the most experimental, far-out theory writing that I have come across in architecture. It’s just incredible. She’ll begin an essay talking about how she wrote this while she was pregnant with her second daughter and she mixes in these incredibly personal things with very deep readings of, for example, James Joyce. She does a lot with literature, or aesthetic theories, or Deleuze. And she’s funny—just an incredible writer.

She was a really big star from the late 1980s to early 2000s in architectural theory, and then she got very sick. I discovered her work when I had a baby. I was breastfeeding while trying to teach theory lectures and I read this, and was like, “This is my person!” She didn’t think you had to disconnect these things: As a woman, you can be in your body and be a mother and also be an intellectual. You don’t have to separate these things in your work.

I became obsessed with her work and decided I wanted to edit a book of her writing. I was like, “How am I going to do this? I just had a baby and I’m pregnant with another one.” I thought about it for a few years and then I felt like I was ready. It was a bit difficult to track her down, but I found her and she’s so sweet, so wonderful, and she’s so excited about it. We’ve been working on this for six or eight months. Her work is so relevant now, especially for young women and queer students who are really interested in the issues she talks about. We have to put this stuff out.

What was your work like with the journal Log, and how did writing for that type of publication influence the way you thought about your work?

I was the managing editor there and I really loved being an editor. One of the things I really liked about it was not just bringing together different pieces around a theme—the curating process—but I really loved being in touch with all of these incredible people. The collaborative aspect of it. That’s something that I really want to get into again—collaboration. I co-taught most of my courses at Pratt when I was there. This sense of creating a conversation among very different people was really wonderful. And in terms of writing, Log is not really an academic publication. There are a lot of academic people writing for it, but it’s not a peer-reviewed journal, and I do like that area, where it’s accessible to more people.

What are you most excited to do at Penn?

It’s one of the first chances I’ve had to develop new courses, because my teaching at Pratt was mostly in history surveys. But I’m also really excited about collaborations, and potentially working between departments. I haven’t met these people yet because I’m still so new, but I’m interested in the German department, art history, and other departments. That’s one of the things that’s great about a university as opposed to an art institute—the potential for interdisciplinary work. We’re also continuing to update the curriculum in the history and theory of architecture to make it more diverse, more international, more non-western. That’s really important and the process is interesting.