At the Intersection of Architecture, Art, and Biology 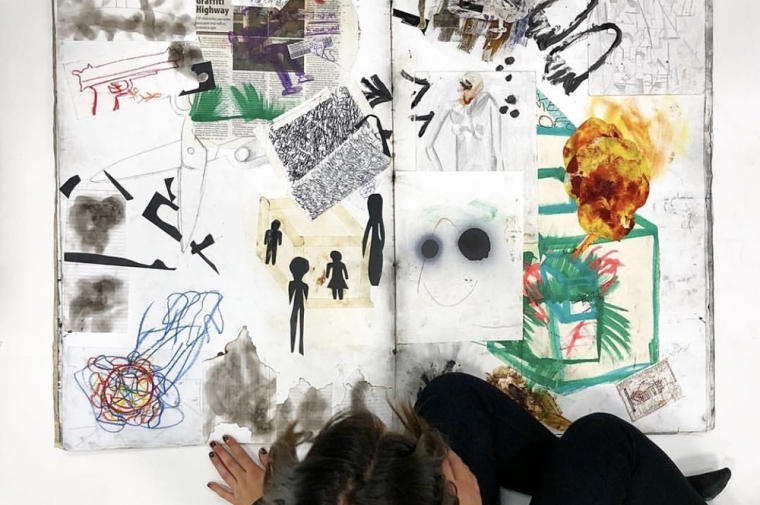 As a student in the undergraduate fine arts studio Drawing Investigations, each day Ana Beatriz Valente Soares would create a different, mixed-media composition in her notebook. One of her recurring interests was geometry—something she also explored in her study of architecture.

“I love bringing geometric analysis into art,” Valente says, adding that she also loves meshing the “abstractness of art into architecture.”

Valente is both an architecture and fine arts student in the School of Arts and Sciences who expects to graduate with her bachelor’s this May. Hers is not a common double major, so she has worked hard to create a path for herself that checks all the boxes of her unique interests.

This past January, Valente had her creative “Daily Drawings” highlighted in the exhibition Crosscurrents at the Pennsylvania Academy of the Fine Arts. The juried show is devoted to bringing together work by undergraduates from peer institutions across the country. In its third year, this is the first that Penn students’ work was chosen for display.

“I was so excited,” Valente says. “It was the first exhibition outside of Penn that I’ve been recognized in. It meant so much to me.”

Originally from Rio de Janeiro, Valente came to the U.S. for college, and is hoping to stay in the states after graduation. She’s already held internships in a design and architecture firm, Cactus, and a creative arts enterprise Kreëmart.

“Both of my summer internships were very different, but it was great for me to really understand both fields,” she says. “I feel like I was able to use both my majors a lot in them, which I felt was very valuable for me.”

Thanks to a course she took with Orkan Telhan, an associate professor of fine arts at the University of Pennsylvania Stuart Weitzman School of Design, Valente has also gravitated to biodesign, an emerging field in which Telhan is a leading figure, and is interested in finding work that allows her to innovate.

Valente first got a real taste of the potential of biodesign the summer after her sophomore year. Taking courses offered through Penn’s Integrated Product Design program—a collaboration between the School of Design, Wharton, and Engineering—Valente participated in the Biodesign Summit at the MOMA in New York City.

She and her partner worked for months to design an “introspective pen” called Perspect that uses electro-dermal sensing to provide insight into the user’s mental well-being. When in use, it might indicate, for instance, to a person with bipolar disorder that they are in danger of transitioning into a manic or depressive stage.

“The pen would sense a person’s sweat,” Valente explains, “and the color of the ink that came out would change accordingly.”

Designing objects and experiences that don’t fit neatly into traditional product categories, Valente says, is a good example of how she aims to bridge art and architecture.

“Doing both majors is empowering because I feel that now I can create anything I can envision,” she says.

For now, Valente is focused on finishing her studies. Enrolled in six credits the last semester of her senior year, she finds the workload challenging but worth it.

It’s especially meaningful—and helpful—to her, Valente says, to have teachers she’s close with in both departments “due to their small nature.” Also, she says, “the classes are really like a community. The students are still competitive, but we all want to see each other win.”

Story At the Intersection of Architecture, Art, and Biology March 7, 2019
Close
Close