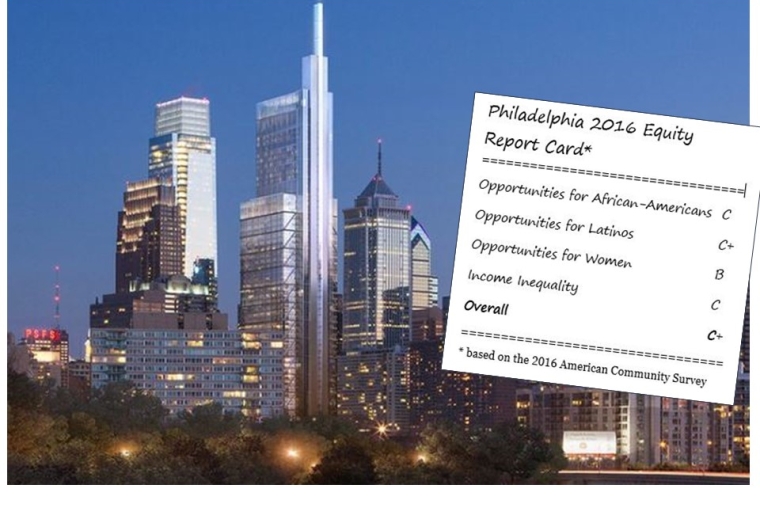 Philadelphia as seen in the 2016 Metropolitan Equity Report Card 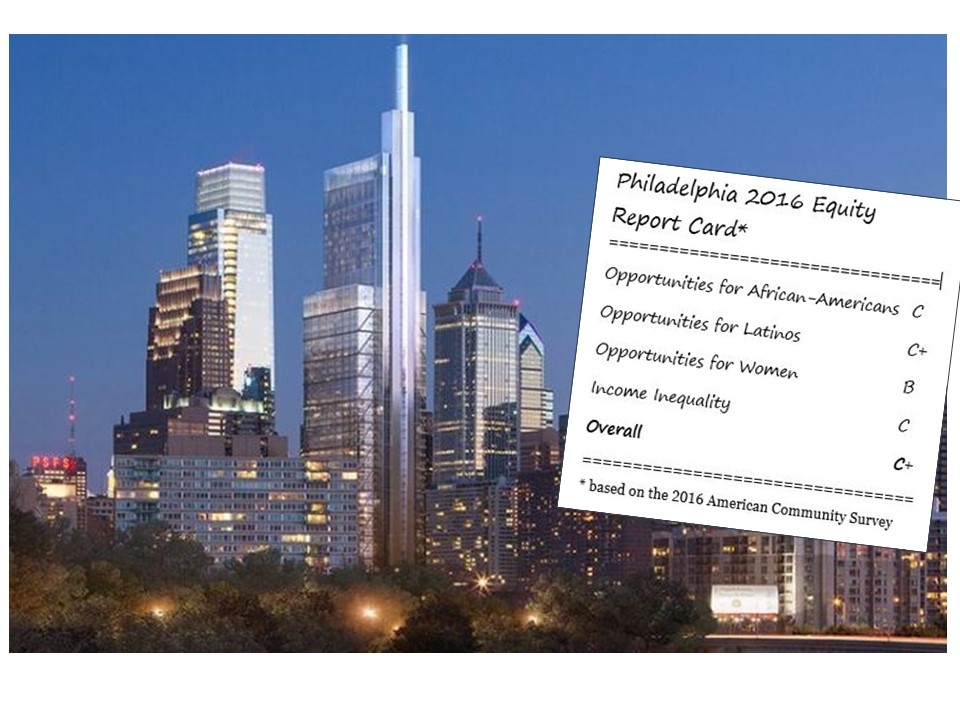 Philadelphia as seen in the 2016 Metropolitan Equity Report Card

As part of a new initiative from the Department of City and Regional Planning, the University of Pennsylvania Stuart Weitzman School of Design is launching a new series of working papers by faculty members and students who are working on issues related to equity.

“People talk about equity all the time as if it’s just one thing,” notes Professor and Chair of City and regional Planning Lisa Servon, “but in reality, inequality varies as much by place as by group. City planners are in a unique position to look at these place-based differences, and how thoughtful interventions can help narrow them.”

Entitled “2016 Metropolitan Equity Report Card,” the first paper looks at how African-Americans, Latinos, and women fare when compared to Whites and men in each of the nation’s 374 metropolitan areas on ten equity and opportunity categories, including residential segregation, poverty, household income, homeownership, unemployment, educational attainment, residential over-crowding, job mobility, and transit dependency. Among places with more than one million people, the metropolitan areas that garnered the highest overall grades for African-Americans in 2016 included Riverside-San Bernardino in California, San Antonio, Tucson, Jacksonville, and Las Vegas. Jacksonville and Riverside-San Bernardino also topped the equity opportunity list for Latinos, along with Norfolk, New Orleans, and Pittsburgh. For women, Sacramento, Providence, Las Vegas, Minneapolis, and Tampa-St. Petersburg offered the best mix of opportunities. Similar rankings are presented for medium-sized and smaller metropolitan areas, as well as for the most-improved metro areas since 2005.

The second paper in the series is entitled “Does Residential Segregation Exacerbate Metropolitan Level Poverty and Excessive Housing Cost Burdens?” It finds that when measured at the metropolitan level, Black-White residential segregation continues a decline begun in the late 1980s, while Hispanic segregation is the rise. Population growth mostly works to reduce racial segregation but the effect varies by metro area.  Higher levels of segregation are associated with higher rates of poverty among African-Americans but not Hispanics. Lastly segregation functions to reduce individual opportunities, it does not seem to be associated with rising homeowner or renter cost burdens.

The final paper, which is entitled, “Improving the Spatial Equity of the Low-Income Housing Tax Credit Program,” picks up on the U.S Supreme Court’s 2015 landmark decision in Texas Dept. of Housing and Community Affairs v. Inclusive Communities Project, Inc., which found that, whatever their intent, federal housing programs which generate disparate racial impacts violate the U.S. Fair Housing Act. Using data on the more than 35,000 Low-income Housing Tax Credit (LIHTC) projects built since 1988, the paper explores the degree to which such projects are disproportionately located in minority and poor neighborhoods; and how with a few simple changes, the LIHTC program could be used to further economic and social opportunities rather than reduce them.

All three papers are authored by John D. Landis, professor of city and regional planning. Additional working papers looking at transportation equity, differences in rural and urban inequality, and spatial sorting by poverty and income are planned for publication in May of 2019.

Inequality constitutes one of the world’s most compelling challenges, and the PennPlanning Equity Initiative (PPEI) seeks to identify proven and fair solutions that are scalable and applicable across national, urban, and local boundaries. PPEI includes three related efforts, including stimulating public discussion through dialogue, building local capacity by identifying approaches that work, and undertaking action-oriented policy research.  To find out more about the PennPlanning Equity Initiative, contact Professor Lisa Servon, Chair of the Department of City and Regional Planning at the University of Pennsylvania at servon@upenn.edu.

The PennPlanning Equity Initiative Working Papers have not been reviewed. Please contact the author with questions and comments.