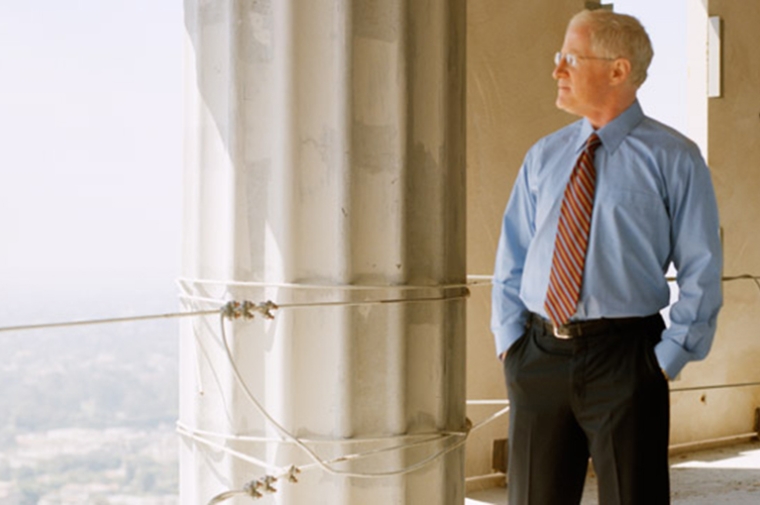 Leading by Design explores the work of PennDesign alumni, faculty members, and supporters of the School who are expanding the practice of art and design to meet the challenges of the 21st century.

In November, PennDesign received a $1.25 million gift from Witte and his wife, Keiko Sakamoto, Esq., to establish an annual prize for an outstanding planning student, which carries a $50,000 fellowship, along with a professional award for innovation and impact in planning. The winning plan will be announced later this month. Here, Witte talks about how the planning discipline has changed during his career and what he hopes the prize will achieve. The conversation has been edited.

What brought you to Penn and what stayed with you?

I had an early fascination with cities, and only applied to colleges in cities. For me, it was either Penn or Cornell. While I was here, an urban studies major sort of took root. I ended up being in the first class to graduate with a major in urban studies. And then from that, through a professor who I’ve stayed friendly with over the years, Norm Glickman, I heard about city planning and ended up going straight into the master’s program.

That nurtured my interest. My interest is partly just my own skill set, which was as much from the housing, and policy, and neighborhood revitalization side, as it was from the planning, design, and land-use side. In my current role, I deal with all of those things. I feel very grateful that I’ve been able to remain true to my early interest in cities, right on through every job I’ve ever had and can look back with some satisfaction that we’ve been able to accomplish a fair amount. Now, I’m interested in spreading that to other students who may be similarly interested.

What advice do you have for somebody coming out with a planning degree?

Regardless of what you do with your planning degree, you set yourself up best if you have a multi-disciplinary experience. Sure, have a concentration, whether it-s historic preservation, or affordable housing, or whatever it may be, but whether you like it or not, take a course in real estate finance. Take a course in urban design. Be able to communicate in all these disciplines. And learn to be a good communicator. Just because you’re a whiz on the computer, or you have a sixth sense of design, you won't be that effective unless you’re a good communicator.

What do you see as the lesser traveled avenues in planning? Have you come across opportunities that you couldn’t realize, or that don’t fit for Related, but just that seem like they’re waiting to be realized?

Well, when you think of city planning, you think of city planning departments, and you think of land-use approvals, and site plans, and urban design, and buildings. And of course, that is central to it. But today, much like urban studies, there’s education, healthcare—all of those aspects that have to be planned for in neighborhoods and cities. One of the things we’ve done at Related is redeveloped old public housing sites—mostly, hopefully, for the residents that live there and to make them more holistic communities. You can’t do that successfully without thinking about the non-bricks-and-mortar side of things. That’s not something I was trained in. Maybe it came to me later in the career through some of these development experiences, but there are people doing some really interesting things in these areas now. It’s too early to tell how successful, but given the income inequality today, we all better be thinking about it.

It’s incumbent on us who work in the cities, and frankly maybe as much or more in the private sector than in the government sector, to make sure that not only we have responsible and good development, but that it’s holistic.

What are the thorniest issues for a planner today, whether they’re in the public or private sector? Is it affordable housing, income inequality?

It really depends. If you’re a planner in Detroit, the biggest challenges for you are very different from if you’re a planner in San Francisco. In Detroit, it might be, how do we allocate scarce resources for public services in parts of the city that have been hollowed out? In San Francisco, it’s how do we manage explosive growth and somehow make this more of a mixed-income city?

And there are things that affect everyone, like the fact that job creation tends to be on the low end or the high end and not in the middle. What role can planners play in creating places that can attract the type of jobs that can benefit a lot of the existing citizenry?

There’s been a lot of discussion about the growth in cities, both in the profession and across our School. Do you think the fact that more people are living in cities is good news for quality of life and the future of humanity, or do you think that that actually just makes existing problems bigger?

I think internationally, in China, in Africa, places like that where there was a huge emptying out of rural areas into cities where they have not planned for it, and they’re ill-equipped to deal with it, I think that can be problematic. Look, if I didn't think that the glass was half full, I’d go out of business tomorrow. I do think we believe at the highest levels of the Related companies, that people are going to continue to want to live in cities, maybe even at a greater rate, because this generation is maybe a little bit different.

It’s incumbent on us who work in the cities, and frankly maybe as much or more in the private sector than in the government sector, to make sure that not only we have responsible and good development, but that it’s holistic, that we deal with all these other things.

The federal government has taken a smaller role in planning. In many cases, that leaves a lot for municipalities and maybe even states. Same question as before, is the glass half-full or half-empty?

Well, in the early days of planning in urban development, urban renewal was urban renewal directors dealing directly with Washington. I don’t think that's a good thing. It’s just too big and diverse a country. Less involvement of the federal government at this local level or planning level, I think, is frankly a good thing. The lack of funding where it could be helpful, particularly in major infrastructure projects, is not a good thing. I think they really should have a role to play there. They don’t at the moment.

You’re right, it’s incumbent on state and local governments to try to figure it out on their own. Some have done it better than others. Affordable housing being a crisis situation in a lot of California, a number of counties have passed general obligation bonds in the hundreds of millions of dollars to support affordable housing. Those require a two-thirds vote of the electorate in California because they're considered a tax, and they got them. There are encouraging signs.

We really need more regional planning. A great inhibitor to everything from affordable housing to transit planning, to other things in California, is the fact that there’s so many levels of so many small governments. Each have their own planning commission, each have their own city council, and it’s very difficult to do what really needs to be done at the regional level.

We’re going to have to stop fighting with each other. It is certainly not helpful to the things I’ve been talking about, about community development, regional planning. We’ll never get anything of consequence done until that stops. New York and Albany have to stop fighting. Harrisburg and Philadelphia have to stop fighting. I mean, everybody has to view this is a common goal. I know it’s hard, but right now that's a particular obstacle, even though there is more sophistication, more good ideas, and technology has advanced things greatly. Now, it’s on us to make it happen.

With respect to the Prize, what was appealing to you about funding a student? Are there certain dimensions of a student’s work or portfolio that you think would be important to encourage?

Well, architecture is the bigger program and understandably gets more attention, but I felt city planning warranted attention, especially for an urban university in the middle of Philadelphia.

And it’s about encouraging students to think outside the box, to think big, to think in a multi-disciplinary way, to make a difference in a community. I know those sound like just buzzwords, but it’s easy, as a graduate student, to just get tied up in the coursework and thinking about where the job is going to come from. If somebody at an early stage shows evidence of those traits, I’d like to encourage more of that.