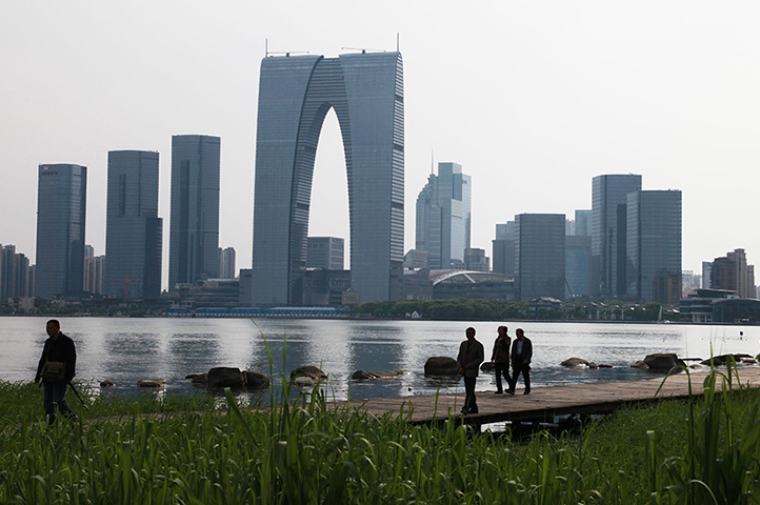 During the entire 20th century, the United States poured 4.5 gigatons of concrete into its buildings, highways, and cities as it transformed itself into an economic superpower. China poured 6.6 gigatons in just three years, from 2011 and 2013. The pace of urbanization has meant the seemingly-overnight transformation of China’s built environment and the creation of hundreds of new towns and urban conglomerations in the last few decades.

Last month, as part of the Penn in China Faculty Speaker Series, Associate Professor of City and Regional Planning Zhongjie Lin shared highlights from his research on urbanization in China. The panel, called “The Past, Present, and Future of Chinese New Cities,” was presented by Penn Global, Penn Alumni Relations, and the Penn Wharton China Center. Lin was joined on the virtual panel by Wu Jiang, senior vice president of Tongji University in Shanghai, and Liu Jiang, vice dean of the School of Architecture at Tsinghua University in Beijing. The panel, moderated by Weitzman Dean Fritz Steiner, was focused on a few questions. In Lin’s words: “Where do the new towns originate? Where do they currently stand? And what are the challenges they face?”

Lin earned a Master of Architecture from Tongji University in Shanghai before completing his Ph.D. at Penn, and during his time there, he was able to witness some of the development of the iconic Pudong district near Shanghai’s old urban core. His research investigates the gap between the popular images of China’s new cities and the complicated facts of their development.

“The plans of new cities have always been largely pristine and featureless, yet the process and reality are always messier,” Lin said. “This contradiction is common in large-scale interventions across the world, but in China there are some particular characteristics. It is manifest in the destruction of old communities, forced relocation of residents, and exclusion of migrant workers, at the same time as many beautiful, middle-class enclaves are built.”

In 1980, Lin said, 20 percent of China’s population lived in cities, while in 2020, more than 60 percent of the country had moved to urban areas, beating previous projections by 10 years. Fourteen million Chinese citizens move from villages to cities each year. The development of new cities was catalyzed by a series of policy reforms in the early 1990s, including releasing urban land into capital markets and realigning regional planning partnerships. By some measures, Lin said, China’s primary economic output in the last 20 years has been cities themselves. The trend has huge implications for the environment — China currently consumes more than 40% of concrete and steel produced globally — but has also generated new social energy in China’s urban populations, Lin said.

Lin’s presentation was focused on the Suzhou Industrial Park, a new, planned development emblematic of China’s new-city dynamic. The Suzhou Industrial Park was developed with a priority focus on urban design, emphasizing planning and landscape development first. The area is economically successful, with large GDP growth driven by urbanization, and represents meaningful experiments in urban planning and governance. This model new town nevertheless is still characterized by auto-centric urban space, superblock layout, social disparities, and compromise of local culture. The area’s success also raises more questions about the future of Chinese new towns, Lin said. What if new cities stop growing? How will urban regeneration play out as the new cities age? Will China’s Ministry of Natural Resources, created in 2018, redirect the pattern of urban growth?

The rate of urbanization and the accompanying development of new towns is unbalanced in China, concentrated on the east coast, said Wu. Shanghai has between 12 and 13 million people living in the central urban environment, but more than 24 million living in the whole city. It could be better understood as a group of cities, incorporating long-established areas and new developments. “We cannot imagine in one city you’d have more than 24 million people, so very naturally we develop more and more new settlements around the city,” he said.

These developments pose environmental and transportation challenges, and they also raise questions about planning and design regarding the tension between designing new cities as icons of growth or places for “real life,” Wu said.

Prior to the current era of new-town development, said Liu, satellite towns were built during the middle of the 20th century primarily to serve factories and industrial hubs — places for workers to live. But as China began to undergo economic reforms, developing new cities became an engine of economic growth rather than simply an accommodation for industrialization.

“The policy of new town development in China is firstly a political instrument to promote economic development,” Liu said. “It’s a part of the urban policy to deal with the accelerating process of urbanization. And … it creates a kind of new urbanism to accommodate new industries, new urban functions, and new citizens, because these citizens are immigrants from the countryside to cities.”

The panel was presented as part of “Spatial Visions Connecting China and the West: A Centennial Review and New Perspectives on Future Urban Environments,” a three-year research project led by Lin, along with 8 other Penn researchers and several collaborators from Tongji, Tsinghua, Southeast University, and Chinese University in Hong Kong.