The E. Lewis Dales Traveling Fellowships are awarded each year to select students of the second-year class in the Master of Architecture program for travel abroad in the summer before their final year of study. Students are selected for the Fellowship through an anonymous portfolio competition judged during the first week of the spring semester by a committee comprised of standing and core studio faculty. The Dales Fellowship enables the Department to encourage students to begin the documentation and presentation of their work, a process that is integral to the development of a design ethic and to interviewing for a job.

The Weitzman Architecture Faculty Jury (see list below) evaluated 60 anonymous portfolio submissions.  They were asked to score each portfolio and submit short statements on what they valued while assessing each portfolio. The 2022 Dales Fellowships will be awarded to the highest scoring submissions.

I was looking for work with a strong attitude - a clear design intent conveyed through rigorous and aesthetically powerful representations. Work that questions and explores new forms of habitation, materiality, representational conventions and is not afraid to take a position. Work that is multi-layered and multi-scalar, operating across the conceptual, technical, and aesthetic spectrums with the same level of intensity. This is what the top submissions had in common.

Excellent original work. Consistent challenge to cultural norms which are addressed in work. Rare and unique.

Really appreciated the intensity of ideas and graphic expression.

Compelling combination of both speculative and realized works

In each submission I looked for a connection between the travel proposal and the work being presented. Is this an area the student has explored in their work, is it an area where the student feels that they have a deficit and they want to add to their understanding or toolkit, etc.?

The work was evaluated based on the presence of consistently high output from project to project, the presence of a point of view, the ability to use imagery and diagrams to tell their story, and the overall quality of their logic/argument/findings.

I look for high resolution in both the conceptual and practical sense. Does the portfolio contain ideas that are conceptually developed to a high level?  Do those ideas question convention and push our understanding of architecture forward?

Given the range of projects shown in the portfolios, I was drawn to the narrative aspects of the work as well as the graphic clarity and composition. Furthermore, portfolios that demonstrated a point of view about architecture and society were particularly compelling.

In general, I awarded and appreciated those portfolios that were obviously formatted with attention toward this competition: those that forefront the work at UPenn for the last three semesters as one coherent designed presentation by an individual designer with a strong “voice” expressed through a compelling graphic argument.

Compelling intensity of expression for each project.

Convincing proposals with a lot of character.

On the practical side, are the buildings resolved and are the drawings well-detailed? Is the enclosure considered and complete? 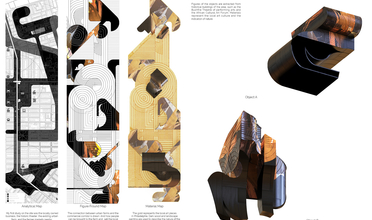 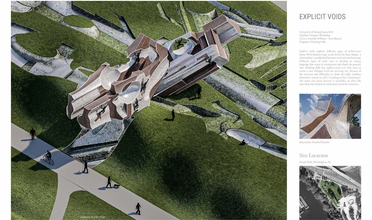 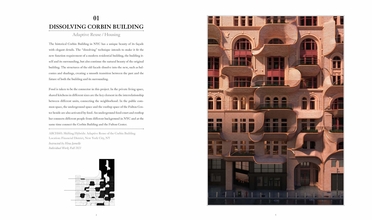 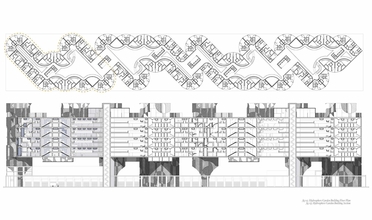 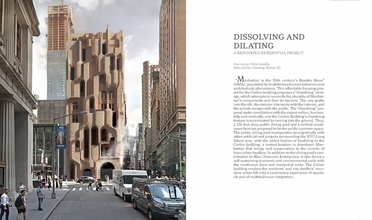 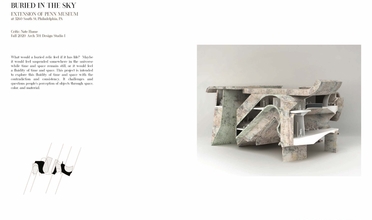 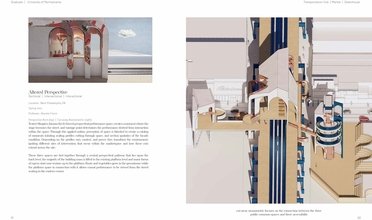 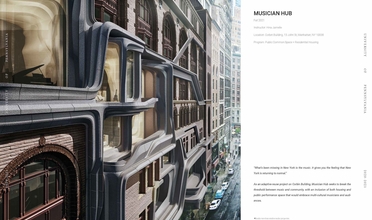 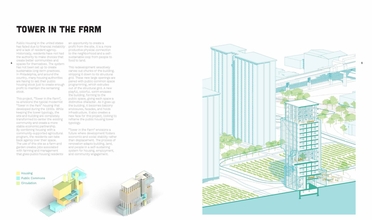 Collective Forms and Interpretations of "Public" 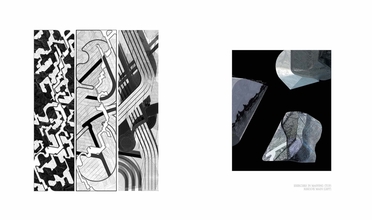 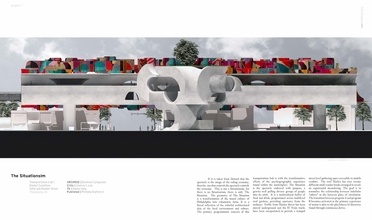 Architecture at the age of uncertainty 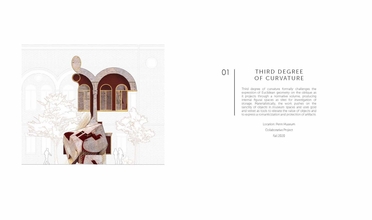 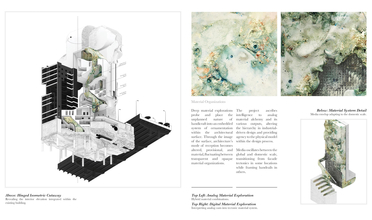 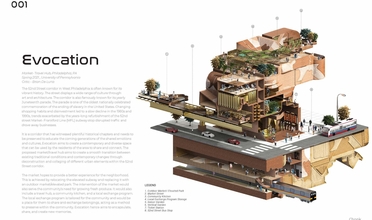 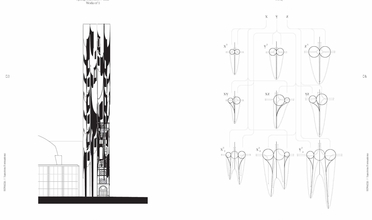 The Stuart Weitzman School of Design at the University of Pennsylvania has received a new gift from Aedas, a global architecture and design firm headquartered in Beijing, to establish a fellowship for students who are interested in working in Asia.

The gift, which was spearheaded by alumnus Andy Wen, GAr’90, Global Design Principal for Aedas, is the first fellowship at the Weitzman School sponsored by a firm from Asia. In addition to support for educational costs, the selected fellows will be offered a summer internship at Aedas to gain practical experience on top of their academic preparation.

T-Square Club Fellowship
Established in 1984 and awarded annually for excellence in design to a student who has just completed the first year. Among the patrons and members of the T-Square Atelier were Penn professors Paul Philippe Cret, Walter P. Laird, John Harbeson, Jean Hebrand, and Norman Rice.
Winner: Marjorie Wong

Mario J. Romanach Fellowship
Established in 1984 in memory of one of Penn’s most beloved teachers, the fellowship is awarded to a student entering the final year in the professional degree program, for demonstrated excellence in design, a love for architecture, and the determination to develop as an architect. Mario J. Romanach served as Professor of Architecture from 1962 until his death in March 1984. He was Chairman of the Department of Architecture from 1971 to 1974.
Winner: Kyle Troyer

The Atkin Fellowship
The Fellowship shall support a deserving graduate student enrolled in the student’s last year of studies.  The fellowship shall be used to support the idea of “place” in architecture, including the history, culture and existing conditions of a site in the development of a project, and in consideration of the community that shall use the building or site, in opposition to an imposed solution.  The fellowship shall be awarded based on the ideas in Professor Vittorio Gregotti’s article, “On Modification,” in his book, Inside Architecture.
Winners: Harsana Siva & Emily Shaw

Paul Philippe Cret Medal
Founded by the Architectural Alumni Society in 1946, the prize is awarded to the graduating student who has consistently demonstrated excellence in design.
Winner: Miguel Matos

Alpha Rho Chi Medal
In 1931, the Grand Council of Alpha Rho Chi established the Alpha Rho Chi Medal to "encourage professional leadership by rewarding student accomplishment." The Fraternity provides the medal to selected schools of architecture throughout the country to be awarded to the graduating senior who has shown an affinity for leadership, performed willing service for the school or department, and gives promise of real professional merit through his or her attitude and personality. The members of Alpha Rho Chi firmly believe strong leaders are just as essential as strong designers to the architectural professions. It is vital to our efforts to produce individuals committed to public service, as well as individuals committed to maintaining Architecture and the Allied Arts as noble professions. We also assert that high scholastic achievement is not necessarily an accurate measure of leadership or service. The Alpha Rho Chi Medal commends those students who show true professional merit beyond the design studio and their academic career.
Winner: Bingyu Guo

Frank Miles Day
Awarded to the architecture student submitting the best essay in courses in the history and theory of architecture.
Awarded to: Quoc-kha Kelvin Vu

Harry E. Parker Prize
This prize is awarded to the student who has an outstanding record in architectural construction.
Awarded to: Emma Mcmonigal

Charles Merrick Gay Scholarship
Awarded to the student who has shown outstanding ability in architectural construction and a realization of its relationship to design.
Awarded to: Quoc-kha Kelvin Vu

Harlan Coornvelt Memorial Prize
Awarded to the student who achieved the most outstanding record in required architectural structure courses.
Awarded to: Muqiao Lei

AAD Prize in Design Excellence:
This prize is awarded annually to a student in the Advanced Architectural Degree program whose work is judged by the design faculty to be excellent, in consideration of the GPA and design portfolio.
Awarded to: Xiaotong Ni

Samuel K. Schneidman Fellowship
Awarded to the student with expressed need and demonstrated excellence in second or third year.
Awarded to: Emma Mcmonigal

James Smyth Warner Memorial Prize
This prize is awarded to the second-year student with the highest record in required studio courses. Established in 1938 by Professor George Walter Dawson for a student in Architecture. The prize should be used for expenses for a trip to see and study American architecture.
Winner: Rhea Nayar