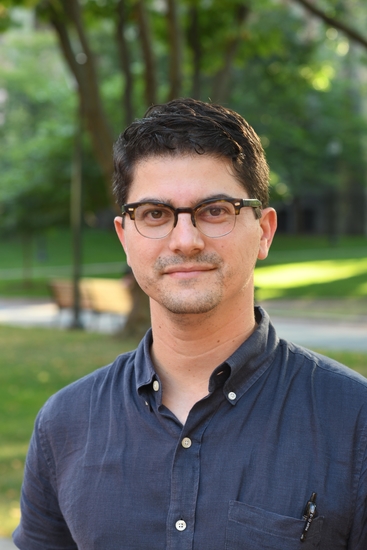 Paul M. Farber, PhD is a curator, historian, and educator from Philadelphia. He is Artistic Director and Co-Founder of Monument Lab and Senior Research Scholar at the Center for Public Art and Space at the University of Pennsylvania Stuart Weitzman School of Design.

Farber's research and curatorial projects explore transnational urban history, cultural memory, and creative approaches to civic engagement. He is the author of A Wall of Our Own: An American History of the Berlin Wall (University of North Carolina Press, 2020) which tells the untold story of a group of American artists and writers (Leonard Freed, Angela Davis, Shinkichi Tajiri, and Audre Lorde) who found refuge along the Berlin Wall and in Cold War Germany in order to confront political divisions back home in the United States. He is also the co-editor with Ken Lum of Monument Lab: Creative Speculations for Philadelphia (Temple University Press, 2019), a public art and history handbook and catalogue designed to generate new critical ways of thinking about and building monuments. Additionally, Farber has edited a new critical edition of photographer Leonard Freed’s Made in Germany (Steidl Verlag, 2013), co-edited a special issue of the journal Criticism on HBO's series, The Wire (Wayne State University Press, 2011), and contributed essays and advised the production of visual culture books including Leonard Freed's This Is the Day: The March on Washington (Getty Publications, 2013), Nathan Benn's Kodachrome Memory: American Pictures 1972-1990 (powerHouse, 2013), and Jamel Shabazz's Pieces of a Man (ArtVoices, 2016).

As a curator, Farber works with artists and their families in order to together engage, revisit, and re-imagine their archives. In doing so, he also brings multi-generational students into the fields of public art and history. In addition to curating Monument Lab’s City Hall exhibition (2015) and citywide exhibition (2017), he is a co-curator with Salamishah Tillet of Monument Lab’s A Call to Peace exhibition in Newark (2019). With Monument Lab, he directs research residencies with the High Line and Pulitzer Arts Foundation, convenes a national fellows program, and hosts its podcast featuring artists, scholars, activists, and designers shaping the next generation of public art. He has led projects with funding from the Pew Center for Art & Heritage, Elizabeth Firestone Graham Foundation, Kickstarter, the Knight Foundation Art and Technology Prototype Fund, the National Endowment of the Arts, the Surdna Foundation, the Tuttleman Family Foundation, and the William Penn Foundation.

In addition to his work with Monument Lab, Farber is a curator of Making Home Movies (2019), the traveling exhibition The Wall in Our Heads: American Artists and the Berlin Wall  (2014–Present) and Stephanie Syjuco: American Rubble (2014). He has been invited to lecture and lead workshops at the Library of Congress, New York Public Library, the Philadelphia Museum of Art, and the Barnes Foundation, as well as Brown University, Duke University, Georgetown University, and Stanford University. He served as the inaugural Scholar in Residence for Mural Arts Philadelphia. His work on culture has also previously appeared in The Guardian, Museums & Social Issues, Diplomatic History, Art & the Public Sphere, Vibe, and on NPR.  He was included on Dell's inaugural #Inspire 100 list, a group of "world changers" who use technology to empower social change.