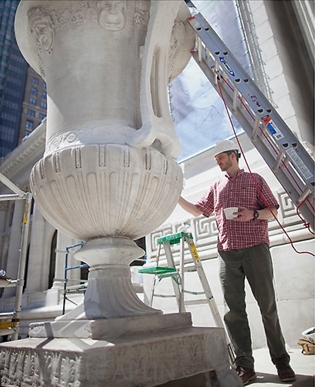 Since 1995, Andrew Fearon has worked in the field of conservation encompassing architecture, decorative arts, and archaeological materials. In 2006 he joined the Philadelphia based firm Materials Conservation where he currently serves as Chief Architectural Conservator specializing in wood, architectural finishes, and masonry. Among his completed projects are the exterior finishes of Jefferson’s Monticello, The Rodin Museum Interior Finishes, and Louis Kahn’s Esherick House. Since 2010 he has served as lecturer in wood conservation as part of the University of Pennsylvania Graduate Program in Historic Preservation. He holds a Master of Science degree in Historic Preservation (MSHP'06) from the University of Pennsylvania and has completed the ICCROM Wood Course in Oslo, Norway. Andrew currently serves as board member for APT's Delaware Valley Chapter and Docomomo's Philadelphia Chapter. He is also Vice-President, Director of Advocacy for ICOMOS' Scientific Committee for Wood and is the Chair of The American Institutes for Conservation Architecture Specialty Group (2017).

“With the Help of Nature: Kahn, The Wood House and the Culture of Stewardship”, Docomomo Journal 58, 2018

“A Lot Harder Than It Looks: Conservation of a Worst Case Scenario”, ACUA Underwater Archaeology Proceedings, 2017

American Institute for Conservation of Historic and Artistic Works, Annual Meeting, 'Usonian Frank Lloyd Wright: An Evaluation of Coating Products and Surface Treatments for the Exterior Wood of the Pope-Leighey House.' 2012 (anticipated post-script 2013)

'Copal resin and the practice of oil varnishing in the second half of 19th-century America.' Architectural Finishes in the Built Environment, London: Archetype Publications, 2009