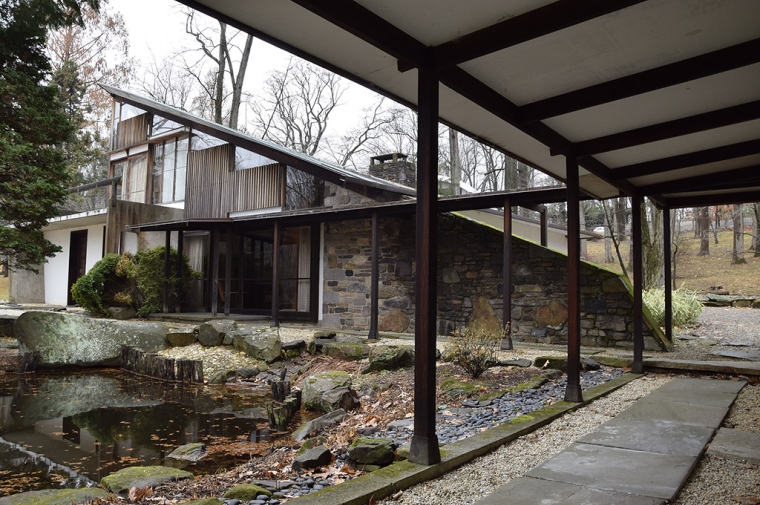 Since 1992, Holly Boyer-Manders has been an architect in New Jersey. She’s worked on dozens of historically designated projects, including two national historic landmarks, and she’s worked on several award-winning preservation projects. She was also instrumental in preventing the demolition of the historic Landis Theater in Vineland, New Jersey.

Even with all of her experience in the field, Boyer-Manders still felt something was missing: A master’s degree focused on historic preservation, providing her a foundation of expertise she knows she’d thrive on. But, she wasn’t sure how to make it work.

“To take two years off from work for school, it kind of made it something that I didn’t even think about,” she says. “But when I heard about this one-year program, I thought, ‘Well, that’s actually within reach.’”

She gave it a go, and now, one year later, Boyer-Manders is gearing up for a summer capstone project.

Even though the fast-paced program has been challenging, it’s been worth it, she says. “I am sad that the year is coming to a close.”

The new degree—officially a Master of Science in Design with a concentration in Historic Preservation (MSD-HP)—kicked off at the Weitzman School in the fall of 2018. Developed to meet the needs of practicing design professionals seeking post-professional training, specialization, or a career change, the one-year MSD-HP complements the two-year Master of Science in Historic Preservation, which serves students entering preservation from an allied field, such as history, art history, and archaeology, and those with undergraduate training in design or planning but little professional experience.

Boyer-Manders, part of the first cohort, enrolled in two semesters of full-time coursework, with about half of the courses required, and the rest electives.

She notes how different the experience has been compared to her undergraduate studies.

“It’s been really rewarding to step away from practice temporarily,” Boyer-Manders says. “It has given me a chance to take all the practical knowledge that I have about working and look at it academically. It gives you a chance to think about theory and the direction that the field is moving in.”

A three-week preservation design studio this summer, taught by Professor of Practice Pamela Hawkes, will immerse Boyer-Manders and her classmates in a visitor center project involving the George Nakashima House, Studio, and Workshop in New Hope, Pennsylvania.

“It’s a great way for all the students to work together and to incorporate everything they’ve learned,” says Hawkes. “Visitor centers are a wonderful paradigm for design in historic settings because they should not detract what is already significant about the site, but still should have their own interest and integrity. This project will give the students a chance to express their ideas, finding the right balance for this place, and providing guidelines for how the site will evolve in the future.”

Students entering the MSD-HP program must possess a professional degree in design or planning fields, including architecture, landscape architecture, interior architecture, urban planning, urban design, or engineering, from an accredited university, and maintain at least four years of professional experience.

“For prospective [MSD-HP] students, who may be part of existing practices or have families and other commitments, one year is much more manageable,” says Hawkes. “The great benefit for the Historic Preservation Program is that these students share their experience and passions with students and faculty, and that has proven to be the case with this year’s class.”

And, notably, the students don’t have to have a background in historic preservation to apply to and enter the program, says Hawkes.

“It’s designed for people who have been out in the field for a couple years and discovered that they are spending a lot of their practice working on historic or existing buildings,” she says. “That is true for the majority of professionals, and the reality is that most architecture and planning programs don’t really deal with existing sites.”

The one-year degree also offers, says Hawkes, a chance for students to pursue a career change in a way that’s convenient. That’s one aspect in particular that drew Jyotsna Naga to the program.

Naga, a licensed architect and college professor in India, has her sights set on a Ph.D. program in the U.S. after she finishes her MSD-HP at Penn. She’s always been interested in learning about old buildings—how they have so much to offer, but are often given so little attention.

“In India, we have thousands of years of structures everywhere,” Naga says. “We don’t have the kind of system that encourages people to conserve these structures. I just feel that—not just from a sustainable standpoint, but also from a social, cultural, and economic standpoint— it’s important to resurrect these structures so that we have some remains of what our ancestors left behind.”

Also, in India, Naga says, utilizing historic sites is part of everyone’s daily life—so much that she believes people don’t often see a “universal value” in them.

“My aim is to bring forth a model where people are made aware and hence appreciate a site followed by wanting to preserve it rather than destroy it, for monetary benefits, in the long run,” she says. “To begin with, we need to safeguard what we have for posterity sake. I almost want to recite what the Indian Constitution iterates: ‘Of the People, For the People, By the People.’ This, to me, is what preservation is about.”

Penn is unique in offering one-year program, and, Hawkes says, it shows the University’s commitment to the field.

“By preserving buildings in place, we are able to also preserve communities in place,” she says. “Penn’s program is unique because it deals with all aspects of the built environment, from conserving materials and engineering to planning and social issues. Historic places are important to our spirit, and are essential to a sustainable future. We have still only seen the tip of the iceberg in terms of the impact that preservation can have on our communities.”