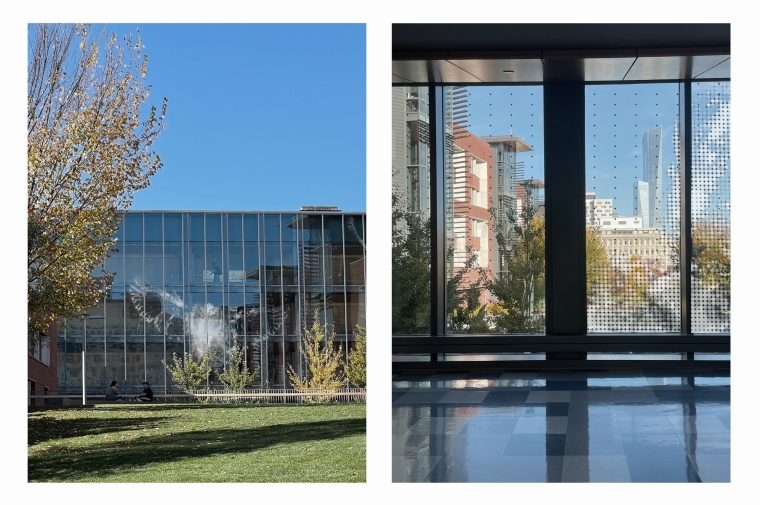 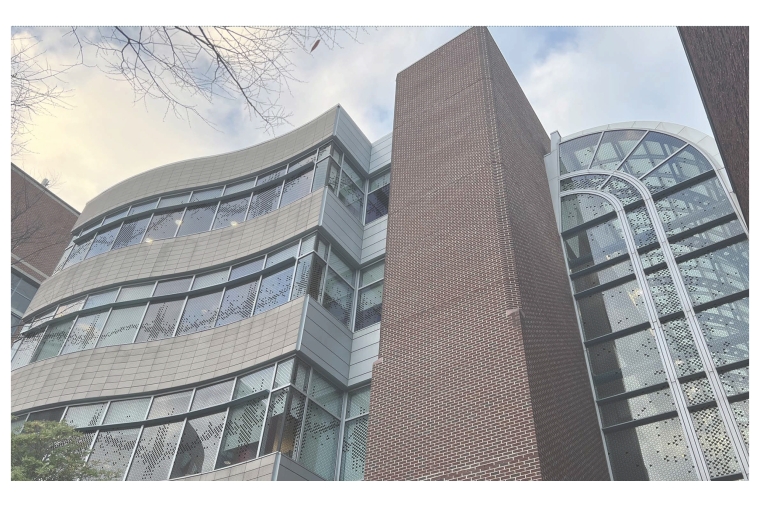 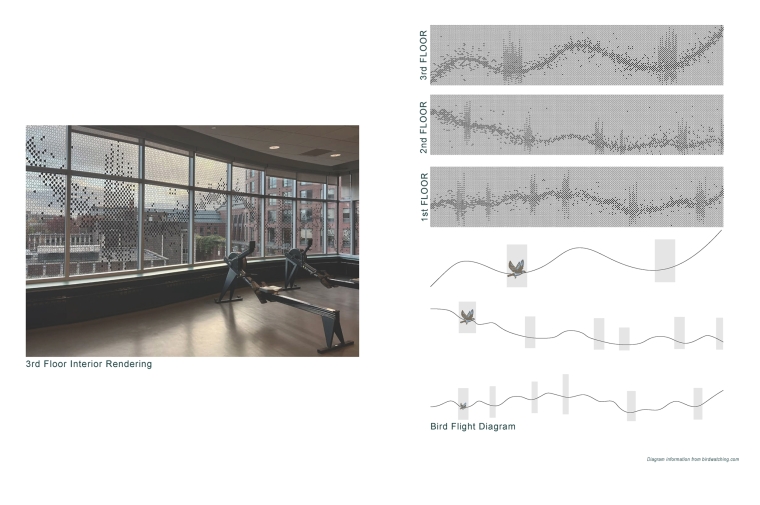 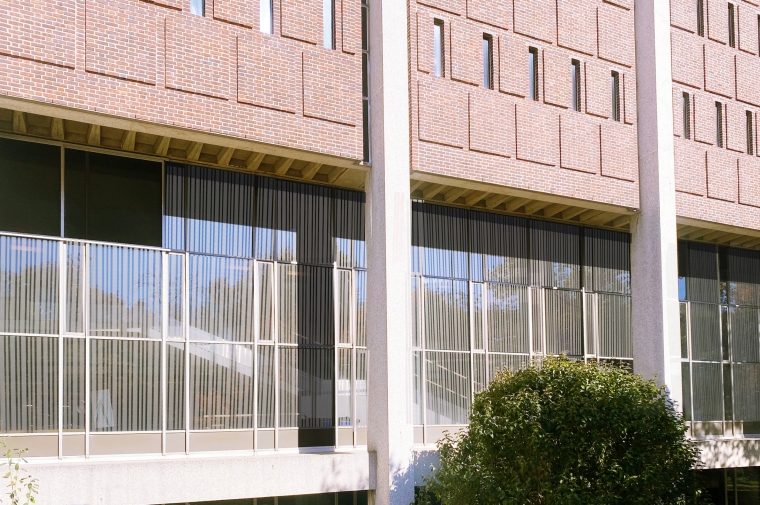 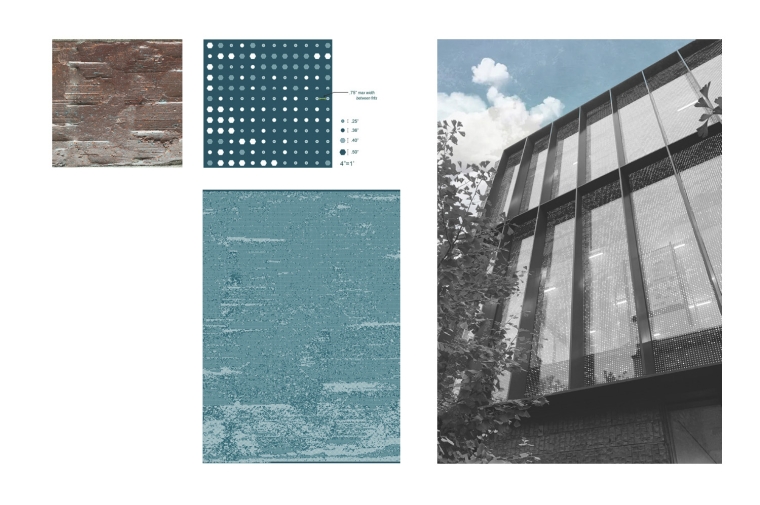 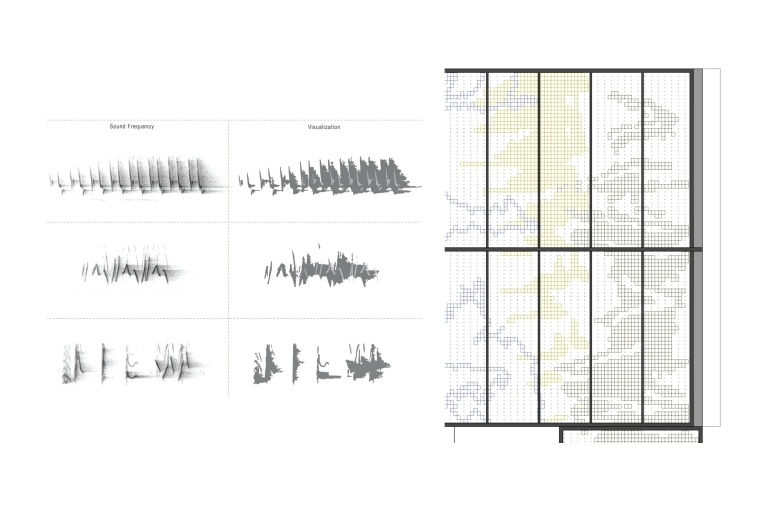 As part of a campus-wide initiative to make Penn more hospitable to birds, a Fall 2022 ideas competition asked Weitzman students to design exterior window film for select buildings in order to reduce fatal collisions (“bird strikes”), and five winners have been selected.

The first- and second-place winners will receive a cash award, and their designs will be posted on the Disrupt the Reflection website.

Philadelphia is located along the Atlantic Americas Flyway, which extends from the tip of South America to the Canadian Arctic. Food sources and nesting areas—from backyards to parks and street trees—support the many billions of migrating birds that make this route annually. The Penn campus also plays a vital role, providing seasonal or year-round habitat to some 80 species of birds, but it also presents the risk of collision with glass windows.

The Disrupt the Reflection competition was announced in September and open to all Weitzman students. The jury included Jeff Goldstein, FAIA, principal and cofounding partner at DIGSAU; Eva Lew, AIA, director of architecture and planning in Penn’s Office of the University Architect; Kate Orff, founding principal of SCAPE and director of the Urban Design Program and Center for Resilient Cities and Landscapes at Columbia University’s Graduate School of Architecture, Planning and Preservation; Keith Russell, program manager for urban conservation for Audubon Mid-Atlantic; and Lucinda Sanders, adjunct professor of landscape architecture and design partner and president and CEO of OLIN.

The competition was organized by Karen M’Closkey, associate professor of landscape architecture, in consultation with

The designs and their proposed sites are described by the designers below. To learn more, visit the Disrupt the Reflection website.

While we enjoy the cozy sunlight and beautiful views of nature from within a protected space made available by huge pieces of glass, we barely understand how much trouble this modern-age innovation has brought to the animals that share the environment with us. This project aims to promote awareness about the urgent issue of bird collisions on campus while serving the function of preventing birds from hitting the east-facing glass facade of the Lauder College House courtyard. Although this building is partially covered with bird-friendly film, the facade of the second floor and above is still a potential hazard due to its large spans of transparent surface, and the reflections of the sky and vegetation, particularly because the courtyard contains several trees surrounded by the glass façade. This student housing and cafeteria location is also densely populated with people and thus can serve as a great location for promoting awareness about bird strikes. This project uses the idea of the mark left by a bird hitting the window as a memorial for their death and a warning to humans, urging everyone who sees it to take action to prevent bird mortality from window collisions. Since the second story and above are the corridors of the student apartments, we avoid blocking the view from inside to the city and Woodland Walk by using the maximum distance grid with the standard of the 2x4 rule.

This window film design aims to connect birds, humans, and the fitness programmed building together through the concept of movement. The Pottruck Gym, a destination for students, faculty and community members, is designed such that each floor is programmed for different kinds of movement. Each of these different exercise types activate the space in a unique way. In order to reflect and emphasize that programming, the window film design associates a different bird movement pattern to each floor of the building. The film displays not only the undulating flight path that a bird travels along, but it also displays the force of their flapping wings that propel them through the air. The exertion of energy that a bird uses to fly can be related to the energy used by the gym occupants executing their workouts. The pattern base uses an abstraction of a bird’s form to generate the rounded triangle shape. This triangle shape pointing in one direction is not only symbolic of a bird in flight, but is also a symbol for the occupants to remember to keep pushing forward on their journey to better physical and mental health.

Juxtaposed between historic buildings, the rear façade of the Wharton and Penn Engineering program’s Larry Robbins House has a strong relationship to the exterior courtyard and to the rest of the Penn campus. Taking inspiration from the intricate manganese iron-spot brickwork, we abstracted the image through an iterative patternmaking process. The pattern is made by a grid of circles and hexagons, each with two sizes, and then layered to create the effect of the brick surface. Along with blocking the reflection that is hazardous to birds, the intricate geometries come together to form an organic structure, mimicking the handmade texture of the brickwork.

Inspired by the inherent reflective quality of the window, this intervention proposes a series of stripes, where one side of the stripe is mirrored (facing the interior) and the other side is a buffed mirror-like silver color with a diminished reflection. This intervention aims to maintain what is oftentimes magical about buildings full of glass – the ability to see outside while being surrounded by reflection. The collegiate library is an ideal setting for this kind of intervention: the interaction between the interiority of intellectual thought and the exterior environment of social and communal dynamics that are enabled by the college institution. The outside texture of stripes emulates the existing architectural details and the long columns, which draw the eyes to the ground plane where the quad meets the library. Inside, the reflection of the interior alternates with views of the classic quad outside, creating a unique experience of being both within and outside of the library.

Windows and glass facades are seriously threatening the lives of wild birds. Inspired by the melodious chirping around us on campus, our proposal began with acoustic studies of the sound frequency of common species of birds, which include gray catbirds, yellow-throated warblers, and ovenbirds. These birds constitute an important part of the biological environment of the school district. We used their songs to compose the music score of the “warble symphony.” We generated the graphic pattern by further abstracting the frequency of the three species of birds into a composite image that was then pixelated to represent mountains and forests. This approach is meant to symbolize releasing the birds back to their larger population and environment.