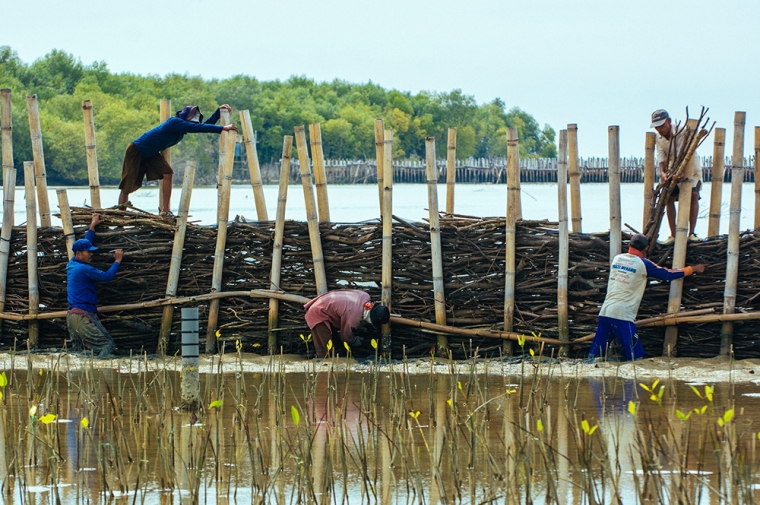 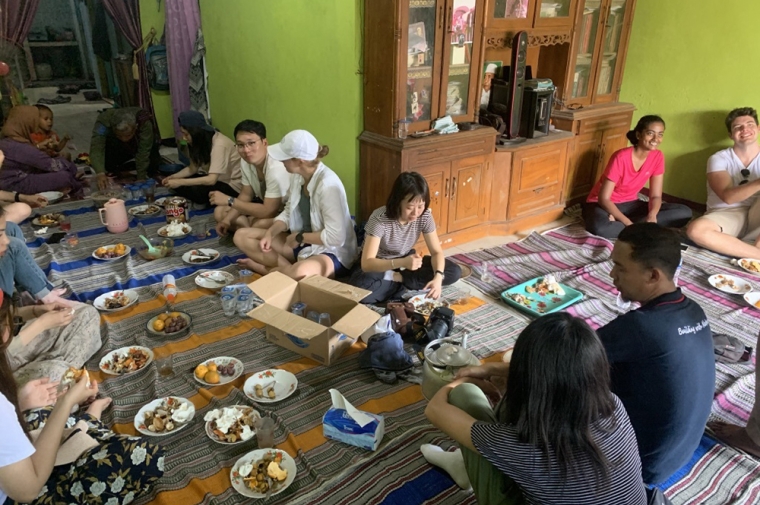 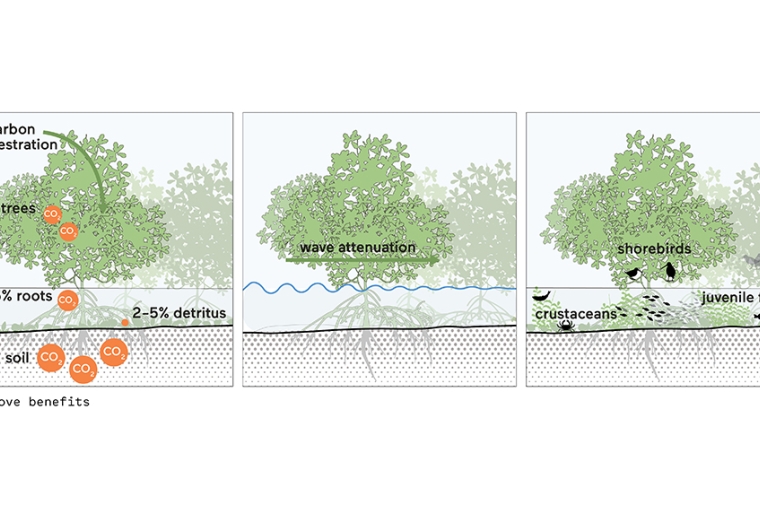 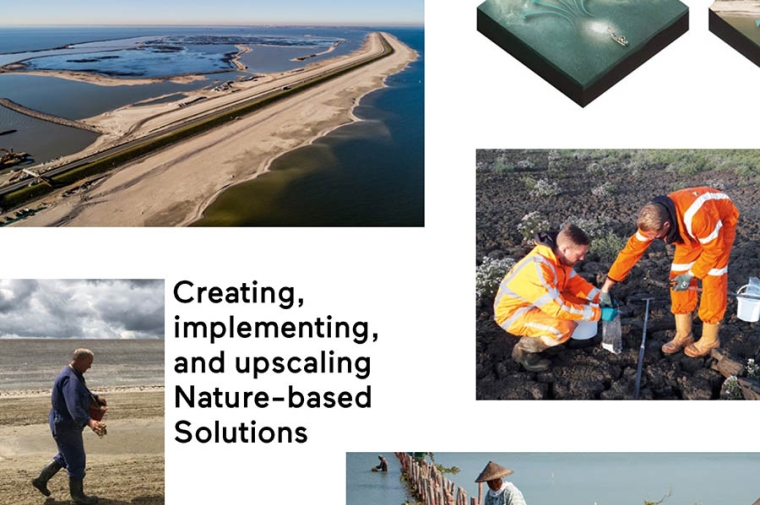 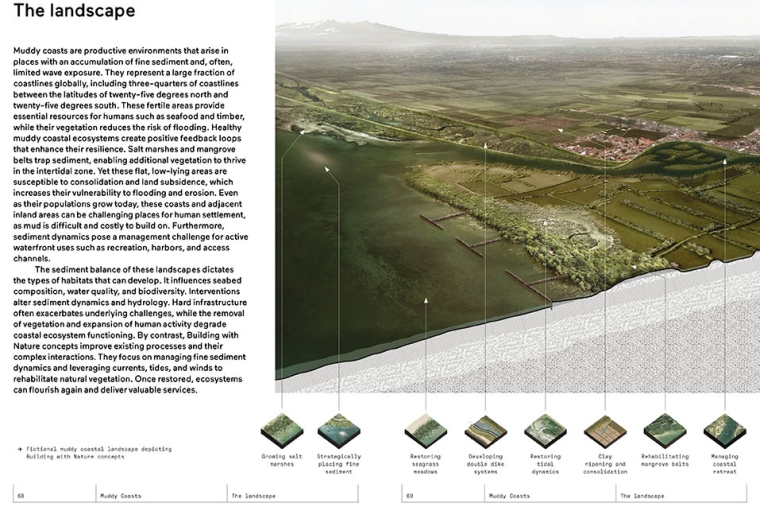 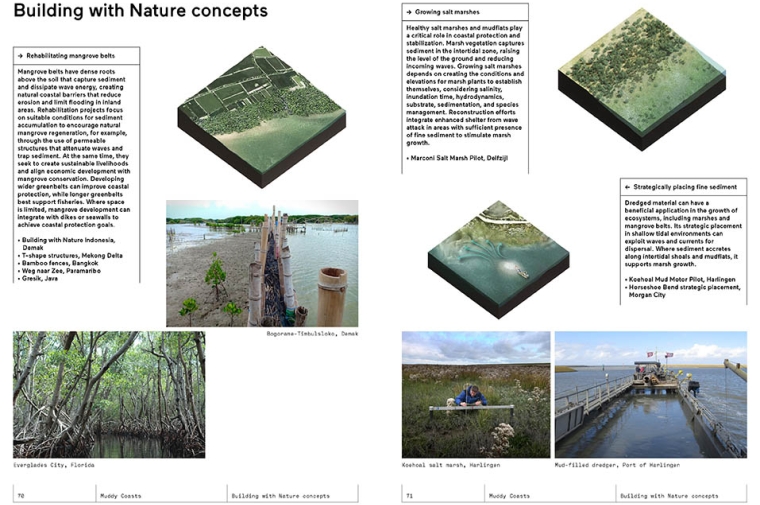 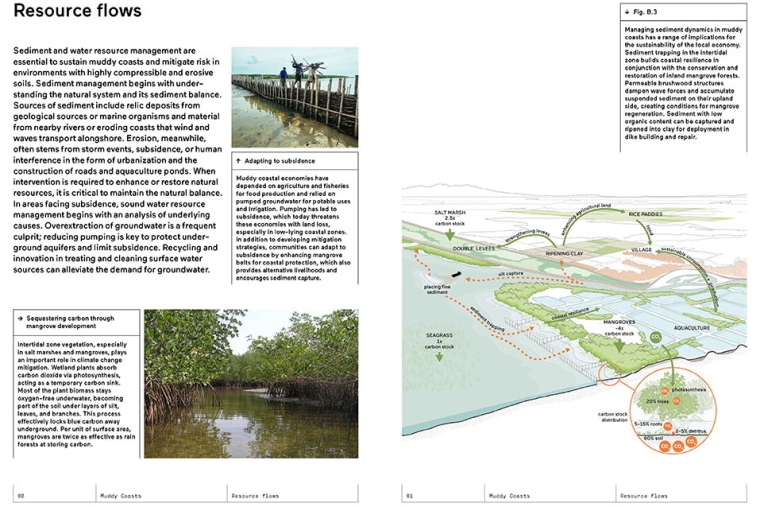 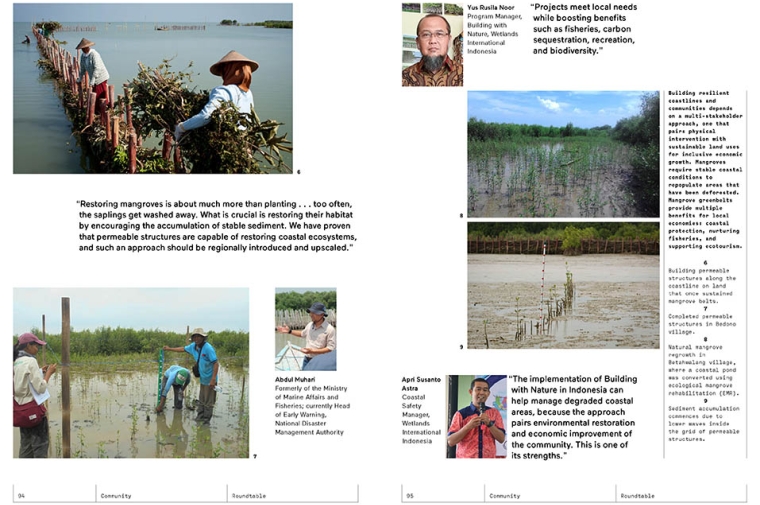 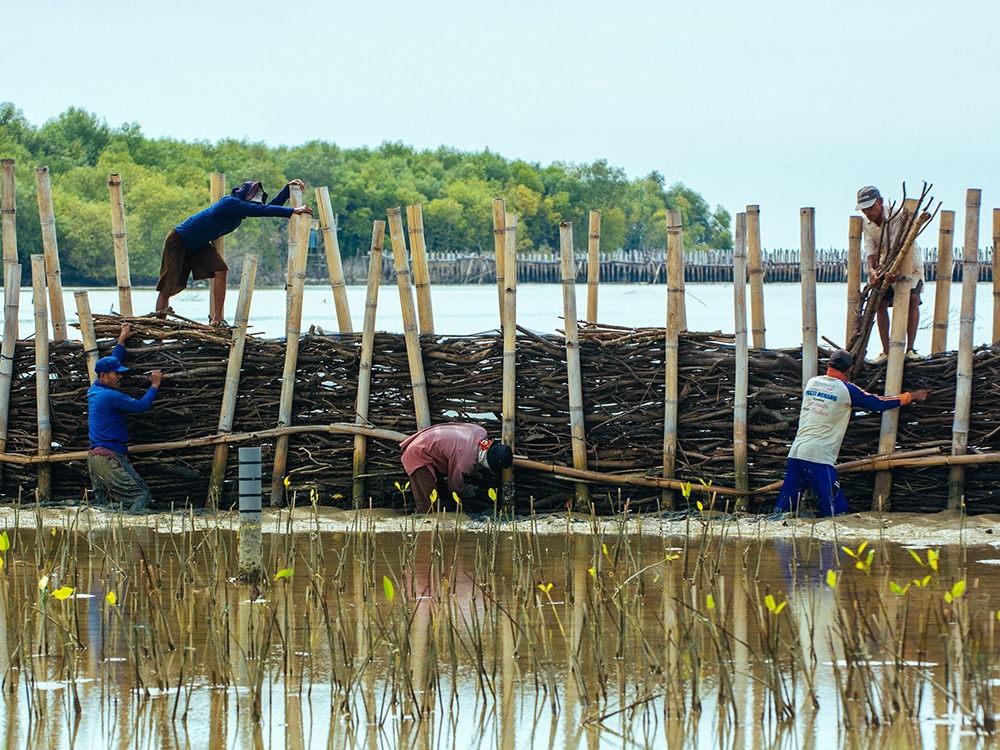 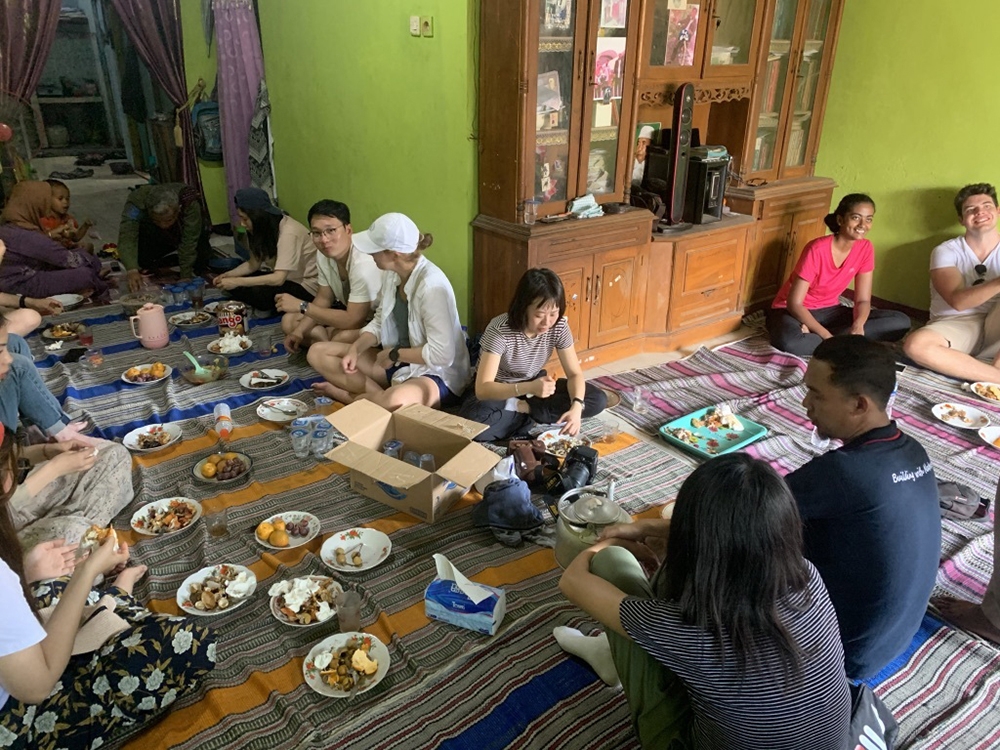 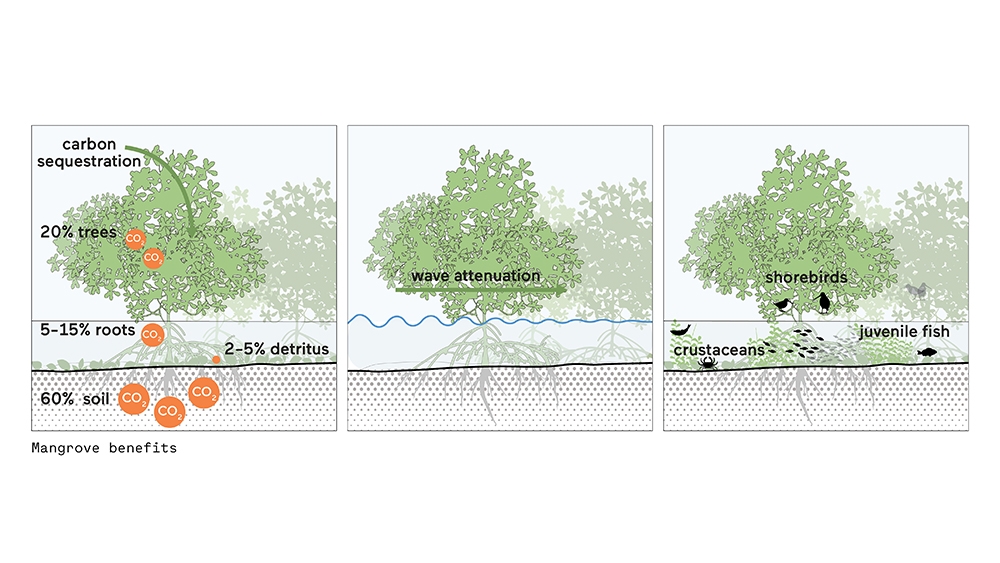 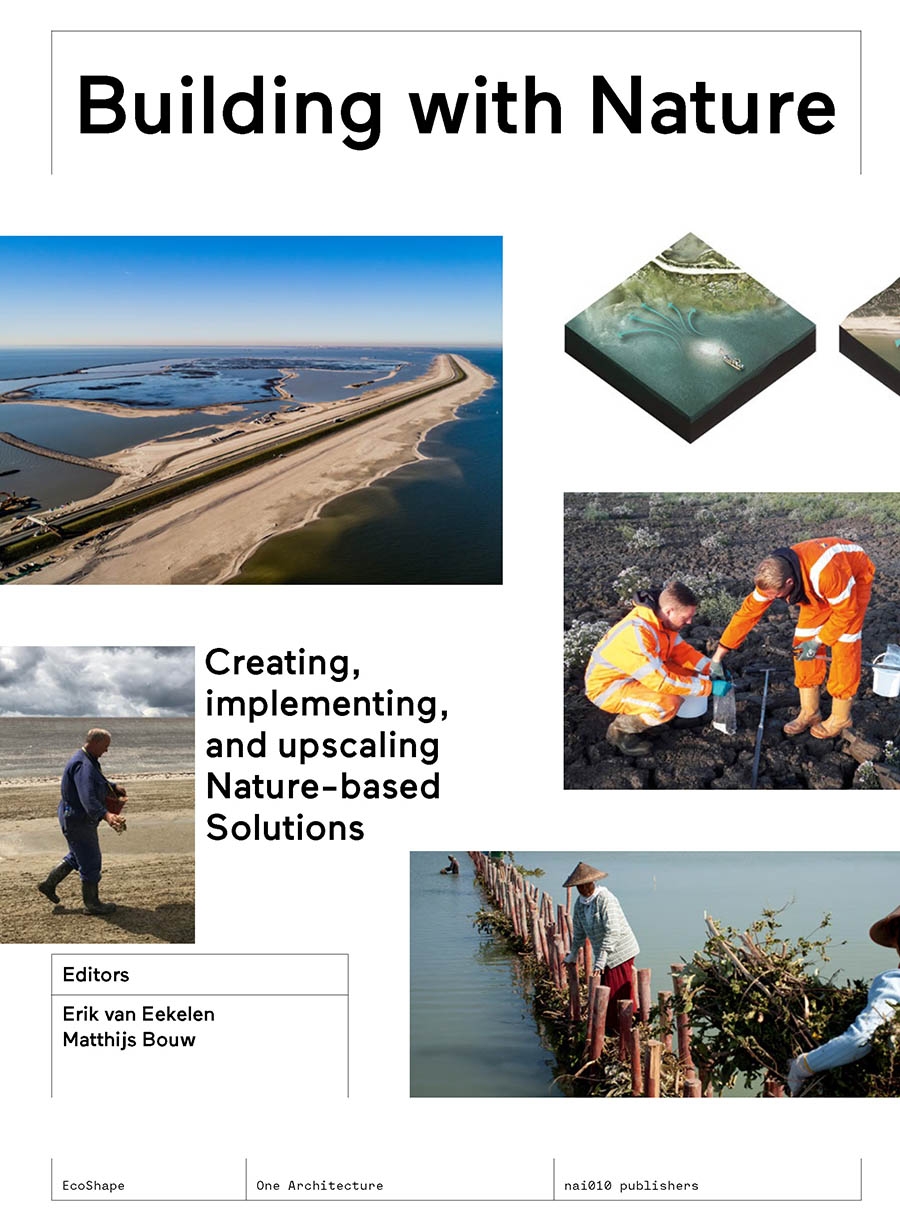 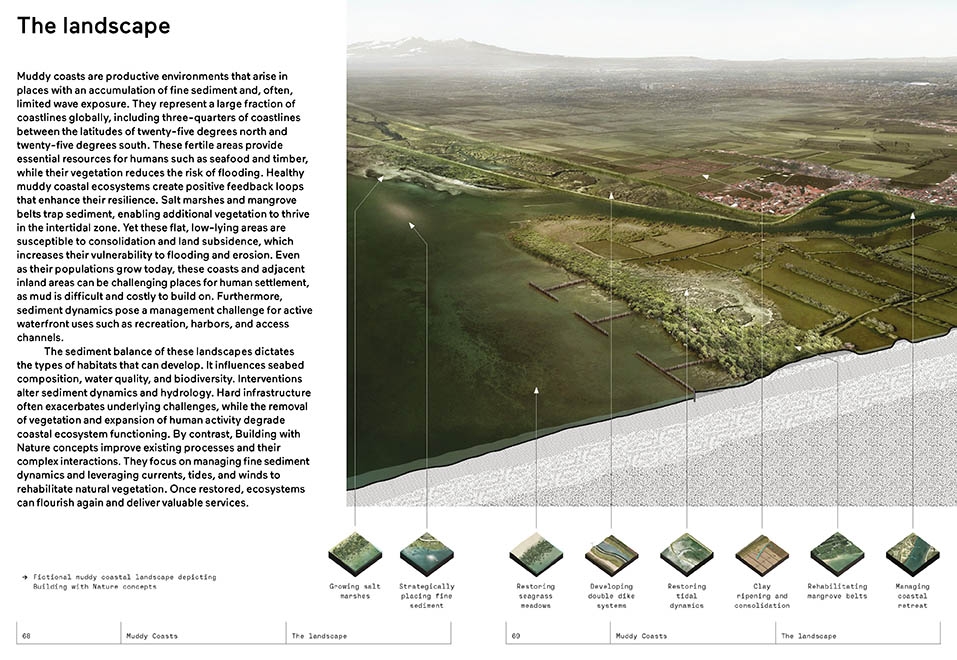 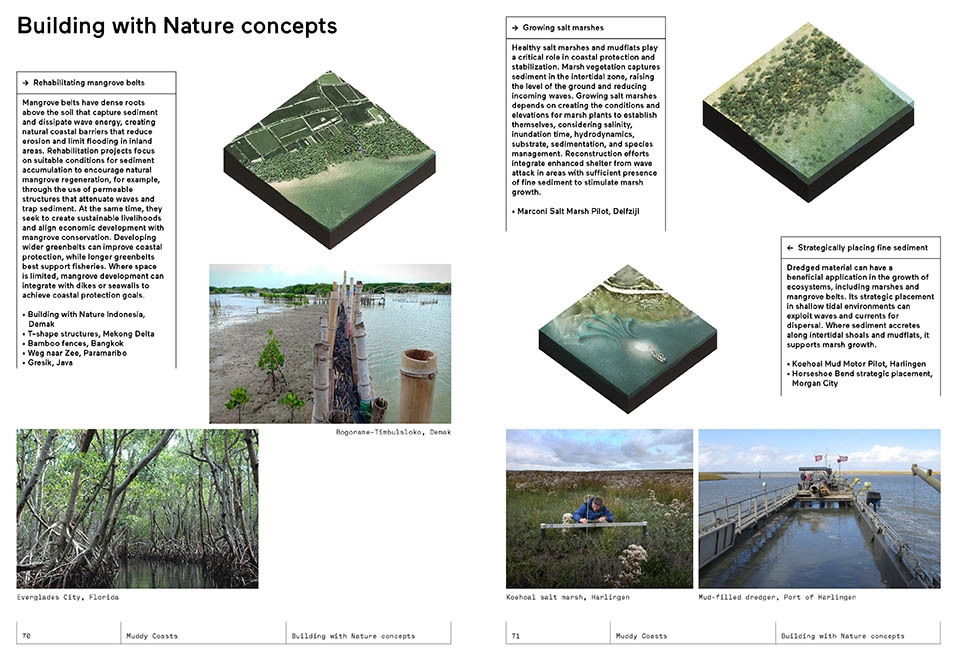 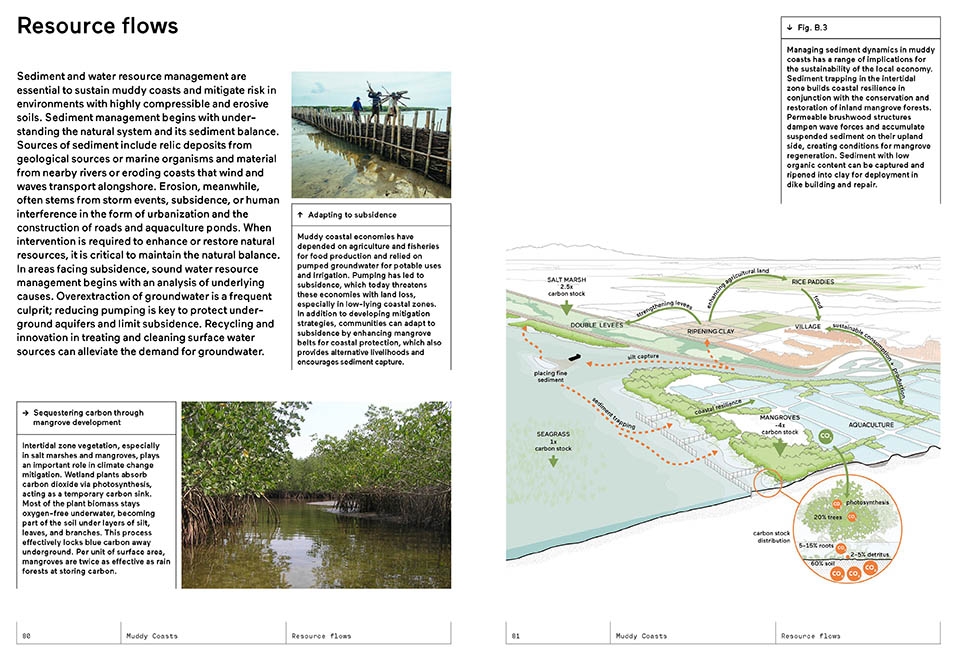 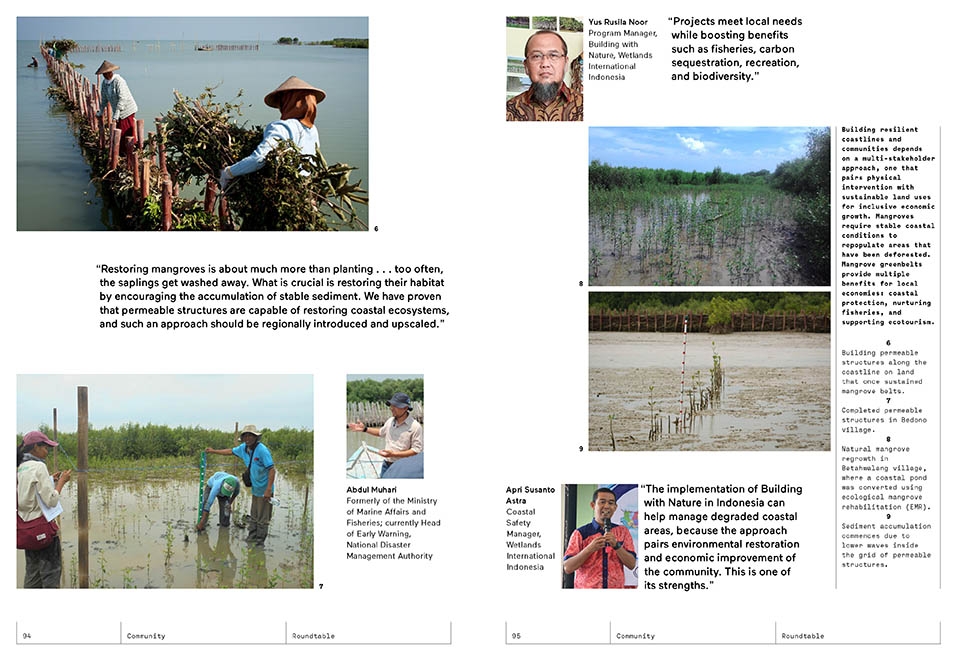 In a new book, Building with Nature: Creating, implementing, and upscaling Nature-based Solutions (nai010 publishers, 2020), experts from science, engineering, design and nonprofits describe the key concepts of EcoShape, a Dutch initiative to promote eco-friendly building practices through hydraulic structures. Edited by Matthijs Bouw, who is an associate professor of practice in architecture and landscape architecture and director of the Urban Resilience Certificate at Weitzman, and Erik van Eekelen, the book links building projects in Europe and Southeast Asia to their landscapes and economic and social systems, and provides a manual for “Building with Nature.” Building with Nature landscapes, systems, and concepts in the book are illustrated by One Architecture & Urbanism (led by Matthijs Bouw) and the information can also be accessed at www.EcoShape.nl. In this excerpt from his essay “Learning from Place,” Bouw describes a trip to Demak, Indonesia, with a group of students from the Weitzman School to see how EcoShape hydrological engineering projects are bringing urgently needed, nature-based solutions to local conditions that are rapidly changing due to the climate crisis and biodiversity loss.

Site visits specifically impact the many groups of design, engineering, and ecology students that visit Building with Nature projects. Young people are keenly aware of the challenges posed by the climate crisis and biodiversity loss; they understand the urgency to develop new paradigms for design and engineering now. Often, they are eager to learn from local communities and vernacular practices. For a group of architecture and landscape architecture students from the University of Pennsylvania Stuart Weitzman School of Design, touring the Building with Nature project in Demak, Indonesia, was a natural highlight of their study trip to Asia.

Through Apri Susanto Astra and Eko Budi Priyanto, the local representatives of Wetlands International, the student group connected with Robert Wahyu from Jelajah Tour. The business runs sightseeing trips in Semarang, often focused on the Dutch heritage of the coastal city’s Kota Lama district. Recently, there has been increasing demand to organize trips to coastal villages in Demak; a group from the Netherlands had visited the prior week. From Semarang, the Jelajah Tour van took the coastal road east. After passing Kota Lama, it crossed the 530-hectare Banger Polder, which was constructed with Dutch assistance in 2018 to manage floodwaters in the rapidly subsiding (by as much as eight centimeters per year) area. Further east, signs of subsidence were abundant. In the industrial area of Genuk, a number of estates seemed to be drowning in water. The van had to slow down periodically to navigate the significant height differences between bridges, culverts, and the sinking road. Some twenty kilometers east of the city, rice fields came into view along with more flooded land. At the end of the road in the village of Betahwalang, wooden homes from various eras stood side by side. The new houses were prominently raised above their older neighbors. Successive elevations over time reflected the rate of subsidence and could be readily understood at a glance.

Transferring from the van into fishing boats, the students could see the ecosystem services promoted by Building with Nature in action. Along the mangrove-lined channel, fishermen worked on platforms made from the same bamboo used to build permeable structures at the coast. Making their way onto newly formed land behind the fences, villagers explained how mangrove restoration took place with particular varieties and how this has encouraged sediment buildup. As it regenerates, the mangrove belt will attenuate wave energy during storms and protect the villages from continued coastal erosion.

In Demak, as elsewhere in Indonesia, the deforestation of mangroves has put local livelihoods at risk. Because mangroves are highly effective at removing carbon from the air, deforestation has destroyed major carbon sinks and released long-buried greenhouse gases, thus contributing to global warming. Mangroves can store twice as much carbon as salt marshes and up to four times as much as rainforests. They do so by rapidly converting carbon dioxide into biomass and storing dead material in the soil, where there is little oxygen. This form of “blue carbon” has a price on the global markets for carbon offset, which is now helping fund the restoration of mangrove belts worldwide, in part to mitigate the greenhouse gases released by earlier deforestation. The fishermen and women who stood nearby up to their shoulders in the water pointed to another benefit of mangroves. Their root systems form a protective, resource-rich habitat for smaller fish and crustaceans, which benefits nearshore fish populations as well as those farther offshore, at the reefs.

During the visit, it was clear the entire community was engaged in Building with Nature. In the community hall, a banner proclaimed, “Sugeng rawuh” (“welcome”). The kepala desa (the head of the village), a local police officer, and a group of villagers greeted the students. The introductory speeches and a slideshow on the importance of Building with Nature served a double purpose: helping visitors understand the project and describing community involvement in the program.

After the group returned from the water, lunch was served in a local house. Astra had arranged lunch on the condition that the student group paid double so that the entire group of fishermen, guides, and maintenance workers could join. Locals and students savored plentiful dishes of freshly caught seafood while sitting together on the carpeted floor.

In the Global South, the economic benefits of Building with Nature will be critical to its success. While ecosystem services, avoided losses, and local community impact are difficult to predict or measure and thus render “bankable,” they are nevertheless evident in Betahwalang. One aim of the EcoShape pilot in Indonesia is to develop better tools to analyze these benefits and use them to form a stronger basis for intended subsequent programs in Indonesia as well as other countries.

Building with Nature works from the idea that nature can be harnessed to address multiple sustainable development goals simultaneously, which represents a departure from conservation practice and is especially critical in emerging economies. The ambition of EcoShape is to replicate the successful integration of Building with Nature in a range of landscapes and environments elsewhere. One such place could be the city of Semarang. Later in the study trip, officials there shared plans that had been developed in the Water as Leverage program, which imagined a coastal zone of mangroves and wetlands integrated with the industrial estates and the port, tidal parks, and new retention ponds near Kota Lama, as well as the fishing settlements, and where sediment is put to beneficial use in flood protection. Were these to be realized, the strengthened ecosystem could extend thirty miles west from Demak. It would not only provide flood protection and enhance biodiversity but also support the fishing industry. Ideally, these Building with Nature measures coincide with improvements to the water supply, the state of which now contributes significantly to land subsidence.

The expertise with sand and mud that Building with Nature has developed in the past decade is crucial for addressing the big challenges of the current era: climate change-induced sea level rise, biodiversity loss, and subsidence. The first challenge indicates the need to raise and fortify coastlines to keep water out and protect our populations and economic activity. The second is to keep our natural resources—including beaches, marshes, and mangroves—from drowning to preserve their role in sustaining biodiversity. Both require large amounts of material: sand and other sediment. Large-scale, unregulated sand mining has had a devastating global environmental impact, often exacerbating floods, destroying ecosystems, and negatively affecting livelihoods in local communities. Traditional engineering uses a lot of sand, and it has altered streams such that sediment can no longer reach the sea. Harnessing the forces of nature to capture sediment is essential to mitigate these destructive practices. Using mud to make clay for dikes or develop protective mangrove foreshores are but two examples. Sustaining our coasts is another. To outpace sea level rise, however, we must strengthen the systems that protect and support us soon. Unlike traditional solutions, Building with Nature takes time. Ecosystems adapt slowly, and we are just beginning to discover how best to Build with Nature and to adjust our practices and institutions to facilitate implementation at scale. From this perspective, the interest of students in Building with Nature, and their engagement with sites such as the villages in Demak, suggests that the next generation of professionals will be committed to this urgent task.