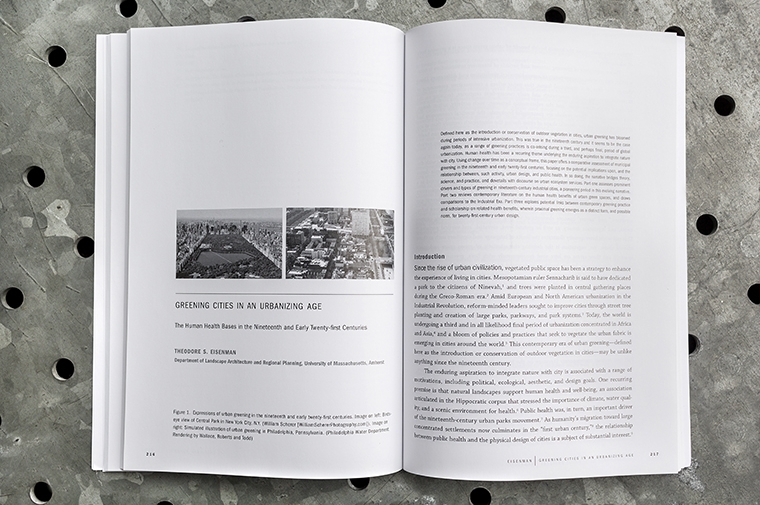 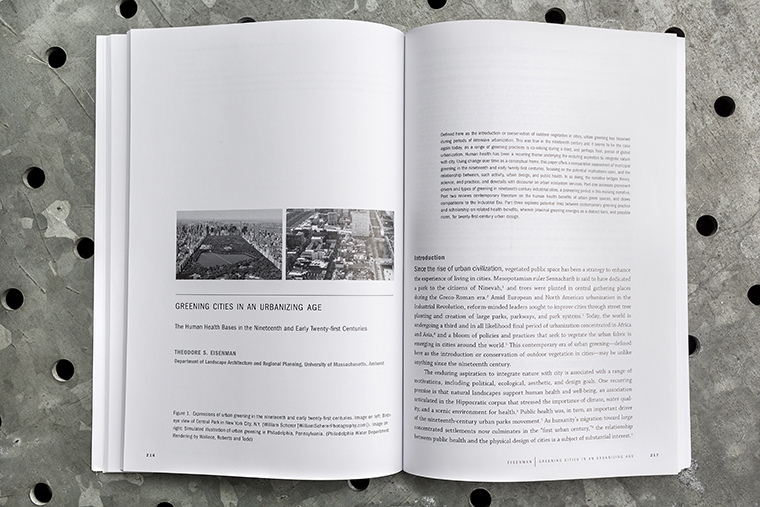 In “Greening Cities in an Urbanizing Age: The Human Health Bases in the Nineteenth and Early Twenty-First Centuries,” Theodore Eisenman, Assistant Professor in the Department of Landscape Architecture and Regional Planning, University of Massachusetts, Amherst, considers the research on physical activity as one of four health benefits of nature contact. Eisenman’s essay appears in the latest issue of Change Over Time, PennDesign’s journal of conservation and the built environment, which was the result of a symposium entitled Therapeutic Landscapes that was held at PennDesign April 9 - 10, 2015. The issue’s guest editor was Aaron Wunsch, Assistant Professor in the Graduate Program in Historic Preservation at PennDesign.

The world is experiencing a pandemic of physical inactivity and obesity.120 While the etiology of obesity is complex,121 excess energy consumption (dietary intake) relative to energy loss via metabolic and physical activity may be the most common cause.122 Increasing total physical activity is thus an important strategy to address obesity, as well as overall physical and mental health across the life span.123 Total physical activity can be characterized in three domains: work (e.g. construction; house cleaning); active transport (e.g. biking/walking to a destination); and leisure/recreation (e.g. jogging for exercise). Of these domains, the latter two are the most relevant for assessing links with urban greenery. Active transport (biking/walking) may be increased through natural features and vegetation by making routes more attractive. Yet Hartig et al. marshal evidence that distance to destination, availability of suitable infrastructure (e.g. sidewalks, bike paths), and safety are more important factors. They also cite two systematic reviews showing mixed findings, as well as studies suggesting that the same holds true for children and the elderly.124 Provision and access to green space and parks may in turn increase both leisure and active transport. However, reviews and studies addressing these associations also show mixed findings.125

Given the important role that physical activity is assumed to play in health-based arguments for green space, it is surprising that few studies have investigated the extent to which physical activity levels might mediate associations between nature and human health outcomes. Of four studies addressing this relationship, Hartig et al. only found one concluding that physical activity (recreational walking) was an important mediator.126 The green space/physical activity relationship is further problematized when considering the broader literature on built environment correlates of physical activity and obesity. Here, several review studies reveal complex patterns and inconsistent associations.127 Baumen et al. conclude that few environmental correlates have been identified for either transport or recreation activity,128 and several studies on leisure activity suggest that individual and social factors may be of equal or greater importance than the built environment.129 This may not, however, discount a relationship between green space and obesity. Kuo cites ten studies tying greener residential areas with lower rates of obesity, and suggests that this may depend less on links to physical activity and more on associations between nature contact and stress, impulse control, and adiponectin (a protein involved in regulating glucose levels and fatty acid breakdown).130

This would seem to be supported by several review studies showing beneficial mental health outcomes from exercising in greener areas.131 Yet a review of sixty studies found mixed and inconsistent findings on links between green space and obesity.132 One study also found that residents of sprawling U.S. counties—who ostensibly live amid more greenery—were likely to walk less during leisure time, weigh more, and have greater prevalence of hypertension than residents of compact counties.133 This points to the need for greater clarity regarding land use and urban form in the human health and nature contact literature.

131. Jo Barton and Jules Pretty, “What Is the Best Dose of Nature and Green Exercise for Improving Mental Health? A Multi-Study Analysis,” Environmental Science & Technology 44, no. 10 (2010): 3947–55; D. E. Bowler et al., “A Systematic Review of Evidence for the Added Benefits to Health of Exposure to Natural Environments,” BMC Public Health 10 (2010): 456; J. Thompson Coon et al., “Does Participating in Physical Activity in Outdoor Natural Environments Have a Greater Effect on Physical and Mental Wellbeing than Physical Activity Indoors? A Systematic Review,” Environmental Science & Technology 45, no. 5 (2011): 1761–72.