At this year’s United Nations Climate Change Conference COP 25, now in its second week in Madrid, Penn has its largest presence ever, with representatives from the Kleinman Center for Energy Policy, Perry World House (PWH), Penn Law, the Weitzman School of Design, Penn Institute for Urban Research (Penn IUR), and Wharton. The University also secured observer status for the first time.

“This status allows Penn to nominate and support faculty, staff, and students to attend COP on official credentials,” says Cornelia Colijn, Kleinman executive director. “This means the University gets to join the governments, international organizations and nonprofits, businesses, and members of civil society who are working on a range of climate change issues today.”

COP stands for “Conference of the Parties,” and specifically, it means member states that signed onto the 2015 Paris Agreement and other initiatives put forth by the UN Framework Convention on Climate Change (UNFCCC). At this meeting, treaty signatories are negotiating the rules of the Paris Agreement—how countries will track progress, what financing mechanisms will be put in place—at the final gathering before 2020, the point at which many participating nations must submit new climate plans to UNFCCC.

Beyond the member countries, observer-status participants like Penn join UN staff and other organizations to hold important conversations around pertinent climate-related issues. “Everyone who works on these at the international policy level will be at this conference,” says Michael Weisberg, a Penn philosophy professor and PWH faculty fellow, who has several roles at this year’s COP.

On Friday of last week, he moderated part of a forum centered on oceans, with his section focused on technology and innovation, funding, and education related to resilience and adaptation around sea-level rise.

“In many parts of the world, not only are they going to be the hardest hit from climate change and will have to do the most about resilience planning, but they also have the least amount of education about it,” he says. “In Philadelphia, we worry that sea-level rise will mean moving the airport. But in some places, it will mean moving whole towns.” 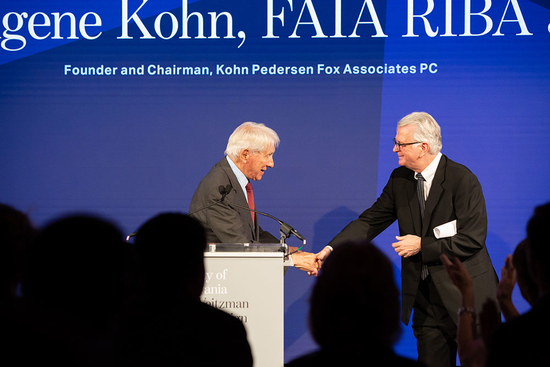