By Kristin García for Penn Today 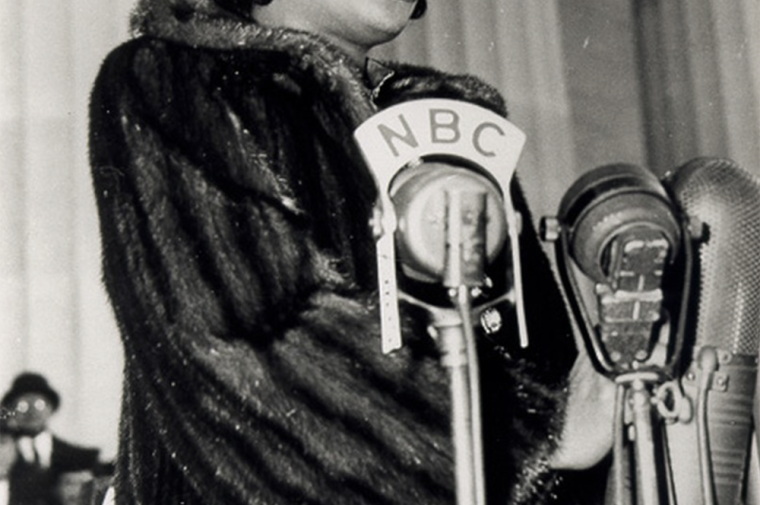 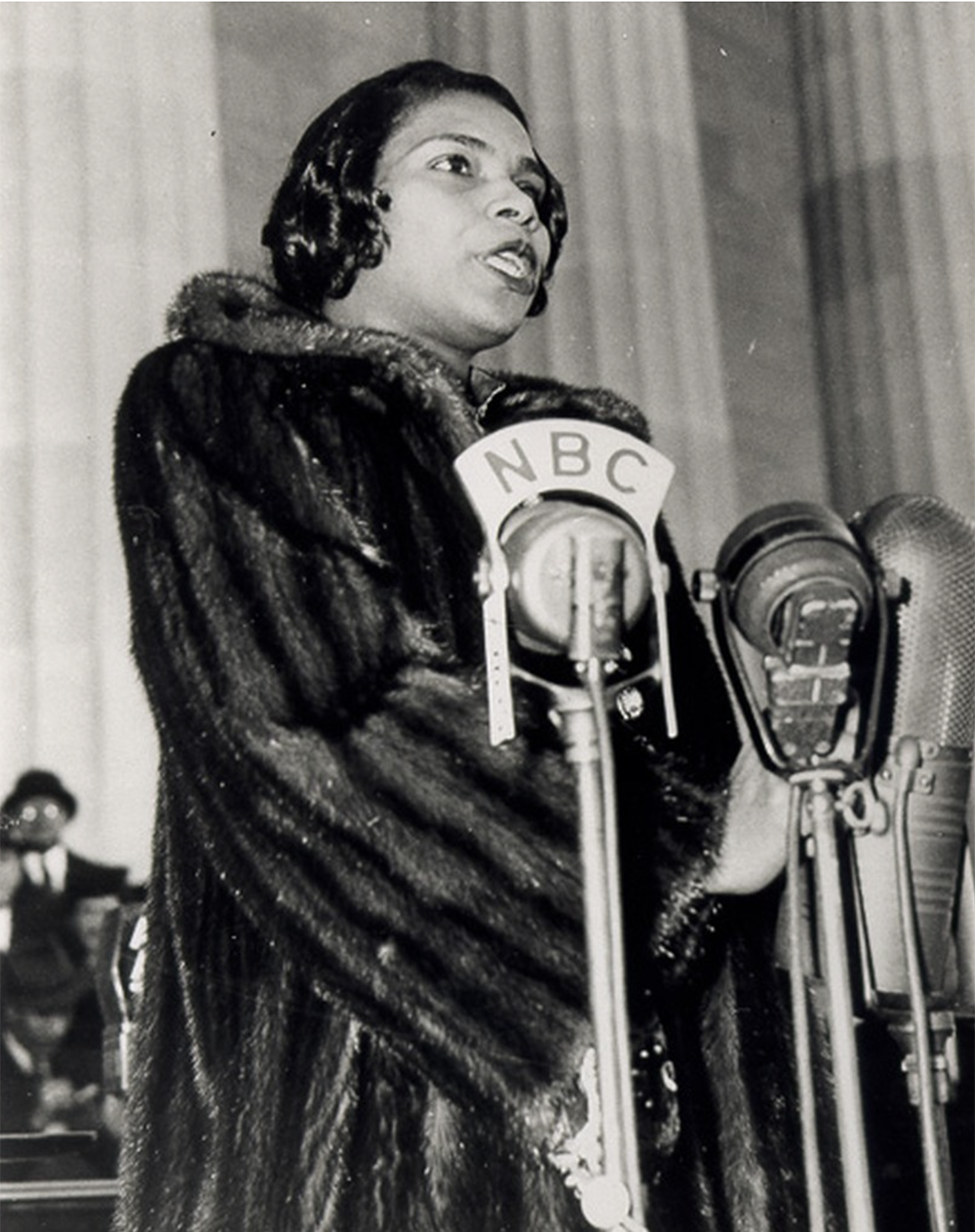 Marian Anderson was at her Philadelphia home at 762 S. Martin St. when first lady Eleanor Roosevelt called, asking her to sing at the White House. In 1935, she became the first Black artist to do so. Four years later, Anderson sang at the Lincoln Memorial to 75,000 people dressed in their Easter Sunday best after the Daughters of the American Revolution, despite Roosevelt’s advocacy on the singer’s behalf, denied Anderson the right to sing in their Constitution Hall auditorium. Anderson stood at the top of the steps at the Memorial and closed her eyes. Singing a cappella, she hit every note on pitch. A young Rev. Martin Luther King Jr. was among those 75,000 in the audience.

Years later Anderson picked up that same phone, still preserved at 762 S. Martin Street, to hear King on the other line, telling her that performance was the inspiration for his March on Washington address, where King delivered the “I have a dream” speech, says Jillian Patricia Pirtle, CEO of the Marian Anderson Museum and Historical Society. Anderson is connected to musical history, civil rights history, and to the city of Philadelphia, Pirtle says.

Many touch points, including the church at 12th and Bainbridge streets in which Anderson first began to sing, are lost, says Aaron Wunsch, associate professor in Penn’s Graduate Program in Historic Preservation. The Marian Anderson house, which the singer purchased in 1924 for $4,000 cash, is one of the few sites associated with important civil rights figures in Philadelphia, Wunsch says. “And Marian Anderson is definitely one of them, in addition to being an extraordinary musical talent.”

For hundreds of years, there’s been a history of erasure and forgetting of Black heritage and achievements, not just in Philadelphia, but in America in general, says Randall Mason, professor of historic preservation and city and regional planning. The Marian Anderson Museum is one of the “important institutions in Philadelphia that have worked against that,” he says, along with the African-American Museum, the Johnson House, and the Paul Robeson House, among others. “These are modest places with outsize missions: small sites in a city that is overwhelmed by narratives about the birth of a nation.”

Preserving Black history is an increasing priority, Mason says. “The public has a sense that preservation is about preserving a building as an artifact, putting it behind glass,” but it’s an evolving dynamic relating to the city’s identity. Preservation as cultural practice is about expressing ideas rather than stopping change, he says. “What does Philadelphia want to pass down to future generations?” Mason asks. “Preservation consists of an ongoing conversation about what things the city wants to keep around to remind them about who they are.”

“There are a whole range of civil rights issues that need acknowledgement and need visibility in public space as part of what’s acknowledged as heritage,” says Mason. “Seeing one’s reflection in official heritage places” is an important part of “our responsibilities and rights to one another as citizens.” Preservation, he says, is part of civil rights.

Philadelphia has made strides in this area, with house museums and Underground Railroad sites in Center City and along Germantown Ave., along with the Octavius Catto memorial at City Hall and the president’s house memorial at 6th and Market streets as an acknowledgement that the first presidents of our country owned slaves, Mason says.

He’s seen this evolution during the last 20 years in his students at the Weitzman School of Design, who are “not just expecting, but demanding change,” Mason says. “There is really a desire to engage and involve ordinary citizens in meaningful ways in the decision-making.” As the field of preservation changes in terms of who does the preservation, who makes decisions, and who drives the field into the future, Mason hopes this will lead to a greater level of accountability and fewer demolitions.

There are two main challenges facing the preservation of historic Black Philadelphia, Wunsch says. First is the integrity argument, which asks how much of the original building is still intact. This criterion is “inherently biased towards high-end construction,” says Wunsch, when many historically important Black sites were either built out of bricks or wood or were designed to be ephemeral and hidden from sight, like Underground Railroad sites.

“The integrity standard, by default, becomes a standard whereby buildings built by people on the margins aren’t worth saving,” Wunsch says. “If you’re going to take that heritage seriously in the built environment, you may have to reexamine the integrity argument and recalibrate it for what you’re actually trying to preserve.”

A second challenge is “the notion that what really matters in historic Philadelphia is the stuff at the city’s core, namely around Society Hill and Old City and that everything else is peripheral, not just in terms of geography, but in terms of importance. That quickly, as you can imagine, eliminates most of Black-built heritage in the city,” says Wunsch. “We’re losing those resources now at a much faster pace.”

The original gold standard for preservation was buildings designed by famous architects, Wunsch says. While those buildings are often worth saving, this criterion is “maybe the narrowest definition of preservation possible,” he says. Preservation has multiple goals. “One of them is the ability to ground people in history and to tell stories about places that make people feel connected to those places.”

Preservation is also part of social and economic justice, Wunsch says. “There’s this sort of notion, largely implicit, that when it comes to Black heritage, a mural or a plaque is sufficient” because the buildings have been altered or weren’t built to last. “So, you get plaques for Black heritage and beautifully preserved masonry buildings for white heritage,” he says. “There’s a reason that we have Independence Hall instead of a plaque of Independence Hall. There’s a reason that you want to go and see Betsy Ross’ house rather than a plaque of Betsy Ross’ house.

“Having the material stuff actually does matter,” he says. “Stories become much more compelling when they are connected to physical fabric.”

For Akira Rodriguez, assistant professor of city and regional planning, it is essential that historic preservation is also connected to the lives of contemporary Black Philadelphians, worked in conjunction with essentials like access to fair housing, schools, and transportation. “To me, the purpose of history is to teach,” she says, so historic homes and districts need to be “resourced and integrated into the overall narrative of the city, not a site of exceptionalism but an ongoing movement.”

Launched in the fall of 2020, the Center for the Preservation of Civil Rights Sites is working on preserving aspects of the built environment that speak to the Civil Rights Movement. The Center grew out of a 2019 partnership project with Tuskegee University to support their capacity to teach preservation, says Mason, who serves as faculty director. The project now has three components: teaching, research, and field projects.

The two field sites selected for work this summer reflect this commitment. The first, the Armstrong House, is a one-room schoolhouse in Macon County, Alabama, part of the effort to create rural schools for Black children when they were denied the right to be educated alongside their white counterparts.

The second partnership will be with the Marian Anderson Museum working with the Natural Trust and the Preservation Alliance of Greater Philadelphia to supplement the research and analysis. “What is the next life for this small house museum?” Mason asks. “We can do something supportive of their forward-looking management.”

“We are the keepers of the legacy of American history, our history, our people’s history and culture. It’s a lot more than just signing up for a job,” says Pirtle an artist and scholar in her own right who was selected for her role by the museum’s founder, Blanche Burton-Lyles. “If the building gets lost and not supported, then the story gets swallowed up and lost as well.

“This is continuing to preserve the history of Marian Anderson, of Black artists, of Black culture, and Black people so that the story can continue to be told in the right way for generations to come and we can be supported and uplifted at the same time,” Pirtle says.

In the Graduate Hospital area of Philadelphia, near Ultimo Coffee, a corner store, and Webster Street Investment Advisors, the Marian Anderson Museum remains, its three-story brick façade welcoming new generations in the midst of a changing city.