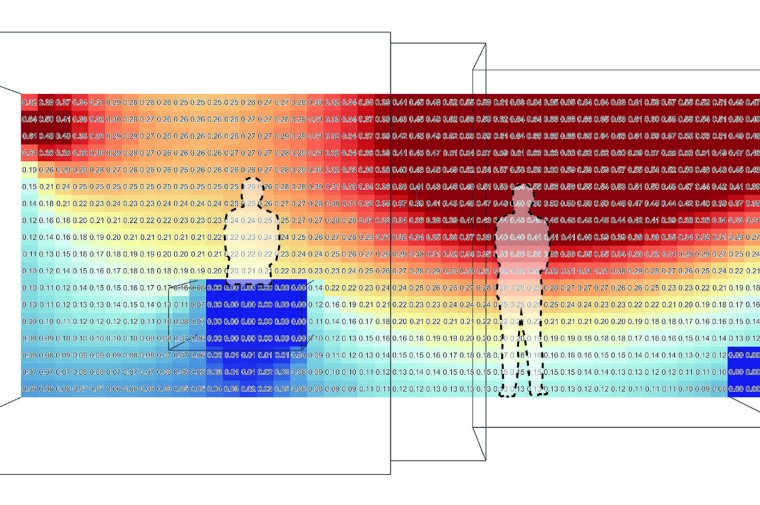 Two studies by Dorit Aviv, assistant professor of architecture and director of the Thermal Architecture Lab at Weitzman, show how architecture can help create interior spaces that are both COVID-safe and energy efficient.

The second paper, published in Applied Energy, describes the massive amount of energy required to increase ventilation in current HVAC systems and provides an approach for creating comfortable, well-ventilated indoor environments using radiant cooling. This study is the result of a collaboration between Penn, Princeton University, the University of British Columbia, and the University of California, Berkeley.

Ultraviolet germicidal irradiation (UVGI) devices use short-wavelength ultraviolet light to inactivate viruses, bacteria, and other pathogens by destroying their DNA or RNA. UV light is highly effective and has long been used to clean air and surfaces, with increased uptake in settings such as subway cars during the pandemic. However, UV light can also damage skin and eyes and must be used cautiously in occupied spaces.

Striking a balance between efficient disinfection and personal safety is fundamentally a spatial problem, says Aviv, and in this study the researchers used their architectural expertise to determine optimal placement of a UVGI device to sterilize a space safely. “You’re trying to disinfect the air but also make sure people are safe, so it means you need to understand how the device is working throughout the space,” she says.

For their Indoor Air paper, the researchers used simulations of an industry-standard UVGI device and looked at how different design variables impacted the distribution of UV light between a room’s upper zone, where disinfection of aerosols should take place, and a lower “occupied” zone which people inhabit and where UV light leakage should be avoided as much as possible. “The idea is to create a high intensity irradiation zone in the upper part of the room and make sure no high-intensity radiation reaches the person in the lower zone,” says Aviv about the setup.

The researchers found that ceiling and mounting height had a major impact on the efficiency of disinfection in the upper zone. Based on their simulations, the researchers recommend that UVGI device height be increased wherever possible. This not only increases the disinfection rate but also reduces the possibility of UV exposure in the occupied zone.

The variable that was found to have the biggest impact on reducing leakage was material reflectance. Because UV light can be absorbed or reflected by a material, much like visible light is, using paints or wall coverings with lower reflectance coefficients reduced the likelihood of UV forming dangerous “hot spots” in the occupied zone. Importantly, changes in reflectance didn’t impact disinfection efficiency in the upper zone.

Along with guidance on how people can install these devices in a way that is both effective and safe, Aviv’s group is now studying the role of air flows in UVGI disinfection, key insights which could be used to direct how contaminated and clean air moves within a room.

Most modern buildings have centralized heating, ventilation, and air conditioning systems that heat or cool external air before it is brought indoors. Before the pandemic, one common way to reduce energy use was to recirculate air, and building standards generally only require 10-20% of outdoor air intake at any given point in time.

Now, because of the risks of airborne exposure to COVID-19, the American Society of Heating and Air-Conditioning Engineers recommends increasing the amount of outdoor air to avoid recirculating virus particles. However, doing this within the current HVAC paradigm means a massive increase in energy usage in an already highly-carbon-intensive sector, putting the health of a building’s occupants and the environment at odds.

In their Applied Energy study, the researchers first modeled the energy requirements needed to increase the outdoor-to-indoor-air ratios in several cities in the United States at different climactic zones. In hot and humid cities like Miami, for example, the researchers found that as much as a 300% increase in energy output was needed in order to use 100% outdoor air.

To address what could be done to increase ventilation and keep spaces comfortable without using more energy, the researchers detail a simple, cheap, and scalable solution using radiant cooling systems. This system decouples air temperature control from ventilation and comfort by relying on surface-level cooling alongside natural ventilation.