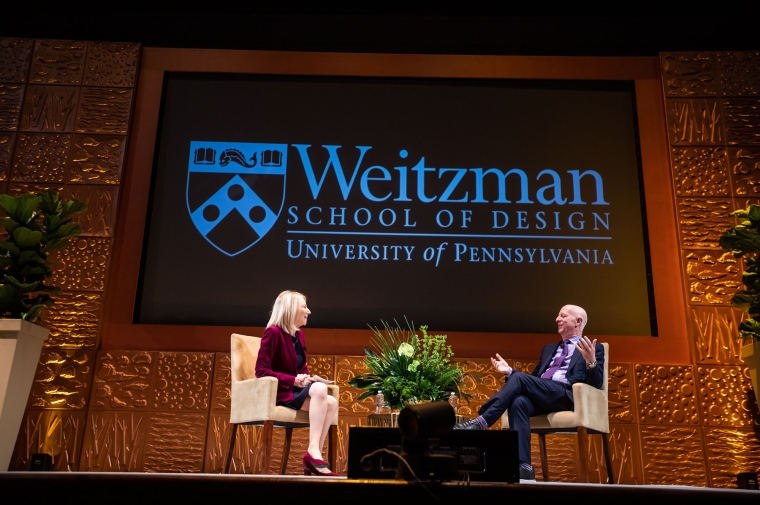 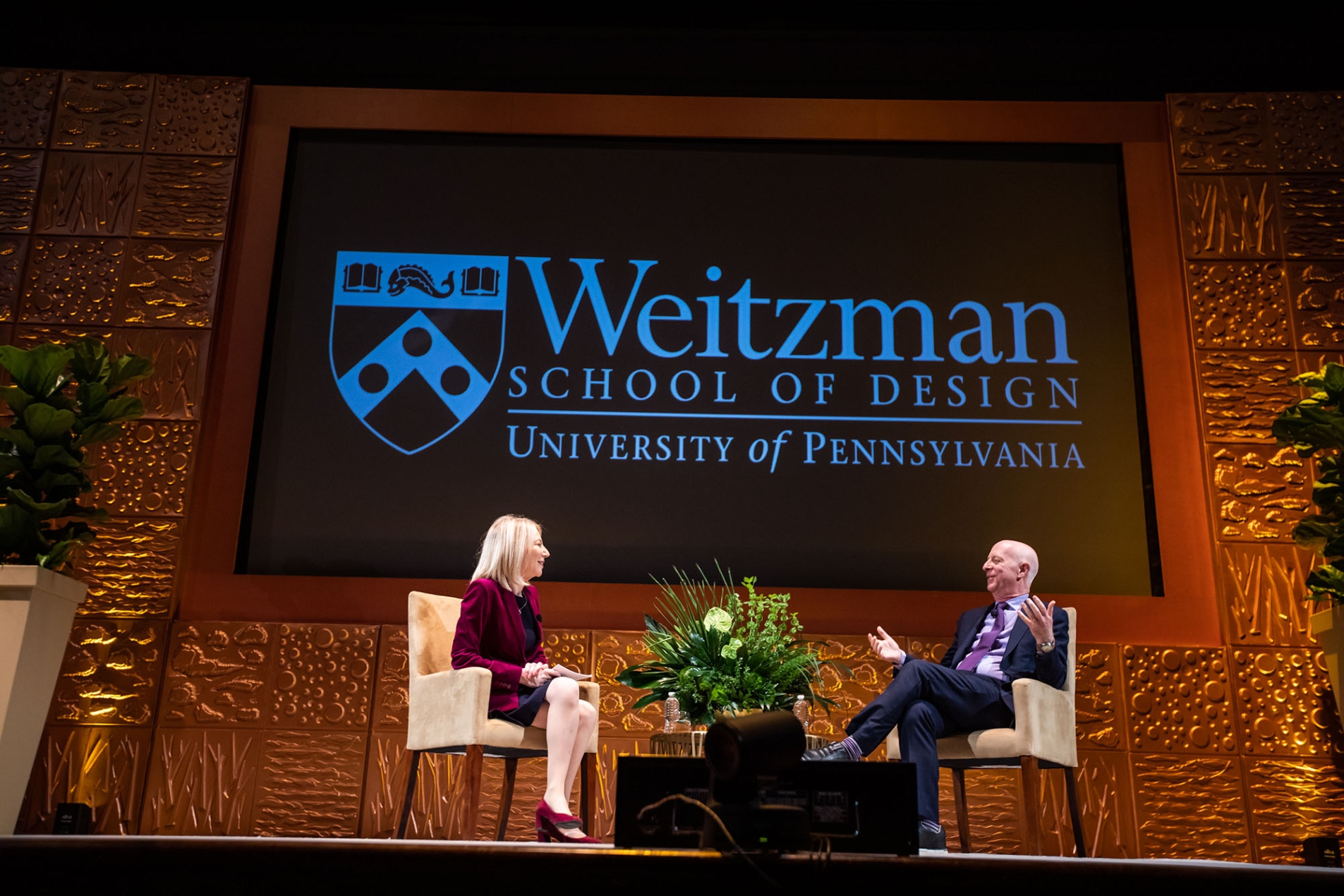 The second of two reports on The Weitzman School: A Celebration of Design.

Hundreds of faculty, alumni, students and guests gathered at Meyerson Hall, Irvine Auditorium, and the plaza outside Meyerson on October 3 to celebrate the naming of the University of Pennsylvania Stuart Weitzman School of Design. Special guest Stuart Weitzman, a 1963 Wharton School graduate who built an internationally renowned brand of designer shoes, was present for the celebration, along with his family. At the naming ceremony capping off the day’s public events, the expansive outdoor space situated between Meyerson Hall and the Fisher Fine Arts Library was formally recognized as Stuart Weitzman Plaza — with a planned redesign by professor of practice emeritus Laurie Olin and his colleagues at OLIN — and a bust of Weitzman was unveiled by Penn President Amy Gutmann and Dean Fritz Steiner, to be placed permanently in the lobby of Meyerson Hall.

The celebration began with two panel discussions and a student exhibition in Meyerson Hall.

The first panel, moderated by Philadelphia Inquirer architecture critic Inga Saffron, was titled “Balancing Acts: The Interplay of Design, Technology and the Natural World.” Panelists were James Corner, founder and CEO of James Corner Field Operations and professor emeritus at the Weitzman School; Marion Weiss, co-founder of WEISS/MANFREDI and Graham Professor of Practice in Architecture; and Doreen Lorenzo, assistant dean for the School of Design and Creative Technologies at the University of Texas, Austin. The discussion turned on questions about balancing aesthetic and social concerns in design, the gap between public and private design projects, and the use of technology in public spaces.

Increasingly, Saffron said, good aesthetic design is seen as elitist, even while developers say they can’t afford to pay for it. What impact does that tension have, and what role does style have in contemporary design?

“I think there’s a common view out there that design is the surface gloss — that it’s not necessary,” Corner said. “... [But] it should not be viewed as the gloss or the surface that comes afterward. It should be viewed as the thinking that works through the issues to produce the work.”

Design is not just “the visual artifact,” said Lorenzo, but the process of working through problems that need to be solved. Weiss agreed.

“What architects do, what landscape architects do, and what designers do is that they take a disparate set of impossible and improbable things that need to be solved all at once and, they think about something that is so essential and imaginative that either it does answer all those things at once or it basically says, ‘Actually, there’s a different question at stake,’” Weiss said.

The second panel, titled “Whom Do We Honor…and How? Exploring the Meaning of Memorials,” was moderated by Lisa Servon, Kevin and Erica Penn Presidential Professor and chair of City and Regional Planning for the Weitzman School. It included Associate Professor of Fine Arts Sharon Hayes, Associate Professor of Historic Preservation Randy Mason, and Christian Benimana, senior principal and managing director at MASS Design Group.

Servon asked: Why is there a renewed urgency around public memorials?

“Our society is so fractured and [issues] so contentious and [people] so pitted against each other in so many different ways that we need more venues to work these issues out, to express differences, and to envision how we might live together,” said Mason, who has spent several years working on genocide memorials in Rwanda.

Benimana co-created an installation at this year’s Chicago Architecture Biennale as part of the Gun Violence Memorial Project honoring the victims of gun violence in the U.S. Benimana said that he had spoken with a mother whose son had been killed by gun violence, who said that just as painful as his death was the fact that his name had been lost in a sea of statistics.

“We’re challenged to think about, how do we reverse that effect?” Benimana said. “That’s going to take all these people and all these stories that are lost into statistics — bringing them back into life.”

The panel built on discussions happening all around the U.S., particularly as the public has reconsidered the meaning of Confederate memorials in the wake of white supremacist attacks like the killing of nine black churchgoers in Charleston, South Carolina, in 2015. In Philadelphia in 2017, Weitzman faculty members Paul Farber and Ken Lum, Marilyn Jordan Taylor Presidential Professor and chair of fine arts, organized a citywide exhibition of public art, called Monument Lab, meant to fill the city with memorials that tell a broader story of history than existing monuments do. Responding to the fact that there are only two women among the hundreds of historic figures depicted in public sculptures in Philadelphia, Sharon Hayes created a monument called “If They Should Ask” in Rittenhouse Square featuring a long list of names of women who deserve memorials of their own. American public memorials have often served to represent the white patriarch as the “ideal citizen-subject,” Hayes said.

“I have really come to see the project of monumental-ization, in the U.S. in particular, as a political project rather than a historic project, in that there’s no natural history that these objects are representing,” Hayes said. “What I think has changed is the political landscape ... I think that there are cracks and fissures and openings that allow for a real interrogation of white patriarchy and of white supremacy.”

Also in Meyerson Hall was a special exhibition featuring works by undergraduate and graduate students from across the University, curated by Richard Weller, professor and chair of landscape architecture and Meyerson Chair of Urbanism. The works dealt with environments as diverse as the Mississippi River basin, where devastating flooding has become commonplace, and Manhattan’s Hudson Yards, where a series of mixed-use high rises has been erected above the rail lines.

Following the two panels, Penn President Amy Gutmann and Pulitzer Prize-winning architecture critic Paul Goldberger had a wide-ranging discussion entitled “The Critic Weighs In: A Conversation About Design, Architecture, Landscape and Planning” on stage at Irvine Auditorium and fielded questions from the audience. “I just want to stare at this room for five minutes,” Goldberger said at the beginning of the conversation, praising the work of Julian Abele (BArch’02), the architect primarily responsible for Irvine Auditorium, who was also the first African-American graduate of the Graduate School of Fine Arts [as the School was then known] at Penn. Noting the litany of world-renowned designers that have been associated with the design school at Penn – including Louis Kahn, Robert Venturi and Denise Scott Brown – Goldberger said that Penn had managed to avoid falling under the influence of a single dominant personality.

“There’s always a risk that great figures will create too intimidating a history or will in some way suggest that this is all about them. I don’t think that’s ever really been a problem at Penn,” Goldberger said.

Dr. Gutmann engaged Goldberger on American baseball parks, whose history, he noted, “mirrors American urbanism and the whole history of our culture’s relationship to our cities.” Goldberger was effusive in his praise for Philadelphia’s Shibe Park, as Connie Mack Stadium was known when it opened in 1909, but was more qualified in his assessment of Citizens Bank Park, which he described as “an urban ball park in search of an urban setting.”

After the program at Irvine, hundreds of guests returned to the plaza outside of Meyerson Hall for a naming ceremony and reception hosted by President Gutmann and Dean Fritz Steiner.  There, renderings of the new design for the Stuart Weitzman Plaza, the new signage intended for Meyerson Hall, and a bronze bust of Stuart Weitzman were displayed.  The fabrication of the bust, as described by Dr. Gutmann in her remarks, drove home the integral role of technology in the work of artists and designers today. The multi-step bust creation process required Weitzman to sit for a 3D scan, which provided data for the production of a foam form, which was then cast in wax and finally in bronze.

In his remarks at the ceremony, Weitzman noted that the school’s architecture program had recently risen in the national rankings to the 9th spot [published by DesignIntelligence] and that the city and regional planning program had risen to 7th [according to Planetizen].  He then spoke about the many ways in which design contributed to his life and career.