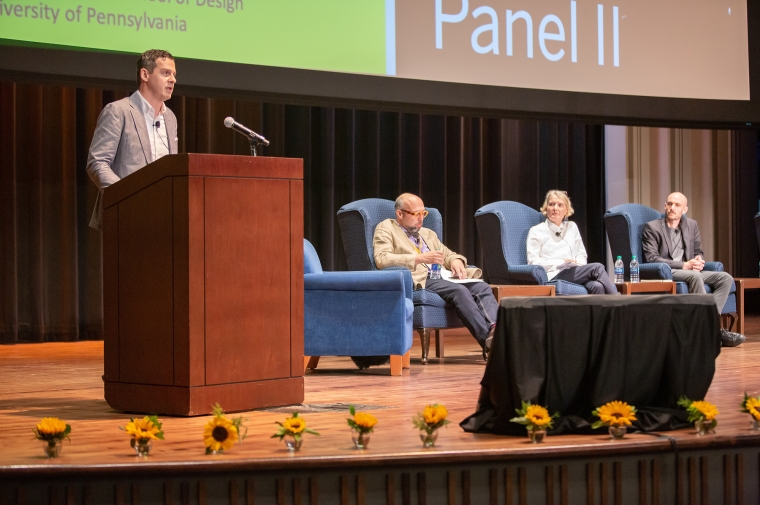 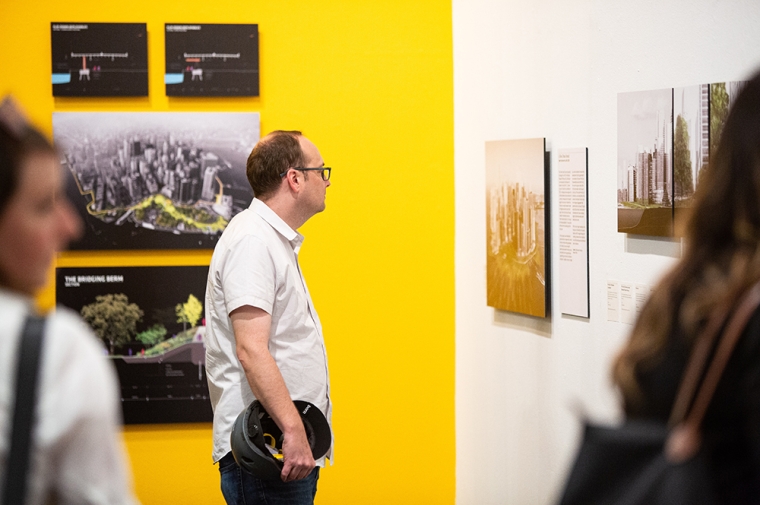 The conference coincided with the opening of three related exhibitions.

The conference coincided with the opening of three related exhibitions.

In 1969, Ian McHarg, the founder and former chair of the Department of Landscape Architecture at Penn, published a book called Design With Nature, which has been credited alongside Rachel Carson’s Silent Spring with christening the environmental movement of the 1970s and beyond. He wrote in an introduction to a second edition of the book, 25 years after its publication, that the title could be interpreted in multiple ways — descriptive of the method of ecological design and planning it put forth, on the one hand, or as an imperative to designers on the other. This year, on the 50th anniversary of its publication, the Weitzman School launched a new research and education center in his honor, the Ian L. McHarg Center for Urbanism and Ecology, along with a conference and a series of exhibitions meant to investigate McHarg’s legacy and propel it into the next half-century.

The conference, Design With Nature Now, was held over two days in June, and featured presentations from landscape architects, designers, authors and scholars from around the world. The exhibitions, featuring McHarg’s work as well as a series of influential design projects from the last fifty years, will be open throughout the summer in Meyerson Hall, the Arthur Ross Gallery in the Fisher Fine Arts Library, and the Kroiz Gallery in the Architectural Archives.

“The conference itself, the exhibits, the book, and the center, all of which are really tied to this 50th anniversary, they came together because we were interested in asking ourselves where landscape architecture and environmental planning have been over the past 50 years and where they might go,” says Billy Fleming, the Wilks Family Director of the McHarg Center. “And we felt compelled to ask it at Penn, where Ian built the landscape architecture department and where Design With Nature was conceived and written and released.”

The conference was designed to survey the massive expansion of the scale of landscape architectural practice since the publication of Design With Nature, Fleming says. And the exhibitions illustrate that expansion as well, featuring projects like the Great Green Wall, a 5,000-mile-long tree-planting project meant to guard against the southward expansion of the Sahara Desert in Africa, or the National Ecological Security Pattern Plan in China, an environmental plan at the scale of one of the largest countries on earth.

The McHarg Center’s public programming is meant to honor McHarg’s habit of inviting non-designers into the department — people like geographers, geologists and anthropologists — for cross-disciplinary education, Fleming says. The conference brought together a similarly broad collection of thinkers, and its opening night was kicked off with keynote speeches from a literary studies professor and an environmental scientist. Barbara Wilks (MLA'93), founder of W Architecture & Landscape Architecture LLC and a member of the McHarg Center advisory board, says that “the friction between these positions opens much place for the art of landscape architecture.”

“People’s ideas about nature are intertwined with their cultural mythologies, making it hard to separate fact from myth,” Wilks says. “By taking a ‘scientific approach,’ McHarg was able to situate culture, i.e. city infrastructure and settlements, in places advantageous in terms of the factual operations of natural systems. His many stories about cities poorly locating these improvements, like sewage treatment plants upstream from drinking water, always made you see the hilarious unintended consequences of our actions.”

The McHarg Center will continue its public programming with smaller events like Designing a Green New Deal, scheduled for September. The center is also planning to publish a book called Design with Nature Now featuring essays from many of the conference participants in the fall. And it will continue to draw scholars and practitioners from outside the design fields into conversations about addressing the urgent environmental and climate challenges of the day.

“Today, we need more stories separating myth from fact,” Wilks says. “Nature doesn’t need us to protect her — we need to understand her better to take care of ourselves as a species and as a society. The rules that govern our societies again need to be changed.”