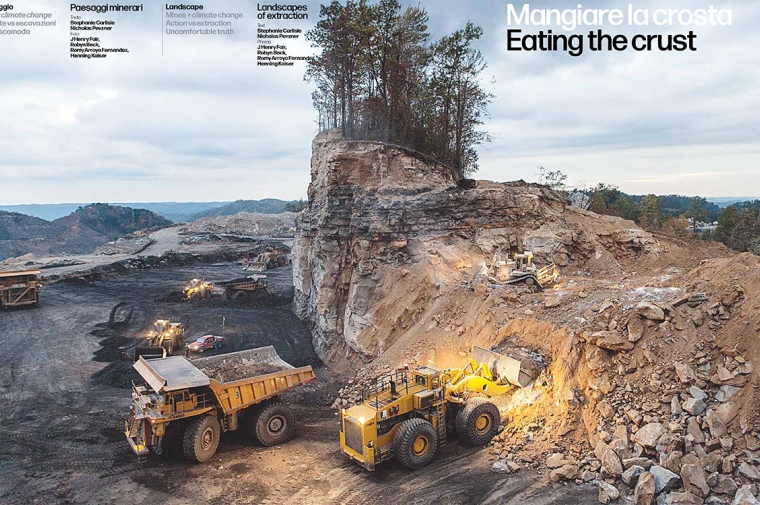 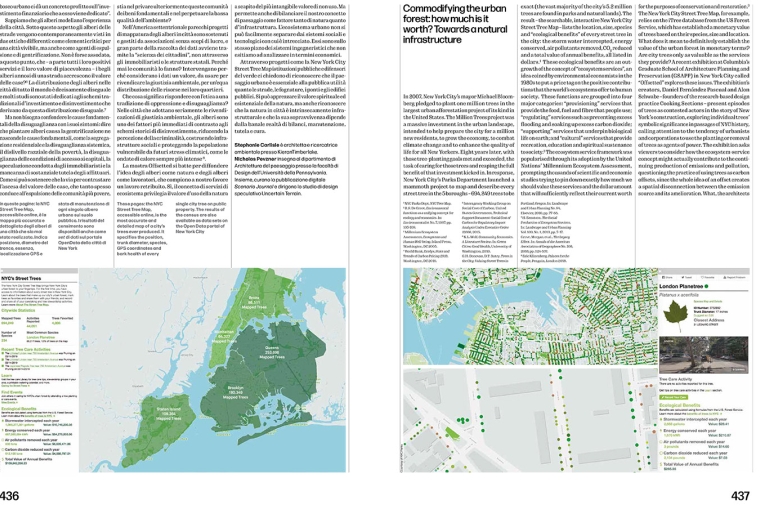 From “Landscapes of Extraction,” by Stepanie Carlisle and Nicholas Pevzner, Domus, No. 1033, March 2019

Extraction sustains our society. We dig and carve the landscape to construct the physical infrastructure of our towns and cities, but rarely pause to think about the origin of the gravel, concrete, steel, aluminium and plastics that comprise the built environment.

We rely on oil, gas and coal to power the technology in our lives, but are disconnected from the landscapes that must be exploited to yield that energy. We rely on rare earth metals to manufacture lifesaving medical devices, batteries and electronics without considering the political consequences of mine leachate on drinking water. The act of transforming raw materials into useful products is the foundation of economic development. Without extraction, urbanization is not possible.

The products and profits of extraction are all around us, but the process remains out of sight and far away. A vast system of railroads, canals, pipelines and ever-larger ocean-going vessels connects a global network of extraction and consumption.

Supported by economies of scale in both production and transport, low-value materials such as coal, crushed rock or sand – which historically tended to be extracted, processed and sold locally – now move long distances at little monetary cost. The origins of the thousands of raw materials and components that comprise a gadget or a building are increasingly dispersed across the world, hidden behind complex supply chains and nearly untraceable commodity markets. Multinational ownership of global mining companies further obfuscates territoriality, as extraction generates wealth bound for distant cities and raw materials bound for distant markets. Oil extraction from West Africa to the Gul of Mexico produces wealth in Houston, Texas. Gold mining in Uzbekistan supports a booming electronics industry in Shenzhen, China – and the millions of people whom it employs.

Chinese coal mining, in turn, underwrites the manufacturing of steel and aluminium used to construct cities around the world.

Landscapes of extraction are invisible territories, collateral to global capitalism and technological progress. Looking closely at such landscapes allows us to admire and judge both the technological innovation and advancement of some extraction processes, but also to call attention to the environmental degradation caused by others. It allows us to dissect and better understand the invisible – but no less real – social and political structures of labour, regulation, innovation, economics and power that also shape these territories.

While the politics and economics of the global market are abstract, extraction always happens in real landscapes, with physical consequences. In this way, extraction is always local.

From “Commodifying the Urban Forest: Towards a Natural Infrastructure,” by Stepanie Carlisle and Nicholas Pevzner, Domus, No. 1034, April 2019

In 2007, New York City’s mayor Michael Bloomberg pledged to plant one million trees in the largest urban afforestation project of its kind in the United States. The Million Trees project was a massive investment in the urban landscape, intended to help prepare the city for a million new residents, to grow the economy, to combat climate change and to enhance the quality of life for all New Yorkers. Eight years later, with those tree-planting goals met and exceeded, the task of caring for those trees and reaping the full benefit of that investment kicked in. In response, New York City’s Parks Department launched a mammoth project to map and describe every street tree in the 5 boroughs – 694,249 trees to be exact (the vast majority of the city’s 5.2 million trees are found in parks and natural lands). The result – the searchable, interactive New York City Street Tree Map – lists the location, size, species and “ecological benefits” of every street tree in the city: the storm water intercepted, energy conserved, air pollutants removed, CO2 reduced and a total value of annual benefits, all listed in dollars.

These ecological benefits are an outgrowth of the concept of “ecosystem services”, an idea coined by environmental economists in the 1980s to put a price tag on the positive contributions that the world’s ecosystems offer to human society. These functions are grouped into four major categories: “provisioning” services that provide the food, fuel and fibre that people use; “regulating” services such as preventing excess flooding and soaking up excess carbon dioxide; “supporting” services that underpin biological life on earth; and “cultural” services that provide recreation, education and spiritual sustenance to society. The ecosystem service framework was popularised through its adoption by the United Nations’ Millennium Ecosystem Assessment, prompting thousands of scientific and economic studies trying to pin down exactly how much we should value these services and the dollar amount that will sufficiently reflect their current worth for the purposes of conservation and restoration. The New York City Street Tree Map, for example, relies on the iTree database from the US Forest Service, which has established a monetary value of trees based on their species, size and location.

What does it mean to definitively establish the value of the urban forest in monetary terms? Are city trees only as valuable as the services they provide? A recent exhibition at Columbia’s Graduate School of Architecture Planning and Preservation (GSAPP) in New York City called “Offsetted” explores these issues. The exhibition’s creators, Daniel Fernández Pascual and Alon Schwabe – founders of the research-based design practice Cooking Sections – present episodes of trees as contested actors in the story of New York’s construction, exploring individual trees’ symbolic significance in passages of NYC history, calling attention to the tendency of urbanists and corporations to use the planting or removal of trees as agents of power. The exhibition asks viewers to consider how the ecosystem-service concept might actually contribute to the continuing production of emissions and pollution, questioning the practice of using trees as carbon offsets, since the whole idea of an offset creates a spatial disconnection between the emission source and its amelioration. What, the architects ask, are the rights of trees not to serve as carbon offsets but to simply “just be trees”? Is this a problem of creeping capitalism, ever-expanding to incorporate even nature into the framework of neoliberal market economics? The question is, in effect, the following: what do we lose when we commodify nature?