Made in Philly: At FDR Park, Weitzman Alums Bring Ecology and Recreation into Focus 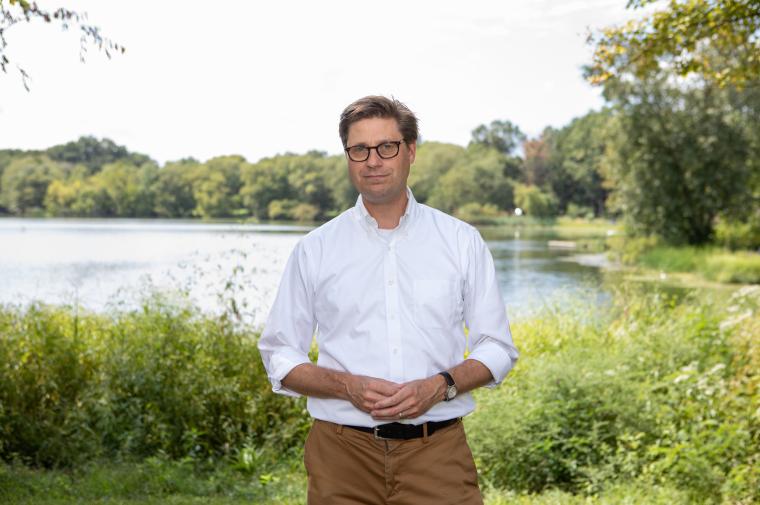 Charles Neer (MLA’99) at the north shoreline of Edgewood Lake. “For many, the experience at FDR Park starts with a trip to the water’s edge,” he says. “Improving the water quality within the park is of primary importance in order to activate the lake, improve habitat, and manage stormwater.” 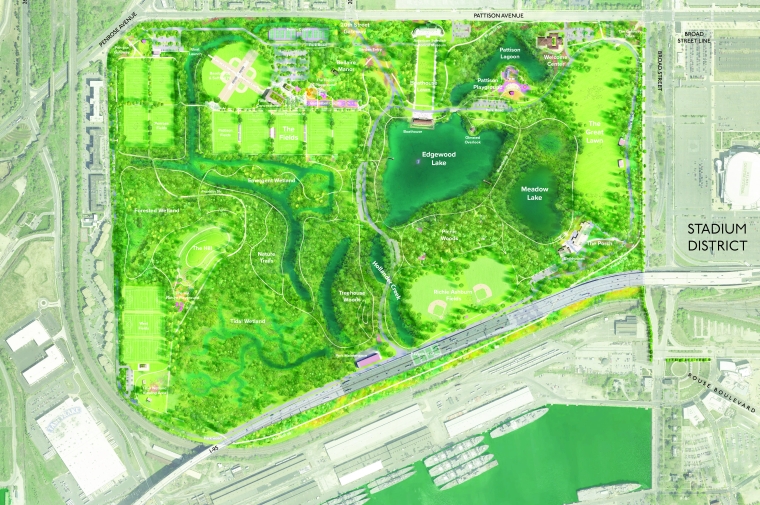 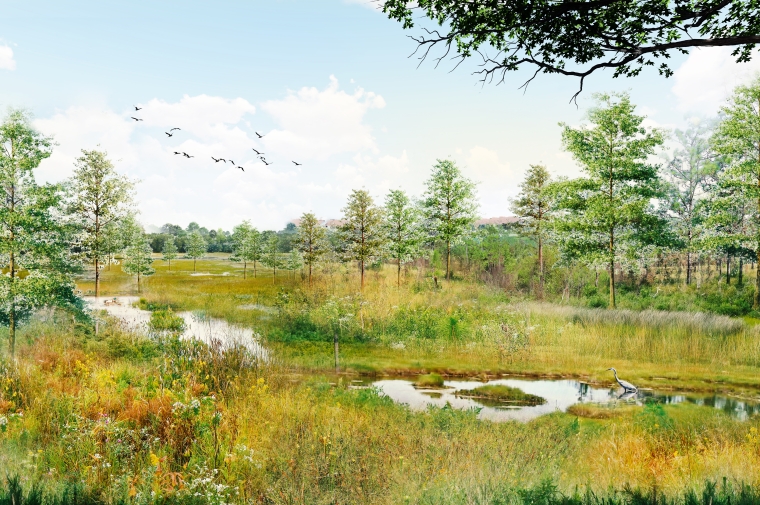 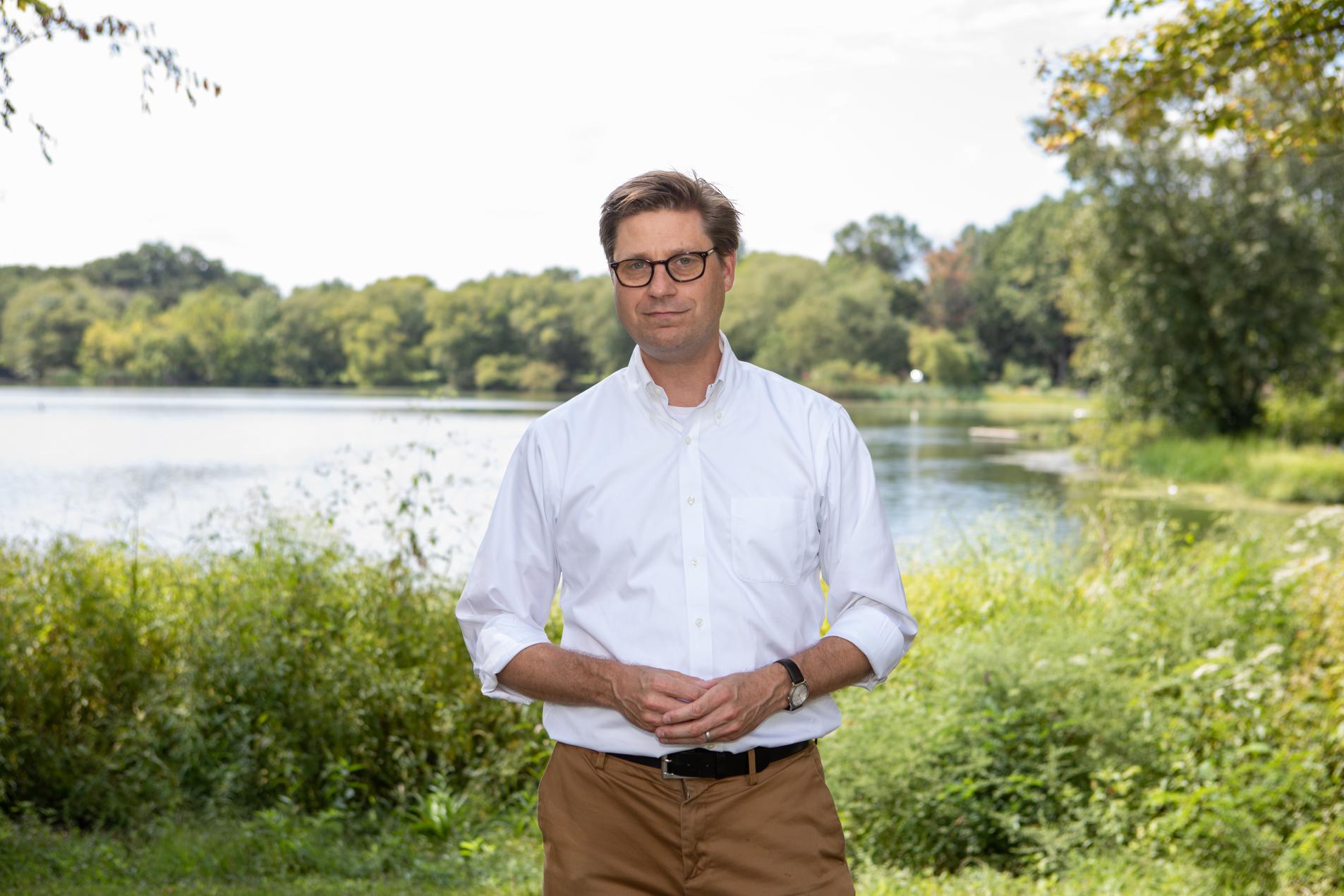 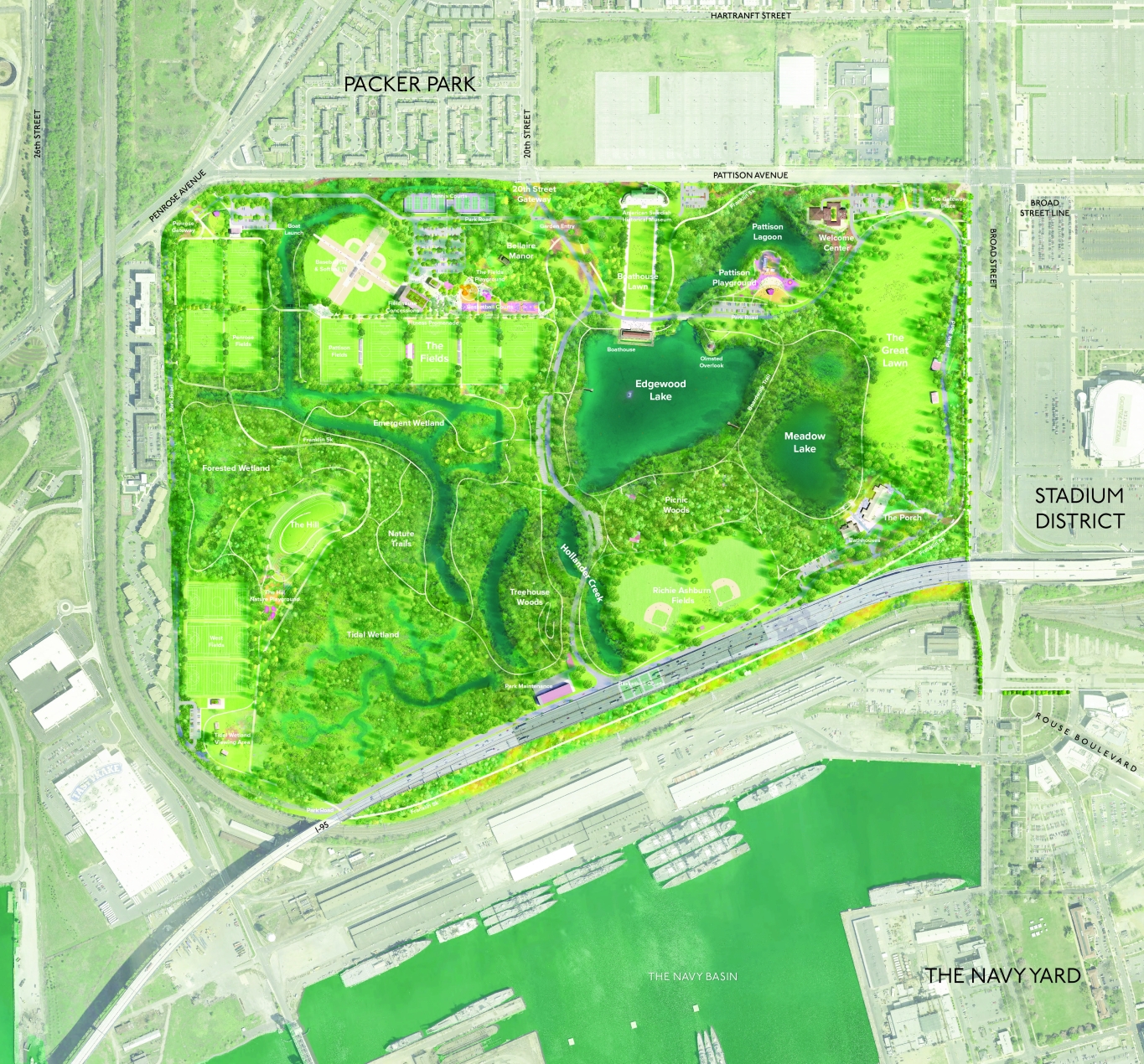 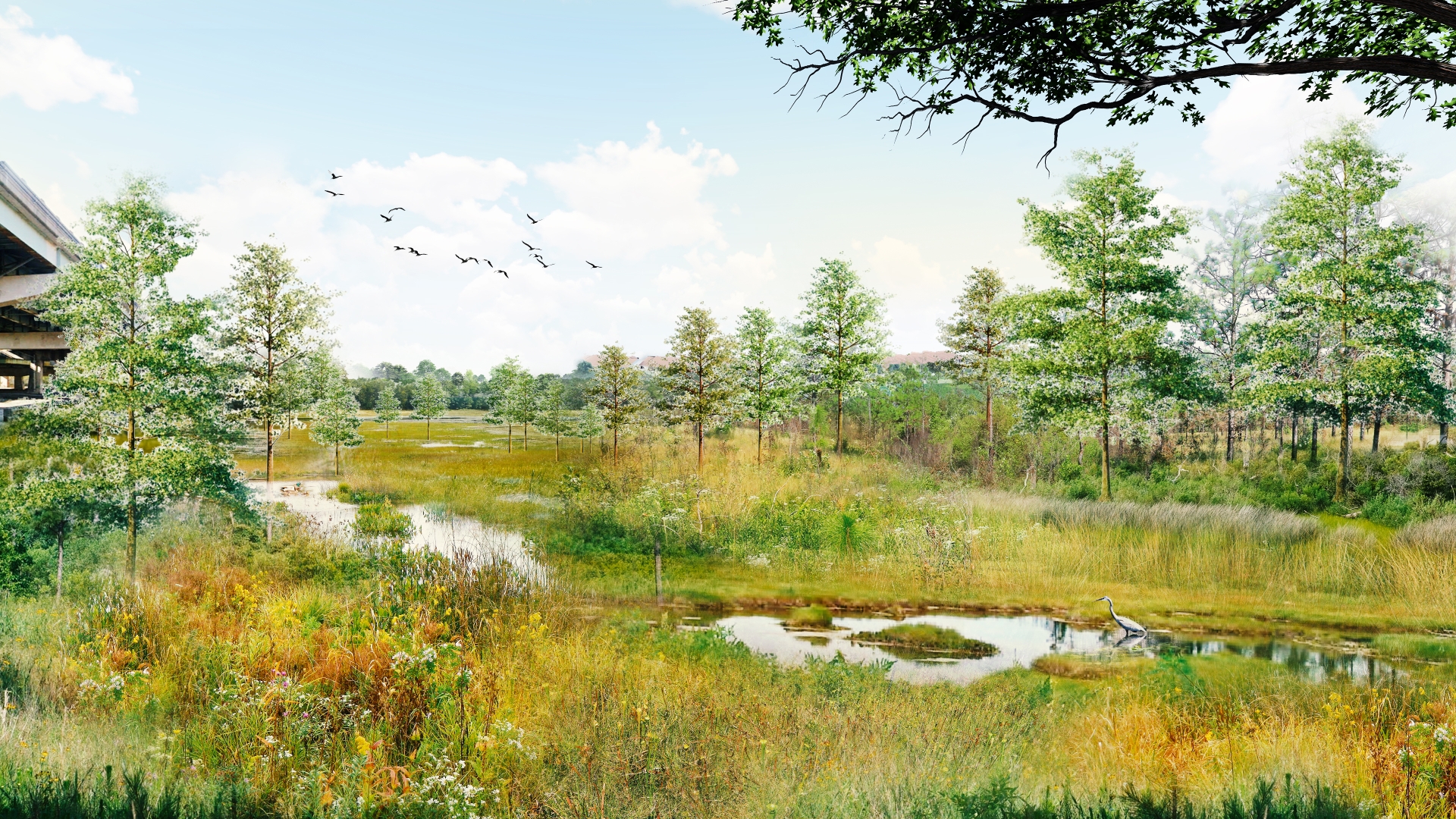 Charles Neer (MLA’99) at the north shoreline of Edgewood Lake. “For many, the experience at FDR Park starts with a trip to the water’s edge,” he says. “Improving the water quality within the park is of primary importance in order to activate the lake, improve habitat, and manage stormwater.”

Made in Philly is a series of reports exploring the role that Weitzman alums, students, and faculty members are playing in shaping and interpreting Philadelphia’s built environment.

When WRT was hired to lead a new master plan for FDR Park in South Philadelphia, it was 2017, the golf course hadn’t closed yet, and the COVID-19 pandemic was still three years away.

Along with a handful of international design firms, WRT had been shortlisted for the project by the Fairmount Park Conservancy, the group leading the effort to rethink the park, which was first designed by the Olmsted Brothers, the firm led by Frederick Law Olmsted’s sons, in the 1910s. The firms were asked what unique advantages they would bring to the project. Charles Neer (MLA’99), a senior associate at WRT and board member at Weitzman’s Ian L. McHarg Center for Urbanism and Ecology, remembers looking out across the city from the 28th-floor window of his Center City office building and taking in the 348 acres of green at its southwestern edge. He could get there on the subway in 20 minutes. That was an advantage, he thought.

Five years later, WRT is still working closely with the Fairmount Park Conservancy and Philadelphia Parks and Recreation on an evolving park plan, while some of its landscape architecture and architectural design work is beginning to take physical shape in the park.

The master plan, now referred to as the FDR Park Plan, was published in 2019, and called for a sweeping reconsideration of how the park’s various recreational uses and ecological functions could be balanced. It suggested an “urban edge” for active uses with various sports and recreation spaces and an “ecological core” with newly restored wetlands, lakes and trails. Neer says an overarching goal of the plan was to promote better hydrology in the park, which regularly floods.

“This ecological core is designed to be the wet sponge of the park,” he says. “It represents an intentional expansion of the lowest lying areas within the park. And it’s these interconnected landscapes where we focus on habitat continuity and expanding the wetlands and riparian corridors on the site. We focus on resilience by allowing and expecting these places to flood.”

FDR Park has always attracted visitors with varied interests, from people playing tennis, baseball and soccer, to skateboarders, picnickers, anglers, birdwatchers, bikers and runners. Just before the pandemic, the city shut down a large municipal golf course in the western half of the park, and as more people began socializing outside, the overgrown golf course took on a new identity as a kind of nature park, referred to as The Meadows.

“It’s a neighborhood park for South Philadelphians, a regional amenity, and an international draw for skateboarders, people visiting the American Swedish Historical Museum, and thousands of migrating birds that make a temporary home in its forests and wetlands.”

The park plan had called for much of that section of the park to be dedicated to active uses like mixed-use (or football/soccer) fields, with natural features clustered in the middle—though it was still to be threaded with trails and restored creeks. Some changes have occurred since 2019, including the removal from the plan of a golf driving range. Now, about 60% of the park is slated to be part of the ecological core, up from roughly half in the 2019 plan, Neer says.

“The park plan is a plan. It is a blueprint and it’s a framework for development. It’s subject to potential change.”

Work has already started on a plan to reestablish wetland areas in the southwest corner of the park, a mitigation project led by Philadelphia International Airport. Fill that’s removed from that area will be tested, and healthy portions of the soil will be used throughout the western portion of the park to elevate athletic fields and keep them from flooding.

Work is starting this year, too, on a rehabilitated welcome center and a new nature playground in the northeastern quadrant of the park. WRT completed the landscape architecture design for the playground and the architectural designs for the welcome center. In addition to Neer, the WRT team that worked on the park plan, the playground, and the welcome center included Weitzman alums Keiko Tsuruta Cramer (MLA’03), who is principal-in-charge, Erin Roark (MArch’98), Mary Morton (MCP’12), Ziwei Wang (MLA’16), Jingran Yu (MLA’15), David Ostrich (MLA’87), Hyun-Jung Kim (MLA’02), Zuzanna Drozdz (MLA’20), and Krista Reimer (MLA’19).

FDR is one of the biggest parks in Philadelphia, and it functions at multiple scales, Neer says. It’s a neighborhood park for South Philadelphians, a regional amenity, and an international draw for skateboarders, people visiting the American Swedish Historical Museum, and thousands of migrating birds that make a temporary home in its forests and wetlands. The plan has to balance all those functions, says Neer, who has made the trip to the park four times in the last two weeks. But FDR Park has space for them all.

“The whole point of this plan is to find the highest and best use and programming for the park,” Neer says. “This is the classic case of having 15 pounds of potatoes and you’re trying to put them into a five-pound bag. We are trying to maximize the ecological, social and economic benefits for everything that we do here.”