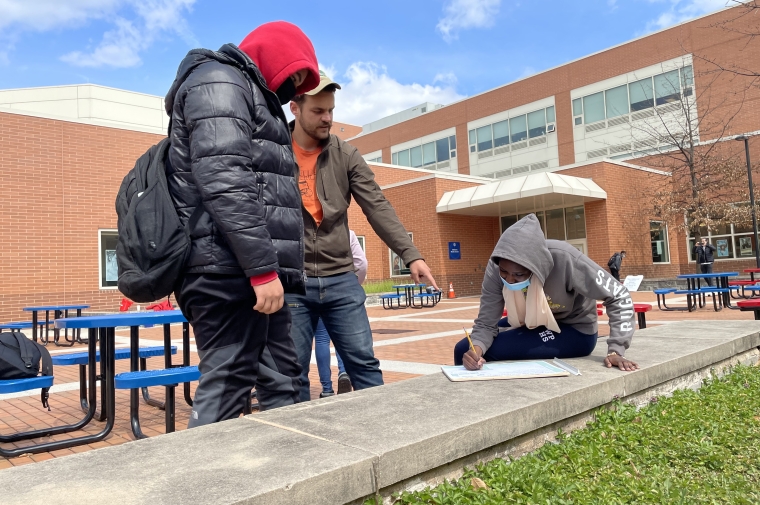 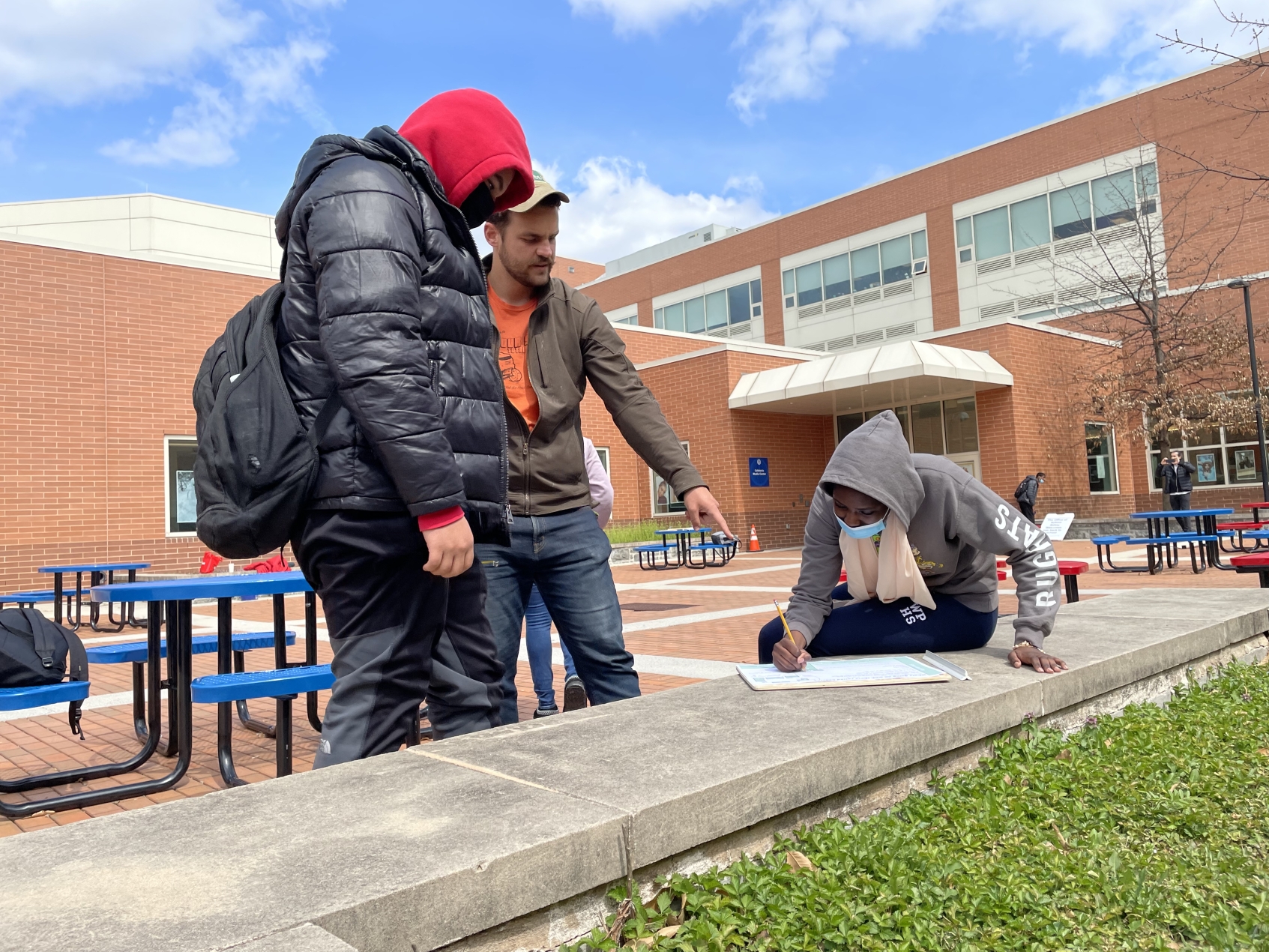 What counts as public infrastructure in the United States? Based on the $65 billion Infrastructure Investment and Jobs Act, signed into law by President Biden last fall, it’s roads, bridges, public transit, and water and power systems—and not housing, in-home care, or public schools.

But, over the next three years, a studio organized by PennPraxis through a new interdisciplinary initiative at Weitzman aims to elevate and reimagine the role of public-school buildings both as community infrastructure and as city-wide equity infrastructure, while making concrete improvements to West Philadelphia schools.

The studio is part of a new initiative called Studio+ that taps the skills and experience of all five graduate departments at Weitzman. It’s the first studio in the School’s history to systematically bring together faculty members and students in architecture, landscape architecture, historic preservation, fine arts, and city planning, and it’s envisioned as a permanent feature of the Weitzman curriculum. This year, it was organized as a relay, with faculty in architecture, fine arts, and landscape architecture leading a spring studio that builds on a fall studio led by preservation and planning faculty.

This spring, Studio+ is working with West Philadelphia High School in a series of collaborations with students and faculty there that are intended to lead to built interventions this summer, with more to follow over the next 2 years. Some of the early ideas that West students and teachers are excited about include onsite gardens, outdoor performance spaces and classrooms and improvements to the school’s outdoor furniture. But as important as the built work is, the Studio+ team is invested in laying a foundation of trust that’s seen as essential for longer-term collaboration with the school. That means acknowledging the University’s complex relationship with West Philadelphia neighborhoods over the years, including a legacy of gentrification and over-policing, says Eduardo Rega Calvo, a lecturer in Architecture who is co-leading the studio this semester.

“It is the goal to develop design processes and design proposals that get implemented and that have an impact on the material world,” Rega says. “But this is going to be a design-build intervention that acknowledges all of the injustices and relationships with West Philadelphia, and that positions itself with the movements of resistance.”

“This is a project that identifies itself with a struggle against gentrification” he adds.

In the fall of 2021, Rodriguez led a City and Regional Planning seminar that focused on how investments in public schools could promote social, economic, and environmental equity. The seminar was offered in collaboration with Ariel Bierbaum, an assistant professor in the University of Maryland School of Architecture, Planning and Preservation. It built on research that Rodriguez completed last fall concerning a Green New Deal for Public Schools, which was translated into legislation that was later introduced by Congressman Jamaal Bowman of New York. The fall seminar, which overlapped with Congressional negotiations over the bipartisan infrastructure package, encouraged Weitzman students to think through how infrastructure is defined and limited in the US, and how public schools are often underfunded and poorly maintained. Studio+ is translating that thinking into tangible projects, Rodriguez says.

“What we’re trying to do is propose new interventions to the problem of school facilities in Philadelphia,” Rodriguez says. “One of the limits of a planning studio is that it’s focused on defining a problem. In a design-based studio, they’re proposing projects that they can actually implement.”

Over the next 2 years, the Studio+ team hopes to design new spaces, amenities, and improvements to indoor learning environments for West Philadelphia High School, Sayre High School, and Robeson High School. The three-year commitment is meant to help establish trust and continuity in the collaboration with school leaders and education activists, and the active planning and engagement of the Netter Center for Community Partnerships at Penn, a key thought and implementation partner of PennPraxis in Studio+. It gives Weitzman students a longer timeline to think about the impact of their work as well.

“Usually, one semester is too short to go in and gain enough money and momentum to realize design ideas, so it’s exciting that this three-year process is happening,” says Jamaica Reese-Julien, a third-year student pursuing dual master’s degrees in architecture and city planning.

Students from various departments are working together to apply their own skills and backgrounds while learning to work outside of their comfort zones.

Disciplinary boundaries have tended to break down in the studio, says Reese-Julien, who also enrolled in the planning seminar that set the stage for Studio+ last fall. Students from various departments are working together to solve the same problems and design the same products, apply their own skills and backgrounds while learning to work outside of their comfort zones. It’s the first time Reese-Julien has enrolled in a multi-disciplinary studio, but it’s an approach to learning that drew her to Weitzman in the first place, she says.

“The scale at which people design and look at things is really different across disciplines, and it’s nice to be able to design with people who are thinking at a different scale than you might be,” she says.

For Weitzman students, the best part of the collaborative studio might be the opportunity to critique and complement each other’s work, says Abdallah Tabet (MLA’07), a lecturer in the Department of Landscape Architecture and associate at OLIN in Philadelphia, who is co-leading the studio this semester.

“Whenever you have a setup like this, students become contributors to each other’s education,” Tabet says.

“It’s a really enriching way of sharing skills and backgrounds,” she says. “You start to see the parts of your design education that are different from your classmates’.”

As for the specific designs that students are working on, Reese-Julien says there’s a lot of interest in creating a garden in the schoolyard at West. At Sayre, there are conversations about building on previous design and planning for stormwater management on school campuses that one of the Weitzman students, Corey Wills (MCP’22), did as part of the EPA’s Campus RainWorks Challenge. [Other students working on the Sayre project include Jackson Plumlee (MLA’23, MCP’23), and Mrinalini Verma (MLA’21, MSD-EBD’21)]. The student participants from West, many of whom are enrolled in a Career and Technical Education program (CTE) in architectural design, are interested in improving social spaces on the campus for people who live in the neighborhood. They also have a certain degree of skepticism about the prospect of real improvements, says Daniel Flinchbaugh, a third-year student in the Department of Landscape Architecture.

“Whenever we talk about any of this to high school students, they say, ‘It’s never going to happen.’ So it’s going to take a lot of showing up again and again,” Flinchbaugh says.

Part of the division of labor for Weitzman students in Studio+ is playing to individual strengths, regardless of disciplinary backgrounds. For Flinchbaugh, who says he has “a lot of energy and can relate to students pretty well,” that means going to West Philadelphia High regularly to meet and talk with students.

“I want people to recognize me in the halls and say, ‘Hey, he’s actually coming back,” Flinchbaugh says.

The Studio+ students recently completed a mid-semester review, where they presented their planning research and early design work for the facility improvements. They’re working toward final designs for the end-of-semester review. And over the summer, PennPraxis will hire a group of Design Fellows, both from Weitzman and from West Philadelphia High School, to construct projects and plant on the school grounds. The built work will plant a flag for the studio’s longer-term partnership with the community, and give students a new amenity to learn from and use.

“You can take pallet wood and turn it into planters, and with just a few seeds you can have food for a party,” Flinchbaugh says. “That’s the dream: To take what you have and make bounty with it.”