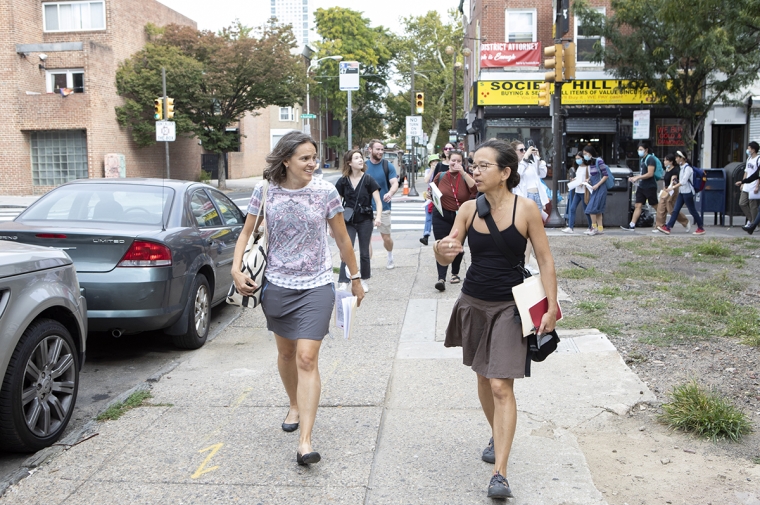 In teaching Weitzman students about the history of Philadelphia neighborhoods like Society Hill and Queen Village, where buildings date back to the 18th century, Francesca Russello Ammon (pictured here left with Kecia Fong, co-instructor for their Historic Preservation Documentation course) leads walking tours of the area.

In teaching Weitzman students about the history of Philadelphia neighborhoods like Society Hill and Queen Village, where buildings date back to the 18th century, Francesca Russello Ammon (pictured here left with Kecia Fong, co-instructor for their Historic Preservation Documentation course) leads walking tours of the area.

The Department of City and Regional Planning at the Weitzman School recently announced that it is launching an Initiative in the History of the Built Environment to organize and amplify existing work at Penn, promote new scholarship, and support doctoral students committed to studying history in the fields of city planning, preservation, and design.

The initiative, led by Associate Professor of City and Regional Planning and Historic Preservation Francesca Russello Ammon, is aimed at making Penn “the premier place to study urban, planning, landscape, and architectural history within its social, political, and cultural contexts,” according to the written proposal. As part of the initiative, the Department of City and Regional Planning will hire an assistant or associate professor in the History of the Built Environment, to begin in July 2022. The initiative will also support four doctoral fellows in the History of the Built Environment for five years each, over a total of 10 years. And it includes funding for faculty in other schools and departments to develop courses supporting those students.

Doctoral fellows will participate in seminars led by faculty across departments within the Weitzman School, as well as methodological and thematic courses in departments including History in the School of Arts and Sciences. New yearly foundation courses will be developed in the Department of City and Regional Planning, along with special topics seminars to be developed by the new faculty member in partnership with current faculty. Ammon says the 10-year initiative is an incubation phase for what should become a more permanent course of study within the School. Fellows who complete the program will have unique qualifications to teach in both design schools and interdisciplinary humanities programs.

“The city planning program has always had a strong emphasis in the area of history, but it’s not something we’ve actively nurtured or showcased,” Ammon says. “As a design school as well, we have more faculty who have expertise in history than at most of our peer schools, and I think we can do a lot more to develop that—to the benefit of our students and scholarship.”

The new professor will join the Graduate Group in City and Regional Planning, associated with the doctoral concentration in the History and Culture of Cities. If the candidate specializes in preservation, they may also be associated with the master’s-level concentration in Public History of the Built Environment in the Graduate Program in Historic Preservation. Weitzman’s existing historic preservation master’s degree organizes its practice-oriented education in public history around the tools, sources, and subjects of the built environment. The new PhD program will take a comparable approach to the study of history, with both public and scholarly career paths in mind.

A search committee led by Ammon is currently seeking a professor with research interests in the built environment through the lens of urban history. Areas of specialization may include global or transnational urban history; the histories of race, ethnicity, and colonialism; the histories of gender and sexuality; or urban heritage. Along with the new doctoral fellows, the professor will promote a renewed focus at Penn on the historical development of the built environment, considered more broadly than in any individual design discipline.

“When one thinks about the history of planning or the history of architecture, there’s a strand of scholarship that privileges the people conventionally seen as experts—often white men who popularized the big ideas and had, perhaps, great municipal power,” Ammon says. Through the new initiative, scholars may turn more focus on the broad populations of urban actors who have “built, lived in and remade the built environment through their own experience. The result will be a more complex and inclusive understanding of the history of the material world around us.”

Eugénie Birch, the Lawrence C. Nussdorf Professor of Urban Research & Education and chair of the Graduate Group in City and Regional Planning, says that research in the history of the built environment was owned for the first half of the century by scholars of architecture. After World War II, city planning was increasingly integrated with social sciences, and historical research has shifted between schools and disciplines based on individual scholars’ interests, Birch says. Two planning-oriented organizations started in the 1980s and 1990s, the Society for American City and Regional Planning History and the International Planning History Society, have fostered humanistic scholarship in the field, but “the thought of having a full instructional theme within a doctoral program has not happened,” Birch says.

Research in the history of the built environment can go in infinite directions, Birch says. For example, Ammon, who has served on the board of the Society for American City and Regional Planning History, wrote a cultural history of the bulldozer in the United States in the era of urban redevelopment after World War II. Ammon is currently at work on two digital humanities projects: using street-view photographs to understand vernacular redevelopment on Sunset Boulevard in Los Angeles, and marshaling a range of oral history and documentary sources to uncover the legacy of preservation-based urban renewal in Philadelphia’s Society Hill neighborhood. The History of the Built Environment initiative would support more rigorous and sustained research in the field, she says. It also builds on the work of other Weitzman School programs that support new scholarship and advocacy in specific areas, including The Ian L. McHarg Center for Urbanism and Ecology, launched in 2019, and the Center for the Preservation of Civil Rights Sites, which recently announced a search for a new faculty member who will serve as a permanent director.

The initiative is also being offered at a time when the broader culture is undergoing a deeper exploration of how history is incorporated into contemporary life, Ammon says. The Black Lives Matter protests of the summer of 2020 highlighted the ways that race is inscribed in the urban landscape, from the siting of highways to the long-term and uneven impacts of redlining. COVID-19 has awakened interest in understanding how diseases have transformed communities and space. And the national conversation surrounding controversial monuments shows how historical memory has been etched into the built environment. “A deep understanding of history can and should inform all of these contemporary debates,” she says, “and this initiative is one avenue for doing so.”

“For decades, Penn and Weitzman have trained some of the most influential designers in the world,” Ammon says. “I’d like us also to become known as the best place for planners, preservationists, architects, and landscape architects to study history.”