The report was supplemented with a recent panel discussion at the Pennsylvania Academy of the Fine Arts, called Remaking Civic Infrastructure: A Discussion of How Cities Are Reinvesting in Libraries, Parks, Rec Centers, and the Public Realm. The panelists were Maurice Cox, planning director for the City of Detroit, Ryan Gravel, creator of the Atlanta Beltline, and Lynne Sagalyn, Professor of Real Estate in the Columbia Business School. The panel was moderated by PennPraxis Executive Director Randall Mason and its senior researcher, Elizabeth Greenspan. Greenspan and Mason are co-authors of the report, Civic Infrastructure: A Model for Civic Asset Reinvestment.

Mason began the discussion with a rough definition of terms: civic infrastructure is both the material stuff of the public realm—parks and buildings and plazas—as well as the functions and public rituals that those places enable, he said. The reason why civic infrastructure has become a major concern at this moment in history is that cities have seen the power of big public investments, like Dilworth Plaza in Philadelphia or the High Line in New York, in revitalizing downtown areas. The challenge now, Mason said, is to “make good on our aspirations for equity and access” by bringing those types of investments to neighborhoods outside the downtown core, where lower-income communities have fewer amenities and poorer services.

“It’s about, in a certain sense, democratizing the successes of the last generation,” Mason said.

Projects that embody the aspirations of civic infrastructure include the red stairs in Times Square, where people congregate “to see and be seen,” said Lynn Sagalyn. But those aspirations also fuel less grandiose gestures, like pocket parks and “quieted streets” in Manhattan, redesigned to make more room for bikers and pedestrians, she said.

“We’re not building anything, and yet we are transforming everything.”

Ryan Gravel discussed the progress of the Atlanta BeltLine, a 22-mile circuit of former railroad lines that’s being converted into a trail and a streetcar line. Gravel, who developed the idea for the BeltLine as a master’s student at Georgia Tech, said the project gained steam with organic, grassroots support. Communities who have historically been distrustful of major urban projects, or fearful of displacement or gentrification, were able to judge the project on its merits, partially because it didn’t come from City Hall or developers, Gravel said. Once elected officials realized the BeltLine had the backing of neighborhood groups, advocacy organizations, and developers, they were lining up to support it, he said.

Maurice Cox, who served previously as a city council member and mayor in Charlottesville, Virginia, said that public investment has to be a component of every development project in Detroit. However, focusing attention on one or two amenities doesn’t make sense in the city, he said, because neighborhoods continue to decline. Cox is leading a plan to transform one small section of the city, which has lost more than half its population, by converting hundreds of vacant lots into gardens, park space, and greenways while rehabbing 115 homes, all without displacing a single family.

“We’re not building anything, and yet we are transforming everything,” Cox said, of the Fitzgerald Revitalization Project. “For neighborhoods in our cities that have no market pressures whatsoever, it’s incumbent upon us to figure out novel, innovative ways to regenerate those things.”

The panelists agreed that when public-private partnerships are formed, it’s the responsibility of the public partners to set “the rules of engagement.” As Philadelphia’s leaders grapple over the structure of the Rebuild initiative, PennPraxis hopes its research can provide all stakeholders with valuable and inspirational insight on the best practices of civic reinvestment. Read its report here. 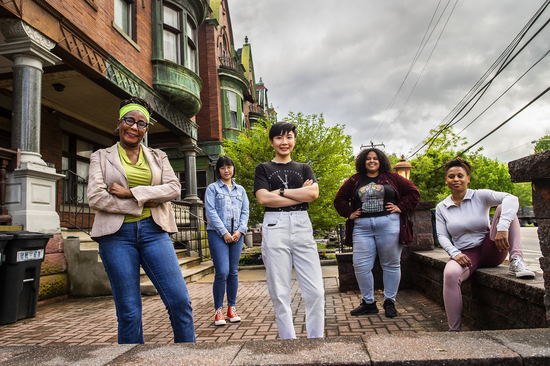 ‘Historic Preservation: An American Perspective on a Professional Discipline’