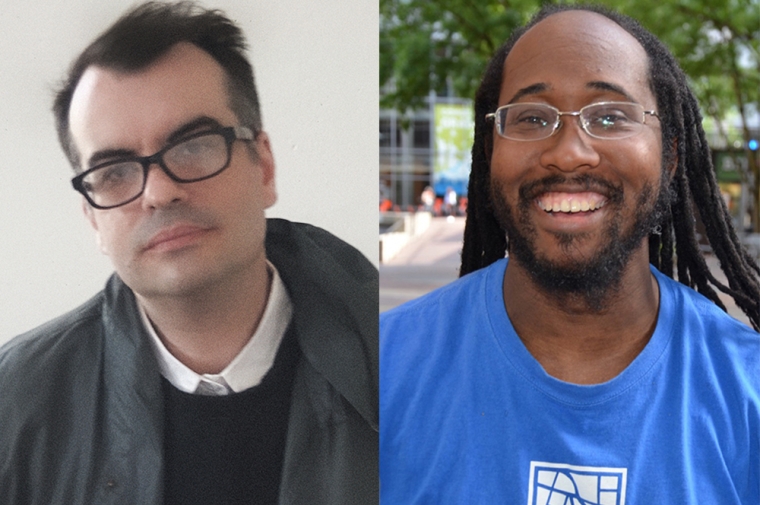 Dean Steiner today announced two upcoming appointments to the standing faculty. Robert Gerard Pietrusko is expected to join the Department of Landscape Architecture as an associate professor on the tenure track beginning January 1, 2022, and Jamaal Green the Department of City and Regional Planning as an assistant professor on the tenure track beginning on July 1, 2022.

Robert Gerard Pietrusko comes to Penn after a decade in the department of landscape architecture at Harvard. His research and teaching focus on the history and speculative design potential of environmental media. His design work, which is conducted under the name of his studio, WARNING OFFICE, is part of the permanent collection of the Foundation Cartier pour l’art contemporain in Paris and has been exhibited in more than 15 countries at venues such The Museum of Modern Art (MoMA), Palais de Tokyo, ZKM Center for Art & Media, and the Venice Architecture Biennale, among others, and recordings of his sound art have been released by famed experimental labels, ROOM40 and LINE. For the last three years, Robert has been a visiting faculty member at the Strelka Institute for Media, Architecture, and Design in Moscow, and he was recently awarded the 2021 Garden Club of America Rome Prize Fellowship for Landscape Architecture. Prior to teaching, Robert was a designer with Diller Scofidio + Renfro in New York, and held research positions at Parsons Institute for Information Mapping at the New School, and at Columbia University’s Spatial Information Design Lab. Robert earned a Bachelor of Music in Music Synthesis from the Berklee College of Music, a Master of Science in Electrical Engineering from Villanova University, and a Master of Architecture from the Graduate School of Design at Harvard University.

Jamaal Green joined Weitzman as a postdoctoral fellow in 2020 and will continue in that role through the upcoming academic year. He has taught Land Use & Environmental Modeling, and this fall he will be teaching Modeling Geographic Objects. His research deals with how spatial policy decisions exacerbate, or alleviate, social inequality, with a particular focus on urban economic restructuring and labor market change. As an economic development planner, he looks specifically at ongoing economic restructuring and the spatial implications of such restructuring on industrial location, labor market change, and social inequality. He uses a range of spatial analytic techniques to explore these dynamics across a variety of topic areas while remaining centered on the issues of spatial inequality and planning’s role in structuring these relations. Before coming to Penn, Jamaal worked for the State of Oregon Department of Human Services, where he helped develop a spatial risk analysis for child abuse and maltreatment. Jamaal earned his Master of City and Regional Planning from the University of North Carolina at Chapel Hill, and his PhD in Urban Studies from Portland State University.

Faculty appointments are formally reviewed by the Provost and the Board of Trustees in the fall.