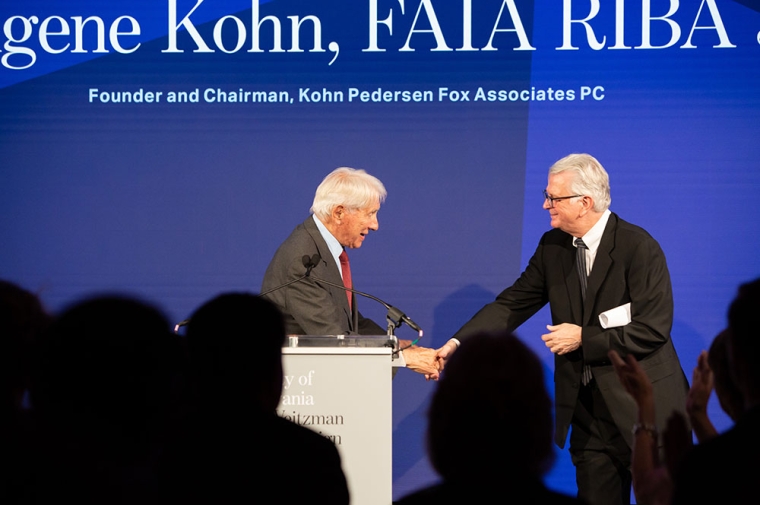 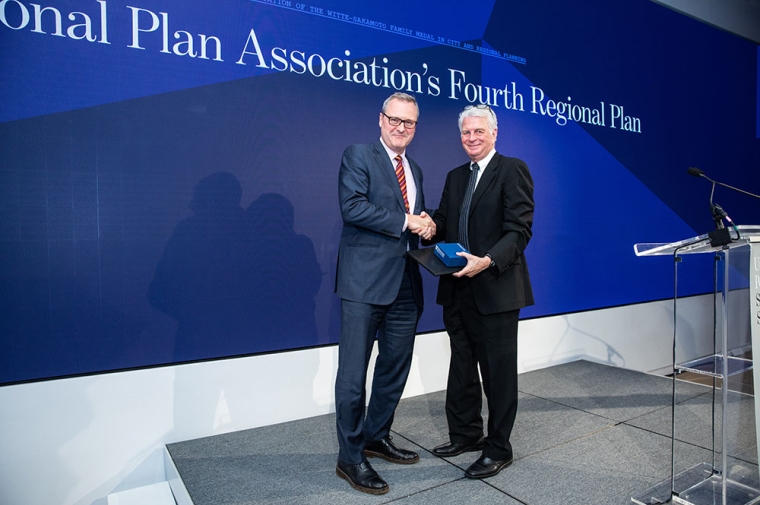 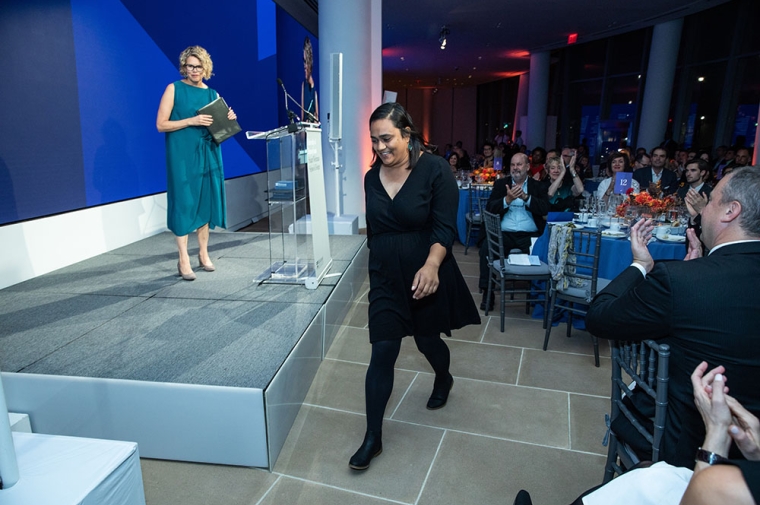 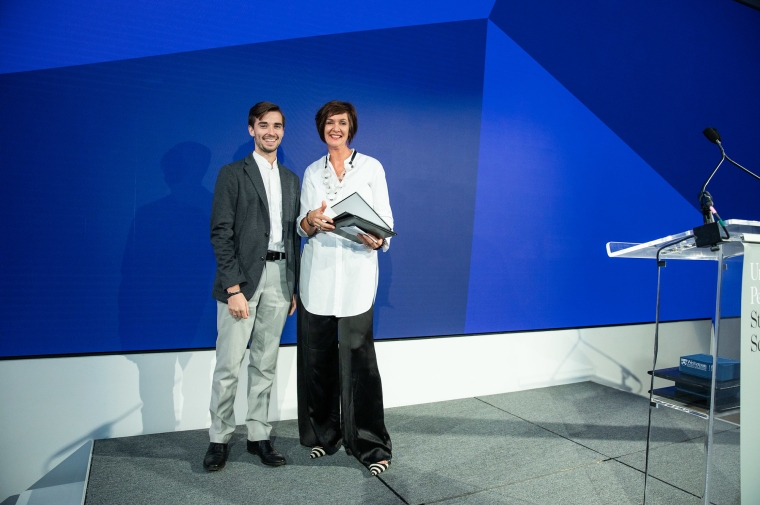 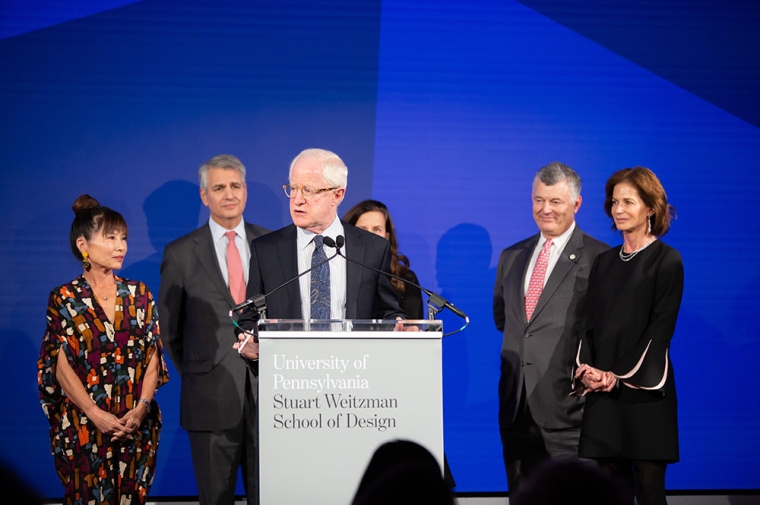 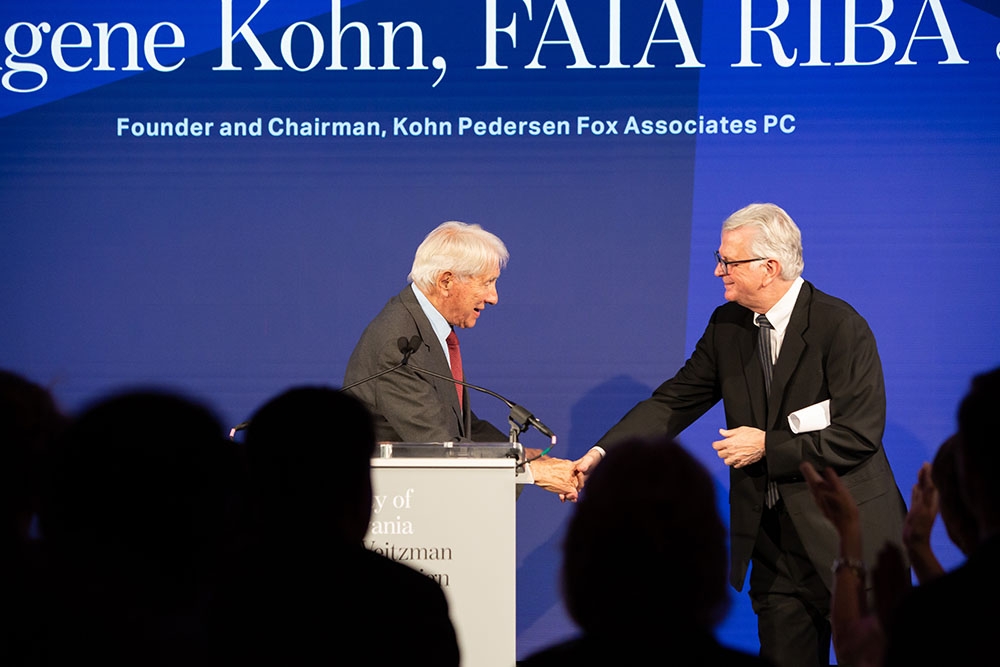 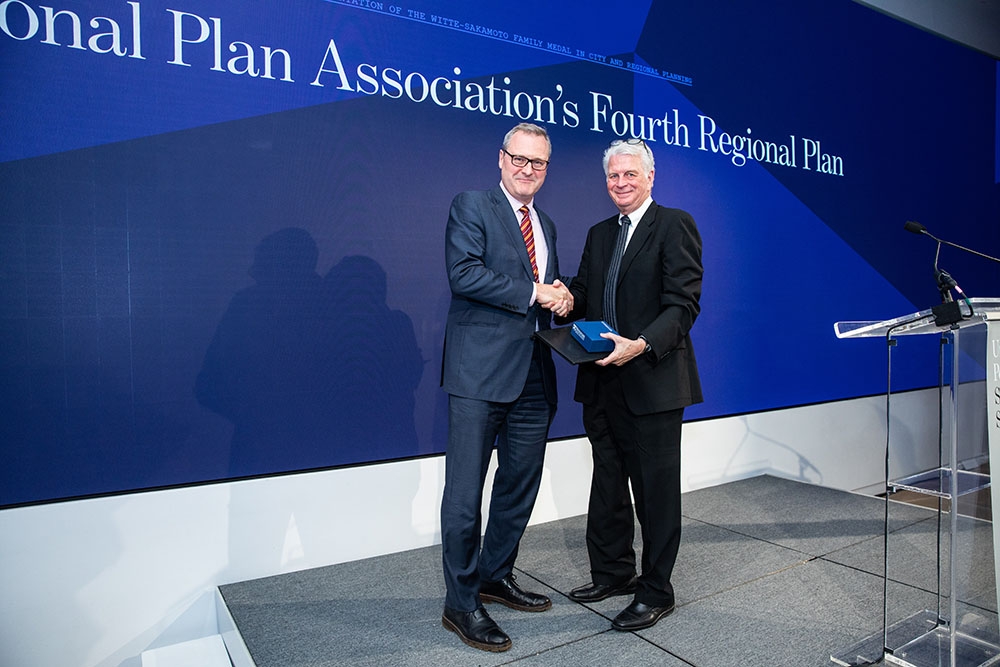 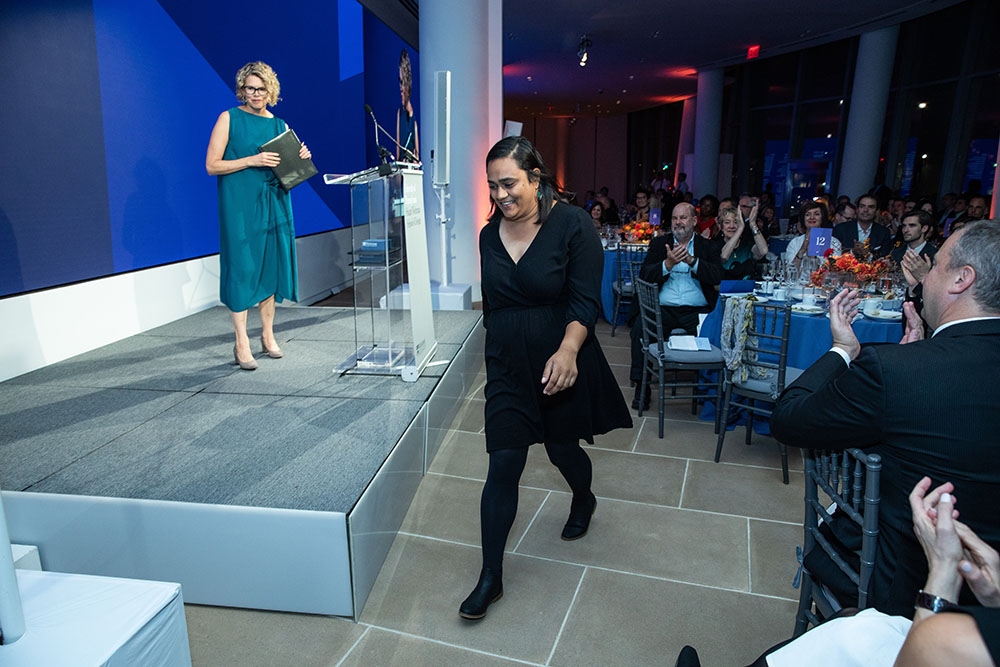 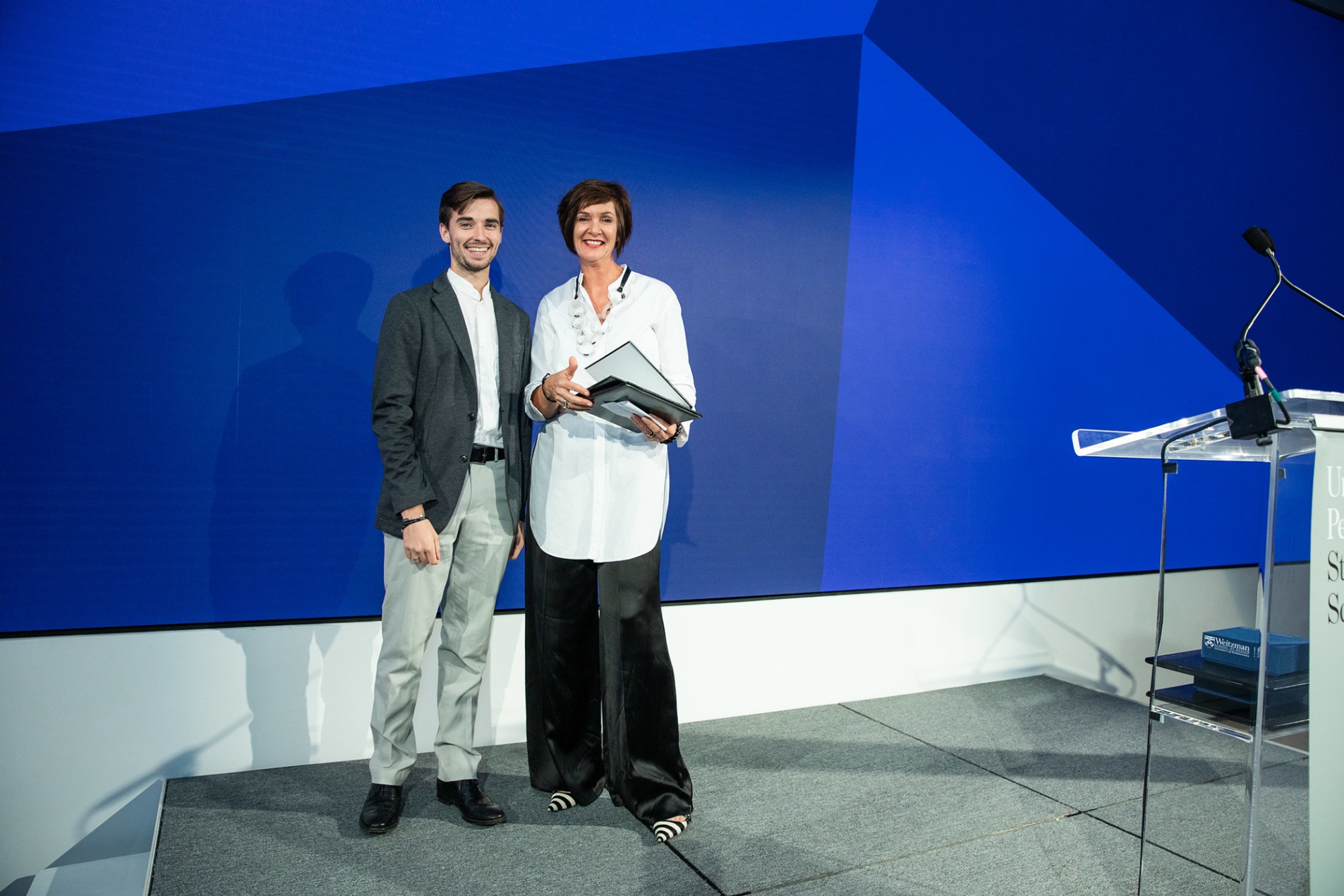 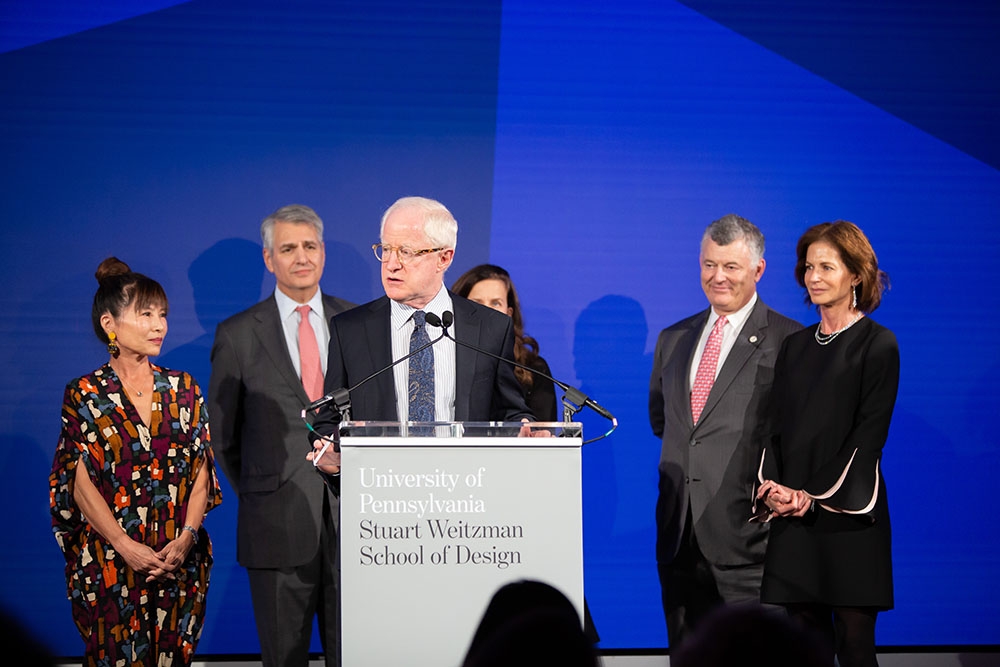 Seven decades after he first came to Penn, A. Eugene Kohn (BArch’53, MArch’57) stood before a group of Weitzman faculty, alumni, donors, and students last week and told a story about his mother. When he was young, Kohn told the audience, she made a living as a dressmaker. But she refused to sell a dress to a customer if it wasn’t flattering, because eventually, the customer would discover it didn’t look good. That would be bad for the buyer, and for the reputation of the dressmaker.

“It taught me something about ethics, and about moral leadership,” Kohn said.

Kohn was reflecting on his formative years during his remarks at the Stuart Weitzman School of Design Awards, where he accepted the 2019 Kanter Tritsch Medal for Excellence in Architecture and Environmental Design, given in recognition of his years leading with the international architecture firm Kohn Pedersen Fox (KPF), which he co-founded in 1976. Images of KPF’s iconic towers in Shanghai, Tokyo, New York and across the world flashed on a screen behind him as he spoke. Kohn is a native Philadelphian, and a graduate of Central High School. He is also the author of a new book, The World by Design: The Story of a Global Architecture Firm, which was distributed to guests at the end of the event.

“And it’s all stories,” he concluded, after receiving the award, “so it’s easy to read.”

It was the second year that the awards were presented during a dinner and cocktail event at the IAC Building in Manhattan. Awards included the medal given to Kohn along with the Kanter Tritsch Prize in Energy and Architectural Innovation, which is awarded annually to a second-year Master of Architecture student. The awards were established through a generous gift from Weitzman alumna Lori Kanter Tritsch and Penn Trustee and Wharton alumnus William P. Lauder, and first awarded last year. This year’s Prize, a $50,000 scholarship for a Master of Architecture student in the final year of study, was awarded to Patrick William Danahy (MArch’20).

In 2018, alumnus Bill Witte (C’73, MCP’75) and his wife Keiko Sakamoto created The Witte-Sakamoto Family Prize and Medal in City and Regional Planning, consisting of a $50,000 scholarship for a student in the final year of the Master of City and Regional Planning Program, along with a professional award for planning work that embodies values related to social equity, environmental quality, design, public health, mobility, housing affordability, and economic development. This year’s student winner was Amie Patel (MCP’20), and the medal was given to the Regional Plan Association (RPA) for its Fourth Regional Plan for the New York metro area, which was published in 2017.

Patrick Danahy, who was profiled in a short video screened at the event, was an architecture student at Clemson University trying to find the right application for both his creative and scientific passions before starting the Master of Architecture program at the Weitzman School. At Penn, he has worked as a research assistant in the Autonomous Manufacturing Lab, led by Assistant Professor Robert Stuart-Smith, and helped create an innovative prototype of a tiny house in the school’s Robotics Lab. There’s more research work in store for his last year at the school, Danahy said during the cocktail hour at the ceremony, including work related to artificial intelligence and “self-critiquing” design processes. With the Autonomous Manufacturing Lab, he’s working on a speculative redesign for the Notre Dame cathedral spire in Paris, which was destroyed by a fire in the spring.

Amie Patel, who was introduced to the audience in a short video, had just returned from a studio trip to Puerto Rico, where she and her classmates were studying planning for formal and informal development in the wake of hurricanes that struck the island over the last several years. Patel worked as a landscape architect for four years before starting a Master of City Planning degree at the Weitzman School. Since she began the program, said Lisa Servon, who is Kevin and Erica Penn Presidential Professor and the department chair, Patel has been “a quiet leader” among her cohort. In Puerto Rico, Patel says her studio was helping survey the needs of community members in hurricane-affected areas, and trying to empower residents to create their own survey and data-collection methods, because Puerto Rico struggles with a lack of reliable information about its communities. She likes the design aspects of landscape architecture, Patel said, but never felt like there was enough engagement with the people she was designing for. Planning lets her be more people-focused, she said.

“We’re looking at how we can better prepare neighborhoods for disaster when they happen,” Patel said after the ceremony. “It often feels like we’re coming in as outsiders, but it’s about them—what’s going to be implemented in their community.”

Weitzman Dean Fritz Steiner introduced Tom Wright, the president and CEO of the Regional Plan Association, calling the RPA’s latest work “a set of bold proposals that includes expanding the region’s transportation network, addressing affordable housing, mitigating climate change, and fixing the institutions that are failing the region.” Wright said he accepted the inaugural Witte-Sakamoto Family Medal with a mixture of gratitude and pride, plus relief that his team at RPA hadn’t been the first to bungle a regional plan in the organization’s century-long history, he said jokingly. RPA and the Weitzman School have a close relationship, Wright said.

“We have hired a lot of your recent graduates, and they’ve become valued members of our team …” Wright said. “At RPA, we look to Penn, and we think we have a kind of special relationship with you.”

Like the prize-winning students, the Weitzman School was introduced to the audience with the screening of a short video. The interviewees include the School’s five program chairs and several of the faculty members leading research centers.