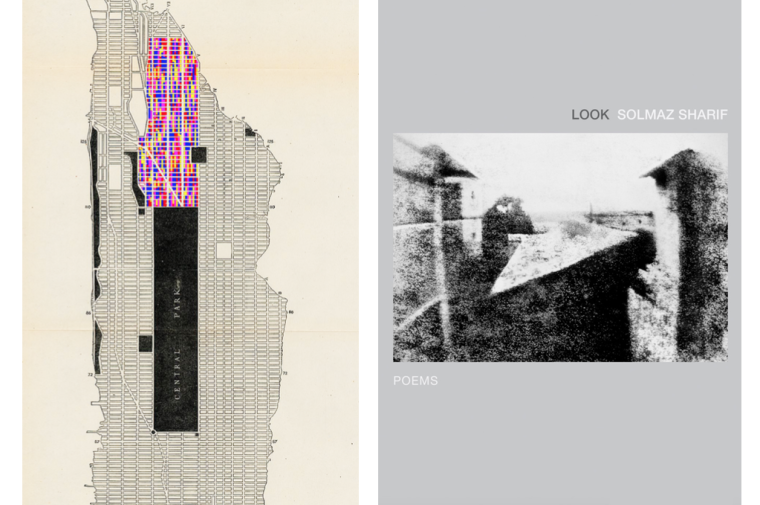 Left: Charles Davis II, “Architextural” map of Harlem, revitalized by the urban design principles of June Jordan’s His Own Where; Right: Solmaz Sharif’s Book Look: Poems (2016), Book Cover with View from the Window at Le Gras, Finalist of the National Book Award. 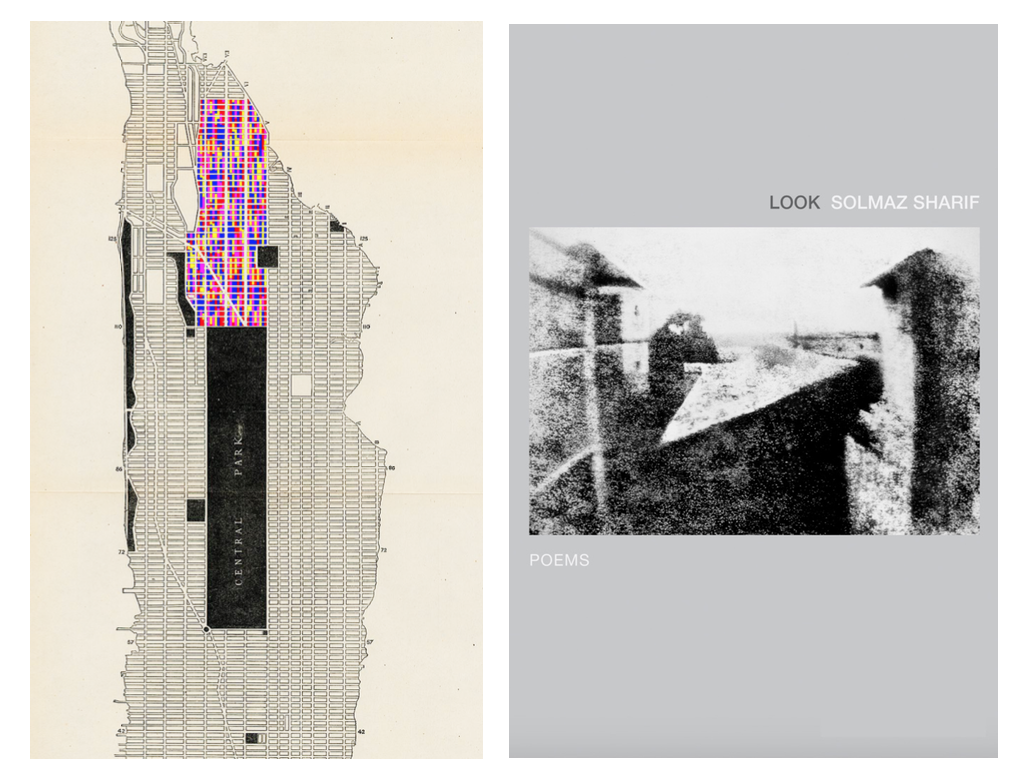 Left: Charles Davis II, “Architextural” map of Harlem, revitalized by the urban design principles of June Jordan’s His Own Where; Right: Solmaz Sharif’s Book Look: Poems (2016), Book Cover with View from the Window at Le Gras, Finalist of the National Book Award.

Lecture Series on the Synthetic: Charles Davis and Solmaz Sharif in Conversation

“I can’t do what I want / to do with my own body”: A Reading in Conversation with June Jordan
Solmaz Sharif, Assistant Professor in Creative Writing, Arizona State University

Solmaz Sharif will be reading from her first book, as well as more recent poems, which look at the ways behavior and language are dictated by the state. Her first book, Look, uses terms from the US Department of Defense’s Dictionary of Military and Associated Terms to examine the ways state-sponsored violence against bodies is premeditated and excused in a violence against language. Her collection in progress, Customs, looks at the more amorphous ways a language of power is pressed upon alien bodies in order to correct, control, and orchestrate behavior acceptable to empire. As this work is in on-going conversation with work by June Jordan, in whose Poetry for the People program at UC Berkeley Sharif studied and taught, Jordan’s work will also be read.

Born in Istanbul to Iranian parents, Solmaz Sharif holds degrees from New York University and U.C. Berkeley, where she studied and taught with June Jordan’s Poetry for the People. The former managing director of the Asian American Writers’ Workshop, her work has been recognized with a “Discovery”/Boston Review Poetry Prize, Rona Jaffe Foundation Writers’ Award, and an NEA fellowship. She was most recently selected to receive a 2016 Lannan Literary Fellowship and the 2017 Holmes National Poetry Prize from Princeton University. A former Stegner Fellow at Stanford University, she is currently an Assistant Professor in Creative Writing at Arizona State University. Her first poetry collection, LOOK, published by Graywolf Press in 2016, was a finalist for the National Book Award. Her work has appeared in Harper’s, The Paris Review, Poetry, The Kenyon Review, the New York Times, and others.

This creative work examines the modern architectural principles elaborated by African American writers during the postwar period. It uses architectural drawings and models to visualize the utopian implications established by the writings of the novelist Paule Marshall (1929- ), the poet June Jordan (1936-2002), the dramatist Amiri Baraka (1934-2014), and the philosopher Angela Davis (1944- ). While most of these writers never received formal training in architecture, they each found ways of radically incorporating the language and principles of architectural modernism into their reinterpretation of poor, black, urban spaces that moved beyond mere description.* Davis argues that their rhetorical manipulations of space operate on the same level as utopian architectural schemes: both mediums liberate the architect’s imagination by relaying a set of physical strategies for reforming the built environment. In the end, this work will help architects and architectural historians to recognize the seminal contributions of creative artists in allied fields, which expands the historiography of architectural production to reflect the genius and contributions of nonwhite producers that are often overlooked in canonical narratives of the past.

Charles L. Davis II is an assistant professor of architectural history and criticism at the University at Buffalo. He received his Ph.D. in architecture from the University of Pennsylvania and has an M.Arch and B.P.S. from the University at Buffalo. Charles is the author of Building Character: the Racial Politics of Modern Architectural Style (University of Pittsburgh Press, 2019) and co-editor of the cultural reader Diversity and Design: Understanding Hidden Consequences (Routledge, 2015). He is also co-editor of the forthcoming Race and Modern Architecture: A Critical History from the Enlightenment to the Present (University of Pittsburgh), which establishes a critical history of race in the field from the Enlightenment to the present. He has published articles and essays in Journal of the Society of Architectural Historians, Harvard Design Magazine, Log, and Aggregate. His current creative project translates the spatial and material principles of black protest literatures into architectural models that extend the history of postwar architectural utopianism.

*June Jordan was the only figure to formally receive academic training in architecture, although it mainly consisted of pre-professional studies. Her undergraduate coursework was in Architectural and Environmental Design. She later went on to work with the utopian architect Buckminster Fuller and was awarded a Rome Prize in Environmental Design with his support.