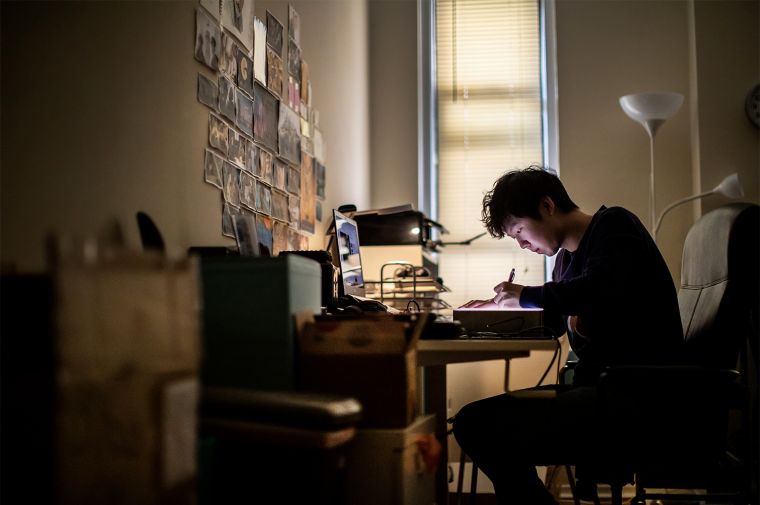 Pictured in his West Philadelphia apartment before pandemic restrictions shut the campus in March, Kim is now living with his family in Seoul while completing his degree in fine arts and cinema studies.
Photo Eric Sucar 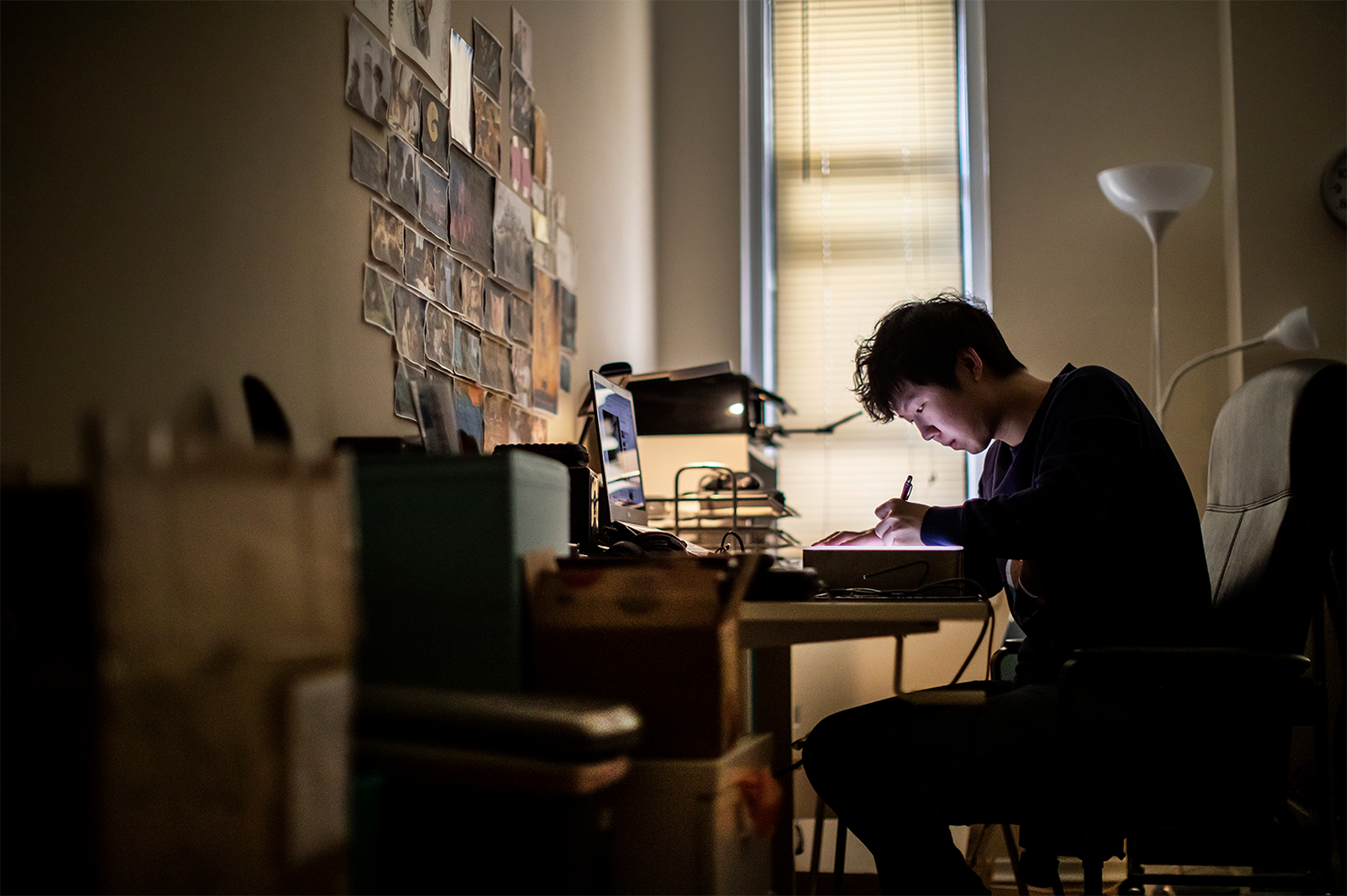 Pictured in his West Philadelphia apartment before pandemic restrictions shut the campus in March, Kim is now living with his family in Seoul while completing his degree in fine arts and cinema studies.
Photo Eric Sucar

Using pencils, markers, and watercolors, Dennis Sungmin Kim, a senior in the Undergraduate Fine Arts and Design program, paints and draws by hand hundreds of pages of illustrations to create his award-winning animated short films.

Kim’s latest completed creation, The Beginning, his third film to win top honors in the Penn Student Film Festival, is now streaming on the commercial online platform Film Movement Plus.

“The one-line synopsis is ‘a boy alone in his world is visited by a familiar and unexpected figure.’ It’s a relationship story, one specifically about family,” says Kim, who is pursuing a double major in fine arts and cinema studies in the College of Arts and Sciences. “Like the other films that I have created, there is a very personal touch to this film.”

“The Beginning” premiered at the National Film Festival for Talented Youth (NFFTY), where it played in the “Animation Sensations” screening block. The festival recently released a podcast featuring Kim speaking about the film and his creative process.

The nearly nine-minute film is a heartwarming fantasy, a similar genre as his other two films that won the Penn film festival, ei: Emotional Intelligence, a love story between two artificial intelligence units, that received international accolades, and Elliot, a coming-of-age romance about a young elephant.

“I am very grateful that Penn has these avenues to showcase the work of its students. Filmmaking itself is so difficult; just like other art forms, so much heart and soul goes into creating every film. It’s that continued support that allows you to push through the long hours of drawing and animating and really helps and motivates you,” he says.

Kim is working on his next film while living with his family in Seoul, where he has been since March because of the pandemic restrictions. He describes the Fine Arts Senior Seminar thesis project as a “fantastical animated short narrative” in the same sci-fi genre as his previous shorts.

“I’ve had the idea for a very long time,” Kim says, keeping the details under wraps until its release. “It feels like the perfect time to work on animation. In a way the virus has put me in a position to work on an animated film rather than one in live-action.”

During his junior year, Kim had completed a script for a live-action film in the spring which he intended to produce in the summer with friends in California, but the pandemic ended those plans. “Maybe I’ll get back to it one day,” he says. “If my reality has been adjusted or altered to really focus on an animated film, so be it. I’m happy to be working on it.”

Kathy DeMarco Van Cleve, who teaches screenwriting at Penn, is a “spiritual and motivational” mentor who has been encouraging and supportive, he says. Van Cleve says Kim has “a gigantic imagination and an equally expansive intellect.”

“Dennis is a creative wunderkind—adept at creating affecting, poignant stories that grab your heart and make you smile, even when sad things happen to the funny little blobbish characters he’s created,” Van Cleve says. “His writing is truly quirky—not pretend quirky like that word often implies—and he has a distinct, humane, and often surprisingly strong point of view that sustains all of his work in the best possible way.”

Joshua Mosley, professor of fine arts at the Weitzman School, is another mentor at Penn, Kim says, having taken his courses Mixed Media Animation, Computer Animation, and Functions for Form and Material.

“Dennis’s concerns about his scripts and animation technique refinement were nuanced, and fun to discuss,” Mosley says. “In the broad sense, his stories have been about the immaterial nature of characters relationships with each other and with their (human or nonhuman) questions of existence. His characters’ personas have ranged from AI bots to animals, to humans, and have taken the form of geometric shapes, animated bipedal forms.”