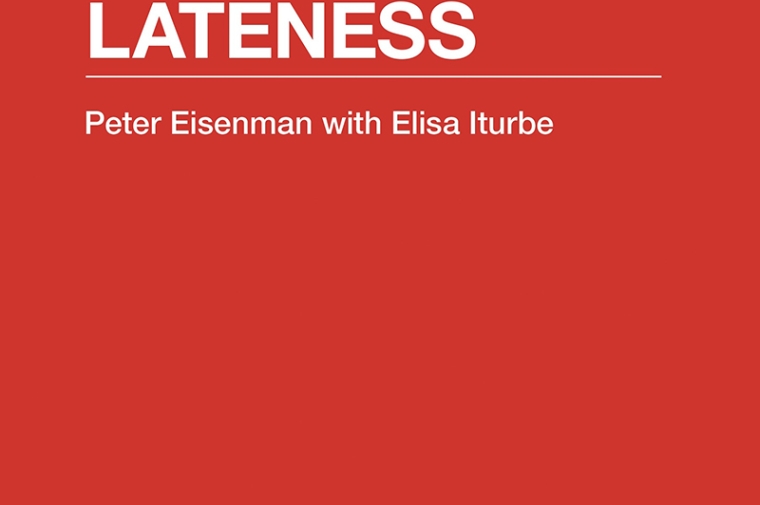 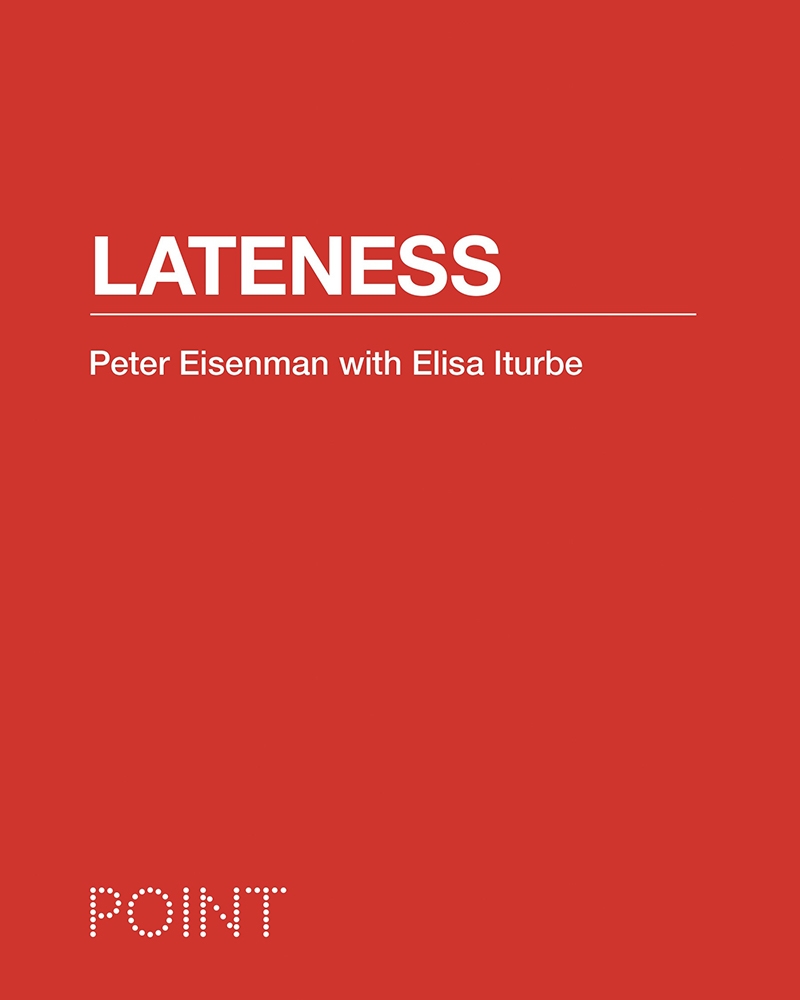 Lateness (Princeton University Press, 2020), a new book from renowned architect Peter Eisenman, the 2020 recipient of the Kanter Tritsch Medal in Architecture, examines the work of architects Adolf Loos, Aldo Rossi, and John Hejduk for the ways it was out of sync with its time. Bringing together architecture, music, and philosophy, and drawing on illuminating examples from the Renaissance and Baroque periods, Eisenman and co-author Elisa Iturbe suggest “lateness can serve as a form of release from the restraints of the moment.”

The Formal Basis of Modern Architecture was my first attempt to move away from the idealizing tendencies of the modern by using an analytic frame devoid of function, technology, or social purpose. But an unacknowledged idealism and a universalizing tendency remained in my belief that an underlying modern language could connect four very different works of architecture: those by Frank Lloyd Wright, Alvar Aalto, Giuseppe Terragni, and Le Corbusier. And in fact, at the time of writing, Colin Rowe, in a 1963 letter providing commentary on an early draft of the text, asked, “Why is modern being singled out while your principles are thought of as universal?” In Rowe’s opinion, the dissertation was arguing for the modern as a universalizing force, and as such could only ever uphold the idealizing tendency of the zeitgeist. In other words, the conception of the modern as universal projected the modern into the indefinite future, replicating its future-oriented temporality. It is clear in retrospect that Rowe was, in part, correct: first because it is possible today to see that The Formal Basis had assumed the modern was critical in its essence, and as such, idealized its potential to be universal, and secondly because the critical framework of the modern clearly has not held past the middle of the twentieth century, proving that a universal modern framework was not possible.

Despite these lessons learned in hindsight, in the context of today’s digital turn it becomes difficult to avoid similar idealizing notions, as the desire to keep pace with the ever-evolving digital realm echoes the fascination with present and future technologies that characterized the modern. In his book The Second Digital Turn, architectural historian Mario Carpo recounts the shift from spline-based modeling to voxel-based design, outlining how technologies that have the capacity to work with an abundance of data have made formal complexity increasingly possible, a trend that had already begun when scripts and algorithms became widespread tools in architectural design. Since the publication of Robert Venturi’s Complexity and Contradiction in 1966, complexity had become an important critical tool after the modern, introducing a framework for reading form that saw complexity as a means to slow down perception and induce a process of close reading. Unlike Klee’s angel caught in the compulsion toward progress, Venturi practiced a sustained attention to form and space, looking both forward and backward in time—in clear opposition to modern habits, which by that time had transformed into a platform for corporate interests. Complexity, then, became a critical tool and a mode of resistance to institutional power, due to its ability to resist the ideological trends of the time. In today’s context, however, the digital facilitates the production of complexity without heightening its capacity as a critical tool; instead the ease of production normalizes formal difficulty because complexity can be generated automatically by software. As scripts easily generate endless iterations of varied forms, the difference between one form and another is no longer a critical integer but instead the output of a totalizing mathematical process. Any formal complexity in this context becomes normative and thereby ineffective as a mode of resistance to power. Moreover, form can be generated today without concern for constructability, because advances in digital software are paired with ever-more- sophisticated building technologies. With constructability becoming less of a concern, contemporary architecture produces increasingly more exuberant forms, each one just as anomalous as the last, creating a conceptual milieu that is ultimately homogeneous, despite any specific differences between individual forms.

What capacity does architecture have to be critical in this context? While it is tempting to identify the problem as an infatuation with software, perhaps the problem lies in the inherent attitude around time that the digital presents. The techno-zeitgeist of today has returned to a present-based avant-garde, one in which the limits of form are defined by the technical possibilities of the present and in which time might be the integer of possible resistance. If this is so, what might a different attitude toward time look like? For this, it is possible perhaps to turn to Theodor Adorno’s study of Beethoven’s late works. Adorno finds in Beethoven’s late works a return to classical conventions after a long period of rejecting them almost entirely, and yet this classical recapitulation does not follow formulaic classical structures. Instead, Beethoven introduces caesuras and ruptures between classical conventions, and as such, he identifies the fragment as a formal idea, which informs the path that music and other disciplines take in the nineteenth and twentieth century. But Adorno’s analysis is of interest not simply because he succeeds in identifying a formal change that marked the beginning of a new period in musical history, but rather because Beethoven’s unusual treatment of classical conventions problematizes the existing relationship between form and time. The classical conventions that appear in the work inevitably embody a temporal dimension, due to their emergence within a specific historical context and their corresponding associations with particular styles. Yet because of gaps and breaks between these conventions, the classical elements no longer follow the formulaic sequence of classical form, and are thereby transformed from stylistic determinants to autonomous fragments within a work. Untethered from style, they become possibly unbound from time. So, in a way, Beethoven’s late works were neither imitative nor innovative. Instead they rewrote the relationship between the parts of classical form through an approach that did not rely purely on formal anomaly to break from the past, but that disrupted temporal continuity by breaking up the narrative sequence of a piece, and in so doing, questioning the historical context within which the work unfolds. Beethoven’s work looks neither forward nor backward in time, but rather sits outside a temporal progression. Anachronisms no longer operate as historical reference; as fragments they acquire a different capacity to identify with other moments and other eras—including those that had not yet occurred.

Adorno called this phenomenon lateness, and it is different from the modern relationship to history, which focused on a break with precedent, and different from the postmodern relationship to history, which focused on citation and a return to past historical styles. Instead, lateness exhibits temporal ambiguity. The result is something nondialectical, not of the zeitgeist, and not of the avant-garde. Late works are neither of the present nor of the past. They are, as literary critic Edward Said wrote, in and apart from the present. (1)

This essay proposes lateness as a possible different attitude toward form and time in architecture, one that attempts to circumvent stylistic constraints and expand the critical capacity of architecture through the notion of untimeliness. Examples of lateness can be found throughout history, arising when a work is “out of joint” with its time. As such, lateness is a contingent phenomenon. It has no predetermined formal qualities and must be read relative to its historical context. As a result, the outward appearance of lateness changes depending on how a work invokes the conventions of its time or those from previous eras. This text will not attempt to prescribe what the appearance of lateness might be in the contemporary moment. The focus will be instead on the works of three twentieth-century architects who exhibited qualities of lateness in their work: Adolf Loos, Aldo Rossi, and John Hejduk. The goal, however, is not a reevaluation of the twentieth century but a reexamination of the relation between a work and its time, which generates a different mode of close reading that is, in itself, untimely.