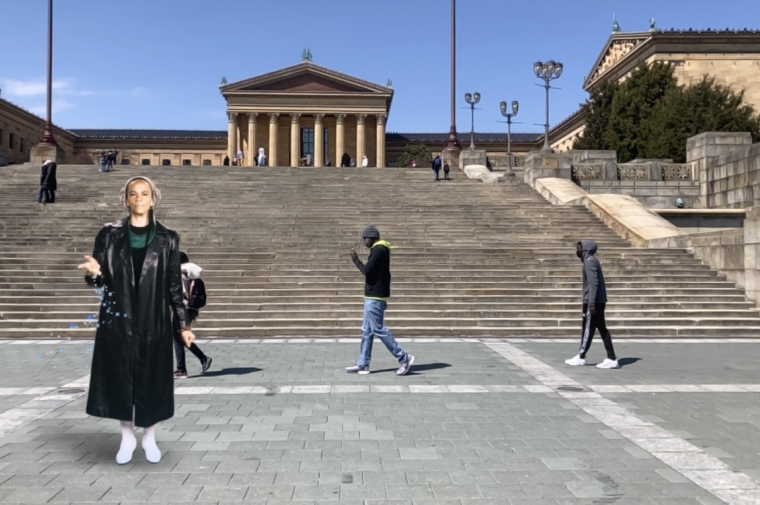 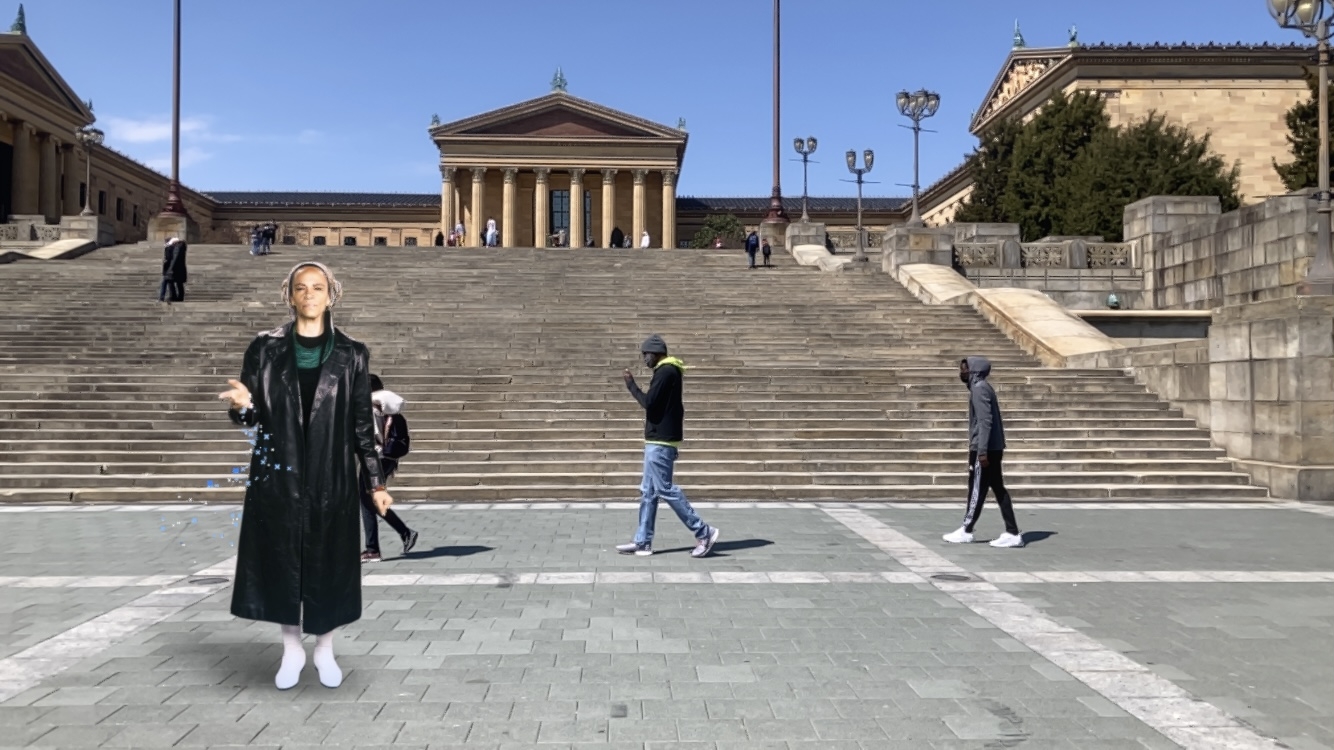 The tour begins with a twinkling of chimes, as Ursula Rucker, the Philadelphia poet and artist, materializes on your smartphone screen like a genie from a bottle. She stands at the base of the Philadelphia Art Museum steps—“the Rocky Steps, as some like to call them,” she says. “The people’s place.” As you scan your phone around the steps, and look out across the Benjamin Franklin Parkway, virtual signs, maps, photographs, and text boxes appear, inviting you to “dig deeper” into the history of the space.

“People don’t put museums out in the street,” Rucker says. “But they should. And we are.”

With its new augmented-reality app, called OverTime, Monument Lab, the public art and history studio that grew out of research at the Weitzman School, is hoping to provide a more immersive way of experiencing public space. The app, which launched last week with a prototype tour at the Art Museum steps, “offers educational, self-guided tours of a public space by unearthing the multiple layers of history, meaning, and interpretation of that site through a personal smart device.” In addition to providing information that may not be visible to the unaugmented eye, the app invites users to add stories of their own.

“The idea behind this, fundamentally, is that history is being written all around us, by us,” says Paul Farber, senior research scholar in the Center for Public Art and Space and co-founder of Monument Lab. “So at each step [in the tour] there’s these ‘plus’ icons, where you can text your own responses to the questions that we asked. We want to actually learn from people who use the app. There’s more to learn from users and there's more stories being written about this place. Any time you see a monument in public space, there’s countless stories that are also present—they just aren’t always marked in the same way.”

Monument Lab began working on the idea for the app before the COVID-19 pandemic began, Farber says. It was developed with Dream Syndicate, a local tech company that creates augmented reality and virtual reality experiences, along with the Center for Public Art and Space at the Weitzman School, Penn Praxis, and the Sachs Program for Arts Innovation. It was funded through a grant from the John S. and James L. Knight Foundation. The pandemic, which has forced people to socially distance while increasing the demand for outdoor experiences, only made the app more timely, Farber says. The group decided to start with the Art Museum steps because of their centrality to the Philadelphia experience, and the layers of history that aren’t readily apparent on the site.

“That ranged from the legacy of Philadelphia as a colonial city, to the development of the Parkway and the demolition of the grid system and homes and businesses that was necessary to create it, through to the more contemporary questions about the Parkway inclusive of the way the Art Museum steps have been used as a space for protests and vigils and other gatherings,” Farber says.

The group plans to eventually incorporate user input back into the tour. Farber says Monument Lab is in conversations with artists planning their own AR experiences in San Francisco and Charlottesville, and that it hopes to create more Philadelphia tours in the future. The app is being launched at a time when society is “entering into this moment of reunion with public space while still carrying with us the cautions and the traumas” of the last year, Farber says. He says he hopes that the app will function less as a tech solution to a modern problem, and more as an invitation to engage more deeply with urban space. That’s also why the group tapped Ursula Rucker, who played a key role in Monument Lab’s 2017 citywide exhibition, to guide its first tour.

“We wanted to make an app that could help you access the past, present, and future,” Farber says. “Who better to lead you through that than a poet?”