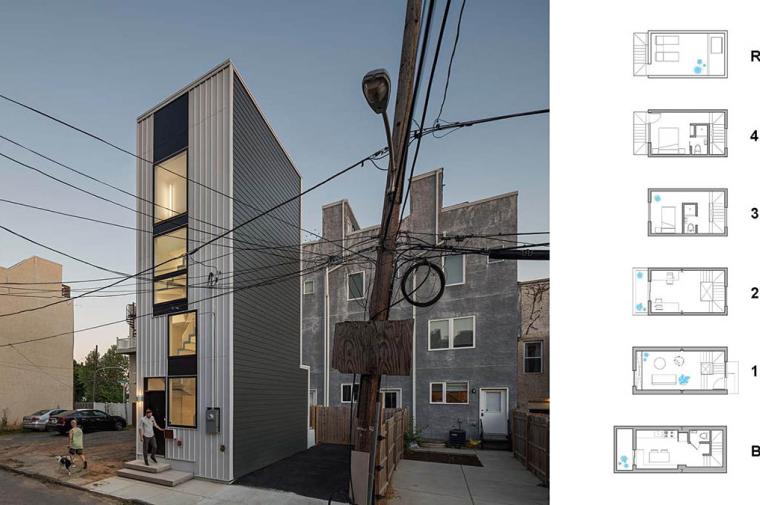 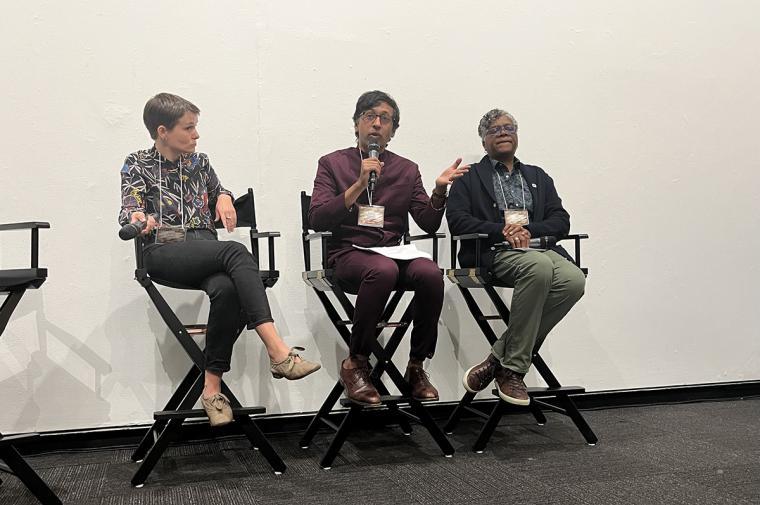 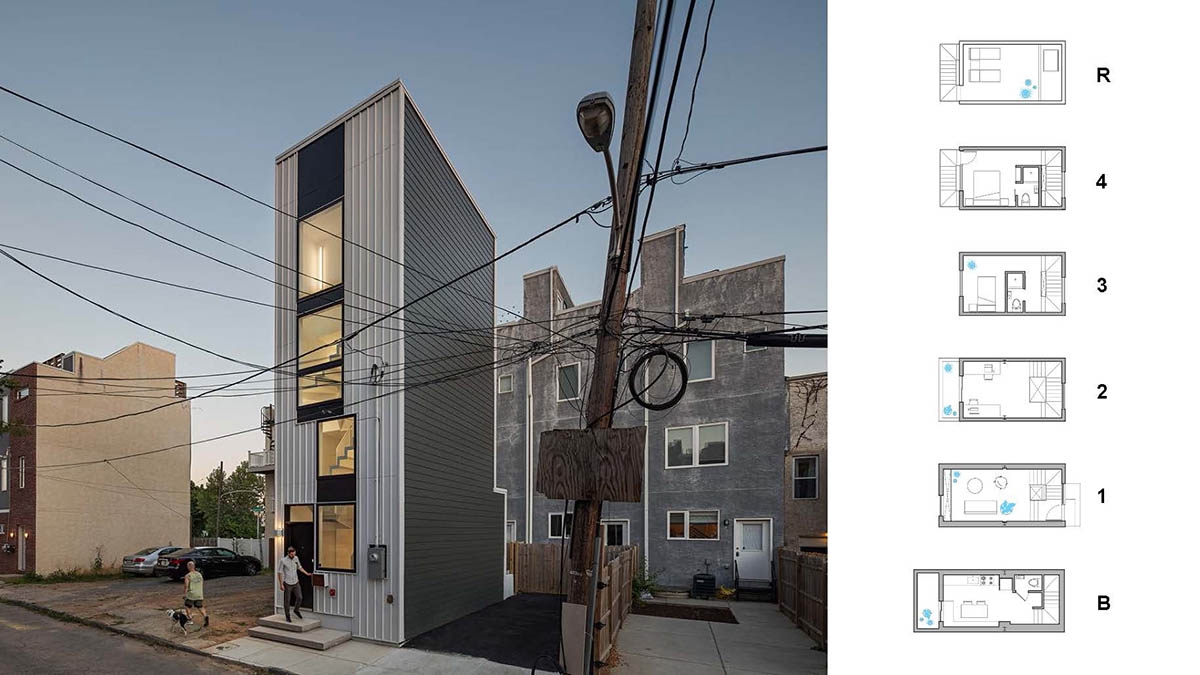 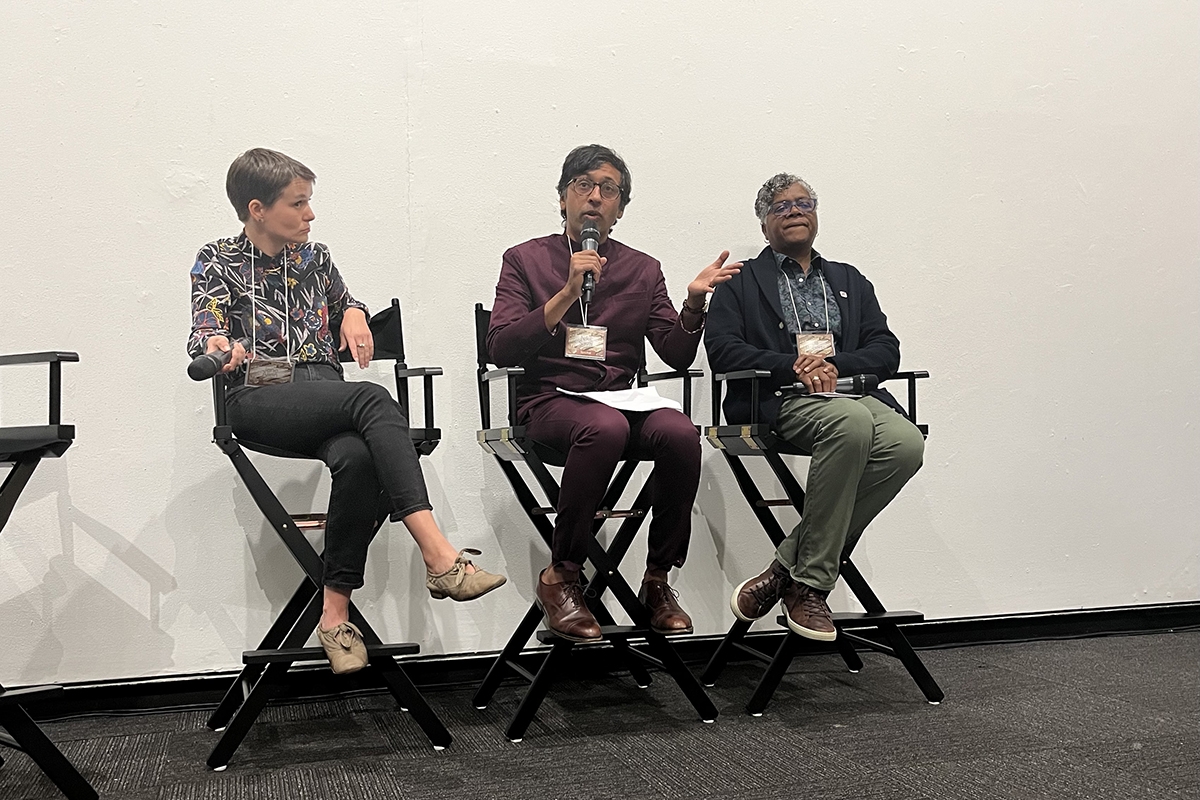 From October 7-8, the Weitzman Graduate Program in Historic Preservation co-organized a symposium on the past, present, and future of the Philadelphia rowhouse. Rowhouse City: History & Adaptation in Philadelphia first brought together scholars on the history of the built environment on day one, and practitioners, activists, and community leaders to strategize for the future on day two. The symposium included presentations from Weitzman’s Francesca Russello Ammon, Associate Professor of City and Regional Planning; Molly Lester (MSHP’12), research associate at PennPraxis; Frank Matero, Gonick Family Professor and chair of historic preservation; Brian Phillips (MArch’96), lecturer in architecture; Casey Weisdock (MSHP’16), and Bill Whitaker, curator and collections manager at the Architectural Archives; as well as many alums and former faculty of the School. At the end of each day, two rapporteurs provided summary remarks to a sold-out crowd in Plaza Gallery: Starr Herr-Cardillo and Jennifer Robinson.

We talk a lot about relevance in historic preservation–usually about how an understanding and appreciation of history can help inform the decisions we make about the built environment around us, and what and whose stories we value. And when you consider the massive challenge of adapting the existing built environment through the lens of social equity and climate resiliency, nothing could be more relevant here in Philadelphia than the rowhouse.

Understanding the historical contexts, materials, and building technologies that shaped older rowhouses has real implications for the present. As we heard today, the majority of Philadelphia’s housing stock is rowhouses, and the majority of those are more than 50 years old. They are a huge source of naturally occurring affordable housing; they also offer a more communal way of living: they’re most often engineered to function as a comprehensive whole, not as individual units–they literally support one another.

As the presenters elaborated today, rowhouse blocks and rowhouse neighborhoods have been shaped by various forces over centuries: available materials and technologies, fashion, speculation, regulation, urban renewal, and systemic racism. Social and political forces like redlining, disinvestment, gentrification, displacement, and other development patterns compound many of the physical issues with older building stock that might put people at risk, as we’ve unfortunately seen with recent building collapses.

And that’s why it’s so appropriate that this symposium took today to dive into the context and history of the rowhouse, before launching into strategies for preservation and adaptation, tomorrow.

Today, we considered rowhouse precedents, looking at the “family” of cities with rowhouses on both sides of the Atlantic. Charles Duff positioned Philadelphia as “the center of America’s Rowhouse Belt,” a discontinuous region that includes Philadelphia, Harrisburg, Baltimore, New York, Savannah, and dozens of other cities with residential densities significantly higher than America’s suburbs.

Calling for a “dialogue between the family of rowhouse cities,” he emphasized the opportunity for exchange between these cities, reminding us that whatever problems we’re dealing with here in Philadelphia, have likely been encountered elsewhere.

Kim Hoagland examined the rowhouse through the lens of regulation in Washington, D.C., tracing how factors like emerging theories on health and safety informed municipal laws and regulations that reshaped the rowhouse. Turns out, a lot of what we might be inclined to attribute as purely stylistic choices: a bay window, a wood cornice, a porch, may really be responses to governmental regulation.

The intersecting issues of class, race, displacement, and the rowhouse as real estate were also examined:

Donna Rilling looked at Black settlements in West Philadelphia between 1810 and 1870, specifically getting into the details around how individual Black homeowners were purchasing land and building in Blockly Township. Amy Hillier detailed aspects of W.E.B. Du Bois’s experience when he was contracted by the University of Pennsylvania to survey residents in Philadelphia’s Seventh Ward.

Andrew Dolkart shed light on the phenomenon of “redesigned rowhouses” in New York City and how they influenced the rehabilitation of rowhouses around Rittenhouse Square. Plain brick facades were refaced in colorful stucco by wealthy socialites and enhanced by decorative elements like Moravian tiles to evoke an eclectic European feel, a “transformative” process that wasn’t shy in its intention of displacing existing Black and lower income residents.

Francesca Ammon took us on a rowhouse tour exploring Philadelphia’s “conservationist approach” to Urban Renewal in Society Hill, which re-envisioned the neighborhood through targeted demolition, infill development, and restoration. The stories of Society Hill’s transformation are stored in a digital archive of oral histories, maps, photographs and other records and are available at the website Preserving Society Hill.

And finally, Brian Phillips brought today’s sessions to a fitting end, looking at “the implications of rowhouse fabric for the present and the future,” considering “rowhouse possibilities,” and reimagining rowhouses with intention.

All of the themes covered today continue to shape our rowhouse city: their ongoing adaptation; what our laws and building codes permit or require, how they are enforced, and how they shape our city; the types of financing mechanisms that are available and to whom; what constitutes affordability across a rowhouse city; and what makes for a strong and healthy rowhouse community.

“For preservation of our rowhouse neighborhoods to be successful, we might consider restructuring our thinking from a focus on aesthetics, the traditional definition of integrity, and historic designation, as the only tools in our box to thinking that is focused on the user.”

Jennifer Robinson (MSHP’15) is the director of preservation services at the Preservation Alliance for Greater Philadelphia.

Yesterday’s sessions covered the historical development of the rowhouse and the documentation of their spatial, racial, class, economic, and geographic distribution, as well as the fifty shades of red brick, to quote Charlie Duff.

Today’s sessions focused on the ideas of change, sustainability, and the future of the rowhouse. Kiki Bolender started our day with a reminder that rowhomes are about both the buildings and the people, they do not exist in isolation. And as Senator Nikil Saval noted, the right to be housed is a basic human right–one that is connected to health, safety, and the ability to participate in society fully.

For preservation of our rowhouse neighborhoods to be successful, we might consider restructuring our thinking from a focus on aesthetics, the traditional definition of integrity, and historic designation as the only tools in our box to thinking that is focused on the user. In my opinion, preservationists need to look at rowhouse neighborhoods across the city as an opportunity to practice a more holistic form of preservation. We need to meet people where they are, and understand and support their dedication to and pride in their home. We must think about the up-front cost of preservation regulations and energy-efficiency goals. Long-term savings still require capital outlay at the start.

Instead of thinking of the way the rowhouses look, what if we think about how they work, as Charlie Duff suggested yesterday morning. What if we reframe preservation as a layered pyramid, in the model of the Maslow Hierarchy of Needs, where we make the foundation of preservation to be focused on making sure the house is safe, dry, and functional for the resident. Often the cosmetic alterations to row houses that are deemed to lower neighborhood integrity are the choices made by owners to maintain those basic needs while juggling other financial demands. Is the repair or restoration of a pressed metal cornice a better use of limited funds than paying the heating bill?

This morning, Senator Nikil Saval presented his recently passed legislation of the Whole Home Repair Act which provides significant funding for homeowners to make repairs that keep occupants safe and healthy, connects them to technical assistance, and creates programs for job training in building trades. He shared research that says one in four PA voters lives in a home that needs a critical repair.

We heard from Jill Roberts on the Healthy Rowhouse Project about the challenges of creating new programs that offer holistic repairs to keep people in warm, safe, dry and healthy homes. A program like this can help to redress the effects of racism, redlining, and inequitable wealth accumulation. As Jill said, “The most important affordable home is the one a family is living in now.”

Liz Robinson gave us a report on the state of Philadelphia as a net-zero energy city, and how energy efficiency and weatherization programs are creating this path for us, recognizing that preserving naturally-occurring affordable housing requires energy savings and minimization of maintenance costs.

Passive row house design was the focus of Paul Thompson’s talk, which creates an environmentally friendly, energy efficient, and comfortable environment for users. Michael Hauptman discussed the development of Philadelphia’s first Neighborhood Conservation District in Queen Village to combat the effects of “garagification.” This created design guidelines that kept eyes on the street and retained property values.

Timothy Lynch and Justin Spivey brought us the engineer’s perspective on the challenges of shared wall construction and the effect of mid-row demolitions as well as a look at how these concerns might be addressed in future permitting and building code definitions. There was also that venn diagram that only an engineer could have imagined.

And we wrapped up the day with an all-star panel of Kathy Dowdell, David Perri, Ian Smith, and Ken Weinstein, moderated by the incomparable Inga Saffron. Touching on costs of construction, tax abatements, the lifespan and fire rating of old versus new materials, and the unintended consequences of the zoning code change in height limit.

Let me leave you with this thought at the end of today: Historic preservation isn’t about going back in time, it’s about managing change for the future.