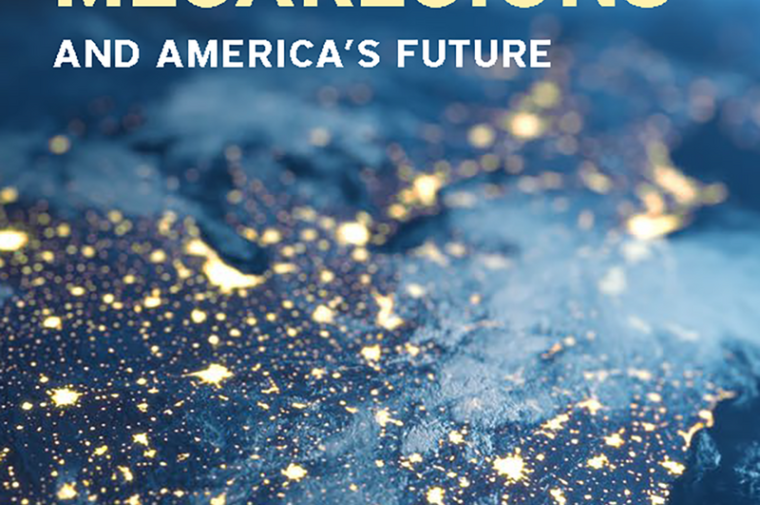 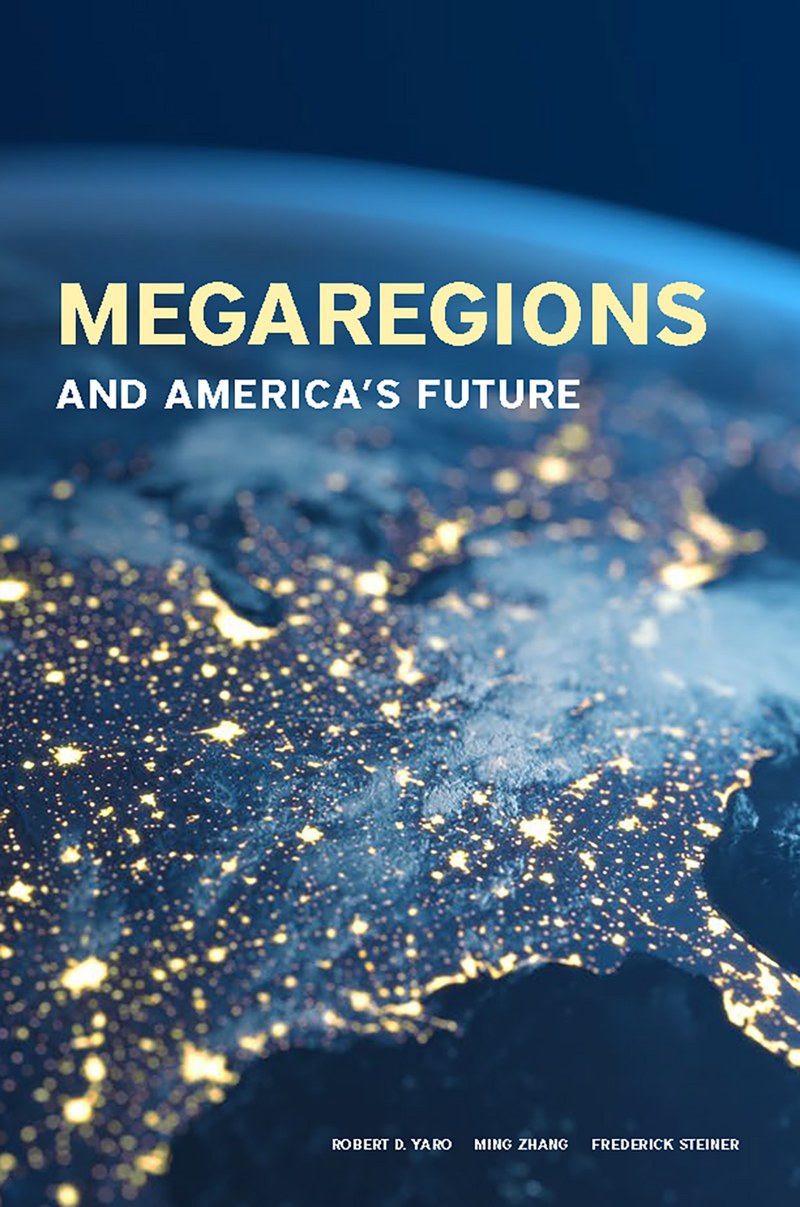 Megaregions—a concept pioneered by Robert Yaro, professor of practice emeritus in city and regional planning, in a Penn studio more than a decade ago—can help the United States contend with its mega-challenges. A new book, Megaregions and America’s Future (Lincoln Institute of Land Policy, 2022) by Yaro, Ming Zhang, professor of community and regional planning at the University of Texas at Austin, and Fritz Steiner, dean and Paley Professor at Weitzman, reviews the origins of the megaregion concept and the economic, ecological, demographic, and political dynamics to help readers understand trends, processes, and innovative practices within and between megaregions and identify the most pressing challenges that demand strategic decisions and actions. In this excerpt, Yaro, Zhang, and Steiner reflect on what they have learned by becoming urban and regional planners. The excerpt continues with the concluding chapter of the volume, which summarizes the important takeaways from the book.

A book launch for Megaregions and America’s Future will take place on Thursday, March 17, 6:00pm.

What Has Yaro Learned?

From his experience over decades of working to protect large landscapes and advance other public policy goals, Yaro concluded that a key to success is to not only have a compelling vision that inspires action but also stay focused on political realities. In Theodore Roosevelt’s admonition, “Keep your eyes on the stars, but your feet on the ground” (1). This was good advice in the late 19th century, and is valid today. In addition, success depends on patience, persistence, and perseverance. Yaro learned that it might take years, or even decades, to achieve his objectives.

Finally, it is important to seek allies with diverse interests and create coalitions of unlikely partners to build political support. The coalition behind the creation of the Long Island Central Pine Barrens protection plan, for example, included the Long Island Association business group, the Pine Barrens Society, the Nature Conservancy, and the Long Island Homebuilders Institute. Although each of these groups had its own narrowly defined special interest, they came together around a shared interest to protect this 100,000-acre groundwater and ecological preserve. Generally, it is enlightened self-interest, not altruism, that motivates people to take action on difficult environmental and land conservation initiatives. A focus on public health—in particular, public water supply protection—is a motivator. People get the connection between their health and what comes out of their water taps. A concern for public health and disease prevention was one of the reasons for the creation of Frederick Law Olmsted’s urban parks in the 19th century, and along with climate change, it remains a prime motivator for action is the postpandemic time.

What Has Zhang Learned?

What Has Steiner Learned?

Dwight Eisenhower once said that “plans are useless, but planning is indispensable” (2). A plan is but one artifact of planning. Successful planning yields many other results. Ideas from the planning process, realized in the built environment, result in better places for people to live, work, study, recreate, and worship. Lives are transformed.

From his national and international experiences in planning at the megaregional scale, Steiner has learned the following lessons:

Megaregions and the Next “American Century”

All of us are called, each to his own measure of capacity, and each in the widest horizon of his vision, to create the first great American Century.
—Henry Luce, Life Magazine, February 17, 1941

In 1941, just before the United States entered World War II, Henry Luce proclaimed the 20th century to be the “American Century.” Whether the 21st century becomes the second great American century will be determined by the success of the nation’s megaregions.

In the 21st century, the United States may no longer have the world’s largest economy for the first time since 1870, when U.S. GDP surpassed that of Germany and the United Kingdom. China is expected to surpass the United States in GDP within the next 5 to 10 years because of decades of declining investments in U.S. infrastructure and lagging productivity growth—and unless Americans rise to this challenge, we will no longer have the economic resources needed to sustain our standard of living and advanced research base or to support a robust defense establishment.

In 1956, at the height of the Cold War, strengthening the economy and national defense were two of the reasons the Clay Committee recommended that President Eisenhower and a Republican Congress raise taxes to build the National Defense and Interstate Highway System. This investment helped create U.S. metropolitan regions. It also underpinned a fivefold increase in GDP over the next five decades and enabled the United States to make defense investments needed to win the Cold War. It is time for similarly bold action today but, this time, focused on activities and investments for U.S. megaregions to reach their full potential, in much the same way that the interstate highways enabled the growth and success of metropolitan regions in the mid-20th century.

The nation’s megaregions will determine whether the United States can compete with China and other growing economies and sustain its high standard of living. The 13 U.S. megaregions are home to more than 80 percent of the nation’s population and close to 90 percent of its economy. They are home to its innovation economy and most of its major research universities, teaching hospitals, and national laboratories. Unleashing the creative capacity of these places will allow them to continue to be engines for the prosperity of the whole country throughout the 21st century and beyond.

U.S. megaregions are also home to more than 80 percent of the nation’s growing Black, Latinx, and immigrant populations, many of whom are not part of the economic and social mainstream. If the places where they live can achieve a zero-carbon economy and adapt to climate change, the rest of the country can, too. And finally, sustaining the livability and vitality of U.S. megaregions will determine the future standard of living and quality of life enjoyed by the next generations of Americans for decades to come.

To finance and deliver needed investments in megaregion-scale infrastructure, alternative energy, climate adaptation, and other measures will require new governance and public finance systems and new levels of innovation and public entrepreneurship not seen since the New Deal nearly a century ago. Fortunately, the templates for these innovations already exist in many parts of the United States and overseas, but they must be adapted to the unique circumstances and politics in each megaregion. Overcoming bureaucratic inertia and political foot-dragging in adapting the models will not be easy. The political reality is that for multistate megaregions, many governors and state legislators will resist creating agencies that will be beyond their control. Even megaregions contained within one state may have considerable resistance to the innovations proposed in this book. With megaregions encompassing portions of 44 states, however, it should be possible to mobilize congressional leadership around the investments and institutional changes proposed here.

Rebuilding the nation’s infrastructure and economic capacity will require the full range of financing options, including taxes, tolls, fares, and other user fees; for long-term investments it will require, judicious use of deficit financing. But not tax cuts. Since the Reagan administration, Republican presidents and talking heads repeat the mantra that prosperity depends on cutting taxes. What is the result? Economic inequality grows, and funding is not there for critical investments in both physical and human capital. We have not, for example, built a new international airport since Denver opened its airport a quarter century ago. But U.S. competitors in Europe, Asia, and the Middle East have either modernized and expanded or built dozens of airports. As noted in chapter 9, the United States has not built a single high-speed rail line, but virtually every other developed and developing country in Europe and Asia has built entire high-speed rail networks.

Creating institutions and implementing reforms will require bold federal leadership and financial incentives to mobilize all levels of government and all sectors of society. We should look for inspiration to FDR’s New Deal, whose programs were enacted during a similar period of economic, social, and political turmoil. FDR’s commitment to large-scale innovation and experimentation transformed the economy and landscape of the country. The United States still benefits from this legacy, and almost a century later, it is time to do it again.

Americans have always turned major political and economic catastrophes into opportunities for reform, investment, and innovation. The combination of the COVID-19 pandemic and the unprecedented economic, racial, and political unrest is the catalyst for today. Achieving the goals outlined in this book requires that we rise above narrow partisan politics and the social wars that have distracted Americans for much of the last half century. The $550 billion of new funding in the Infrastructure Investment and Jobs Act (of the total $1.2 trillion) signed by President Biden in November 2021 should be seen as a down payment toward this goal (6). And even if current proposals for high-speed rail projects like North Atlantic Rail are not funded now, this act can enable engineering, permitting, and early action demonstration projects for this and other priority initiatives. By enabling these and other strategic investments in America’s megaregions, we can ensure a bright, prosperous future for this and ensuing generations of Americans.