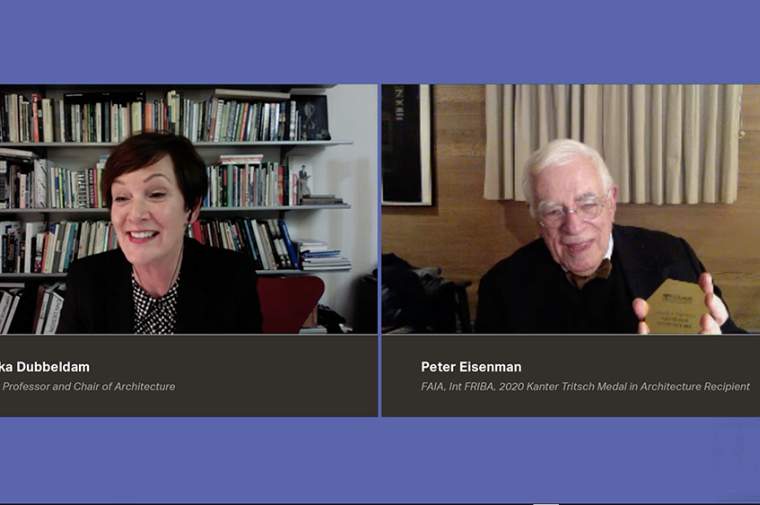 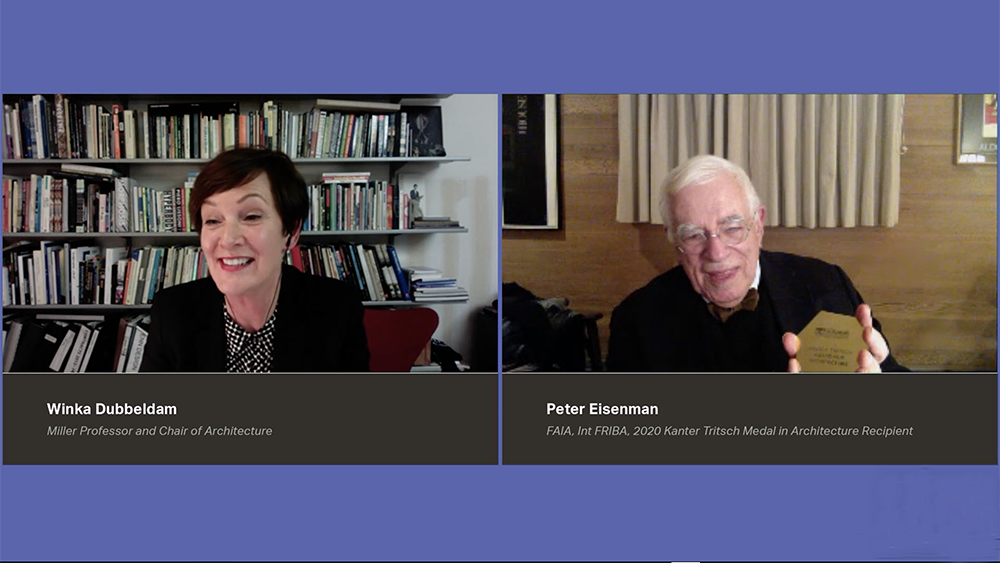 Since architect Peter Eisenman founded the renowned Institute for Architecture and Urban Studies in New York in 1967, he’s earned important commissions around the world and published a number of influential writings. In 2005, his much-anticipated design for the Memorial to the Murdered Jews of Europe in Berlin was dedicated. This year, he co-authored the book Lateness, in which he brings an entirely original perspective to the legacy of Adolph Loos, John Hedjuk, and Adolph Rossi. And last Wednesday, from his home in Connecticut, Eisenman accepted the Kanter Tritsch Medal in Architecture during the 2020 Weitzman School Awards ceremony.

“It’s hard for my work to win prizes,” Eisenman said, holding the medal up to his webcam for the attendees to see, adding, “I want to thank Lori Kanter Tritsch.”

The all-virtual awards ceremony was another first in a year of unprecedented challenges and experiments at the Weitzman School and across higher education.

In accepting the Medal, Eisenman spoke about his career and intellectual interests with the Weitzman School’s Miller Professor and Chair of Architecture Winka Dubbeldam. Dubbeldam also presented the Kanter Tritsch Prize in Energy and Architectural Innovation, which is awarded to a Master of Architecture student entering their final year of study, to Paul Germaine McCoy. McCoy’s portfolio of work is “truly remarkable for its command of material and form, strong point of view, and intellectual rigor,” Dubbeldam said.

In a pre-recorded video, McCoy introduced himself as “a gay, Mexican-American architect from Mission, Texas,” whose mother sold everything she had in Zacatecas as part of a lifelong mission to get him the best education possible.

“One of the things that made Penn stand out for me was its focus on drawings,” McCoy said. “Drawings are something that has agency not only in practice and in terms of the law, but they’re also this incredible workspace to think through and express different modes of representation, texture, and hopefully something that’s immersive, that invites anyone outside of design to engage with.”

McCoy said he considered winning the Prize to be another platform for greater opportunities. The Kanter Tritsch prize includes a $50,000 scholarship to cover the winning student’s final year of study. The Kanter Tritsch Medal and prize were established in 2017 by a $1.25 million gift from alum Lori Kanter Tritsch (MArch’85), an architect and member of the Weitzman Board of Advisors. and her partner William Lauder, a 1983 graduate of the Wharton School and Penn trustee.

In 2018, the Weitzman School received another $1.25 million gift from alum Bill Witte (C’73, MCP’75), also a member of the Board of Advisors. and his wife Keiko Sakamoto, Esq. The Witte-Sakamoto Family Prize in City and Regional Planning includes a $50,000 scholarship to cover the final year of study for a student in the Master of City Planning program. The Witte-Sakamoto Family Medal in City and Regional Planning is given to a firm or team for a plan that exemplifies social equity, environmental quality, design, public health, mobility, housing affordability or economic development.

This year’s winner of the Witte-Sakamoto Family Prize was Avery Harmon, a city planning student expecting to graduate next year. Lisa Servon, the Kevin and Erica Penn Presidential Professor and Chair of City and Regional Planning, said that Harmon’s work embodies Witte’s goals for the prize, which are to encourage students to embrace multi-disciplinary work and make a difference in communities. Harmon worked in a series of community outreach roles in Baltimore, including at the Rails to Trails Conservancy, before starting his graduate studies at Penn. In a video, Harmon said he was introduced to local activists toward the end of his bachelor’s program at Loyola University Maryland who reframed his understanding of how structural racism shapes society, particularly in education, transportation, and housing.

“I found that urban planning was that great intersection between policy and architecture, particularly the subject of redlining and how particular neighborhoods were designed to fail African-American neighborhoods,” Harmon said. “That was a major reason why I entered the field of planning. I thought maybe we could un-design this issue that was created decades ago. And I thought maybe … we can reverse that, and create a new century of what urban neighborhoods will look like.”

The Witte-Sakamoto Family Medal was awarded to the City of Philadelphia’s GreenPlan Philadelphia, a 2011 plan to incorporate parks, trails, and open space into the city’s strategic plan. The plan, Servon said, is “a comprehensive open-space system that helped grow the Office of Sustainability and laid the foundation for many programs that are active around the city today.” Christine Knapp, director of the city’s Office of Sustainability, accepted the medal on behalf of the city.

In a panel discussion, Knapp and Servon spoke with Michael DiBerardinis, former managing director for the city and a professor of practice at the Fels Institute of Government, and Garlen Capita, a senior associate at WRT, the firm that developed the plan. Knapp said she regularly refers back to GreenPlan to see where progress has been made. Based on recommendations in the plan, the city has streamlined the process for planting street trees, created zoning categories for urban agriculture, and implemented requirements for new and renovated rooftops to incorporate cooler surfaces in order to reduce the urban heat island effect, among other initiatives. Capita, who is also a board member at PennPraxis, the Weitzman School’s consulting and community engagement arm, said that the success of GreenPlan was built on the same focus on partnership, multi-disciplinarity and community impact that the Witte-Sakamoto Medal is meant to honor.

“One of our key roles is working as a convener and a facilitator, bringing in a wide range of partners, stakeholders, and experts into the planning and decision-making process, and really working as true collaborators,” Capita said. “This starts from initial goal setting to creating a vision and framework for implementation. And this is based on the understanding that as planners, we don’t have all the solutions, but through an iterative data driven process we can work together to solve those problems and come up with those answers.”

This year’s award winners are recognized, along with 2018 and 2019 honorees, on a dedicated website that debuted in November.