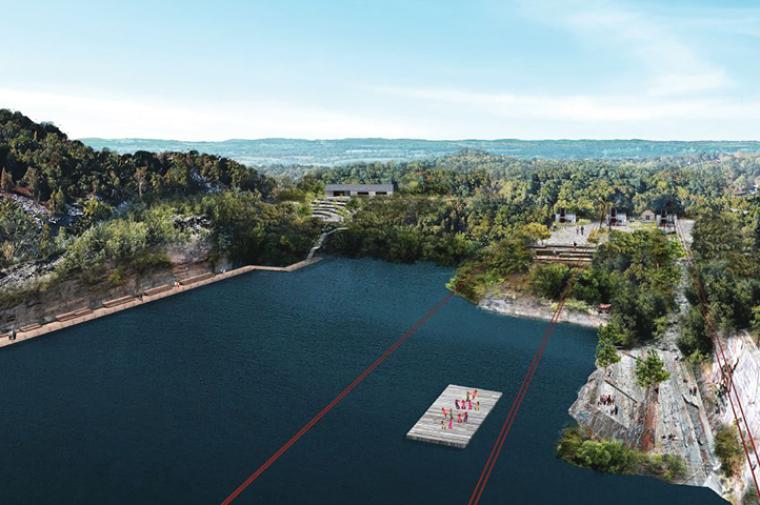 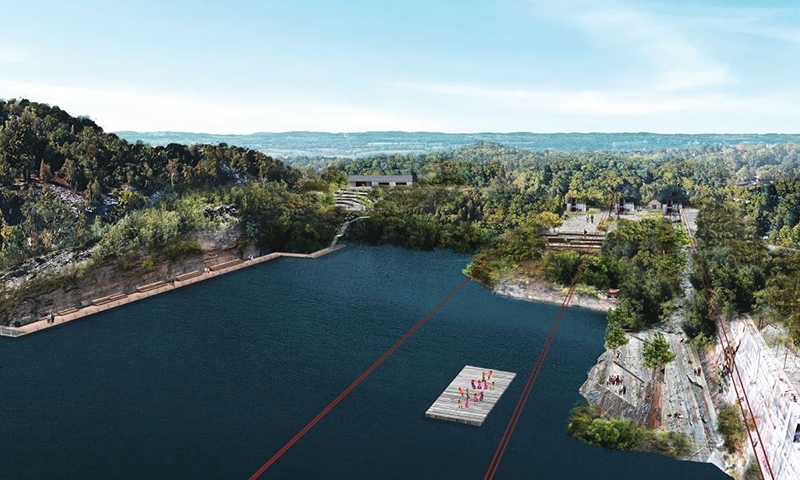 This summer, over 92 students and recent graduates and 31 faculty members across the Weitzman School—including programs in architecture, landscape architecture, city planning, urban spatial analytics, fine arts, historic preservation, Integrated Product Design, and several labs—worked on projects with the Design Fellows Program of PennPraxis, the non-profit design practice and community engagement arm of Weitzman.⁠ The students are employed as paid Design Fellows by PennPraxis to bring their skills to bear on projects for diverse communities in Philadelphia and far beyond.

On Friday, August 28, as part of the Weitzman School’s New Student Orientation, teams of Design Fellows described the work they engaged in over the summer. One team of four Fellows worked under the leadership of Ellen Neises (MLA’02), adjunct associate professor of landscape architecture and executive director at PennPraxis, to re-imagine a former slate quarry as a heritage park linked to a growing trail system in Pennsylvania’s Lehigh Valley. Three Fellows, Joshua Ketchum (MArch’20, MLA’20), landscape architecture student Jayson Latady, and architecture student Sharvari Mhatre talked with Neises about how the complex, sometimes competing, visions of community members for this beautiful natural area were navigated and helped enrich the project.

Ellen Neises: In 2014, through a studio, we became involved in an area called the Slate Belt, which is a rural part of Pennsylvania [northwest of Philadelphia] that does not have a lot of employment any more. And through series of subsequent studios and long-term relationships in the community, we were able to write a grant to the Community Development Block Grant Fund that provided support to take forward a project that the community really wanted us to work on. Josh, why don't you introduce what the nature of your work was this summer?

Josh Ketchum: This project really started as a studio project. In a 2016 studio we were looking at these exciting quarries in the Slate Belt and it seemed like one of those studio projects that's not real. Eventually the opportunity turned real, as Ellen said. There were several steps that happened along the way. We got to present to the community and show them our work and they came to our final reviews. And then the grant was awarded to the Slate Belt Heritage Center to work with PennPraxis to put forward a design. They are putting together a comprehensive plan for the region so the work we were doing had the opportunity to be included in this legal framework to make it a reality. We started meeting with the Slate Belt Heritage Center, which included narrowing down which quarry site we could possibly turn into a regional park. This would also be an anchor point for this area, which is economically depressed currently, but has a lot of amazing economic potential. Sharvari, Jayson, and I started meeting with the community and took a series of visits out there.

Sharvari Mhatre: These quarries are already really beautiful, so there was really little design intervention that we had to do to make it an attractive place for visitors.  When we went to site meetings a lot of members of the community would also join us. We would walk the site together and get input on to what they were expecting for the park to be like.

Because it's a project that spans multiple regions and communities, there was a lot of different input. Everyone was really passionate about the project and had a vision for what the final result ought to be. Some of the agendas they shared were a little contradictory, so we had to parse through that. Some members of the community lived nearby, and they were expecting the park to be a quiet, serene place for recreation. For others it was more important to have some revenue generation aspects.

Some people who have been in the Slate Belt region for a long time really wanted to focus on the history of slate making in the region and demonstrate the qualities of slate itself. So, for us, while we were designing it was kind of interesting to negotiate these different agendas to make this park a reality. When we presented different stages of the design to the community over Zoom meetings, they were involved in all aspects, from deciding which programs would go at different places to what materials we would use. It was active participation and made it an exciting project to work on together.

Josh Ketchum: We set up an initial meeting—and had people from the Lehigh Valley Planning Commission join. You really get to see these kind of power dynamics at play. We met with them as well as members from the Slate Belt Heritage Center. There's a trout hatchery right next to the quarry, which is an ecologically sensitive area. They came to the meeting. There were people from Northampton County. There were mayors. We got to meet this incredible cast of characters that told us [the kind of] stories which you can only hear when you're working in this kind of really engaged design project.

Jayson Latady: We got to spend the whole day out there with like 10 or so different people who kept adding on to our train of cars that was driving around and getting a sense of the area. When we actually got to the site we met with some of the experts there. One guy, Mike Piersa [an industrial historian], knew everything there was to know about quarries. We also met people who worked on the quarry in the past. It was a great opportunity to get to bring some of that into the project that we were working on.

Ellen Neises: All of these quarries are fenced off and getting filled up with trash as landfills, which is the most common thing that happens to former quarries. So, a lot of activists in the region have been working to stop the destruction of this cultural landscape. Obviously, putting garbage into the quarry holes is not good for the water supply, and it's a really water-dependent economy. People had in mind that the creation of a destination would bring people back to the Slate Belt and improve the economy. But what we saw was that that idea also created competition for resources. Money became a big issue and that changed the project strategies.

Josh Ketchum: It was very apparent that a prime concern was that this project would be taking money away from other resources. And there are some very real concerns that people have, like roads being paved. So, we had to reframe the project in a way that showed that not only did it have the possibility to bring in revenue and money to the region as an anchor destination, but also the site itself could function to bring in money and generate revenue. It worked out to make the project even stronger.

I would get texts from community members saying, “You can't have heritage. This needs to be an exciting site.” This one person wanted fireballs and the band Kiss to play in the center of the quarry. Other people would send really long emails about how it has to be completely preserved as a nature site. I believe everyone thought we somehow balanced those two, the fireballs and the nature, in the end. It was definitely part of the project to think through those issues.

Ellen Neises: We received incredibly long emails from all kinds of people in the Slate Belt, in the middle of the night, wanting to talk about their vision and their questions, one-on-one with one of us. You could see that this was important to a lot of people. But because they don't actually have any other design projects like this, there was no preconceived idea of what the boundaries of public engagement might be. There would be meetings and there was an expectation that you could write back and forth individually at length, for weeks, to communicate with every person. It's very time consuming, but it's also kind of a beautiful thing to go to a place where there's a bit of a tabula rasa about what constitutes engagement and conversation. I feel like there was a deeper sharing on their part, and probing, and that they're really sad that the summer is over. They're hoping that they're not going to stop seeing Jason and Sharvari and Josh!

Josh Ketchum: We definitely made some real connections. This started as a studio project that was just sort of a dream at one point, and it has so much support now, from key players in the region, that it feels like it really has the potential to become a reality. 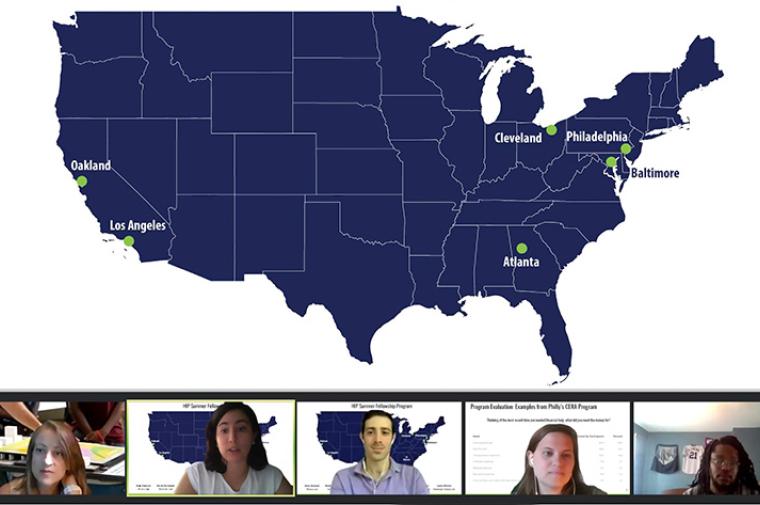 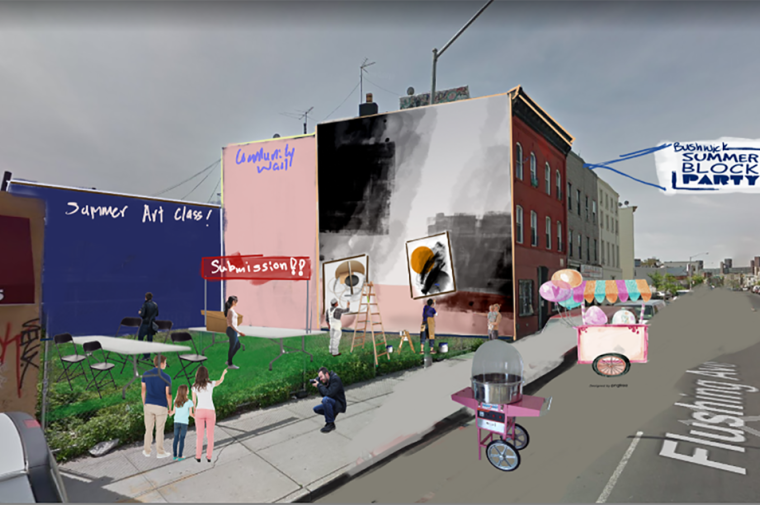