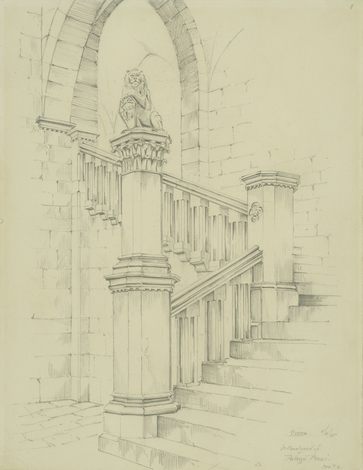 Franklin Miles Day began practicing architecture in Philadelphia in 1887, establishing a partnership (Frank Miles Day and Brother) with his elder brother in 1892. Day was a member in the Imperial Society of Russian Architects, the National Academy of Design, the National Institute of Arts and Letters, R.I.B.A., and the American Academy in Rome. He won the prize of the Architectural Association of London in1885, and his firm received the gold medal from the Philadelphia chapter of the AIA in 1918.
The collection includes office records, newspaper and journal clippings, photographs, correspondence, memorabilia, sixteen travel notebooks, honorary degrees, and awards. Included are two projects on the Pennsylvania campus, Houston Hall (1894) and Weightman Hall (1902).
Download Finding Aid